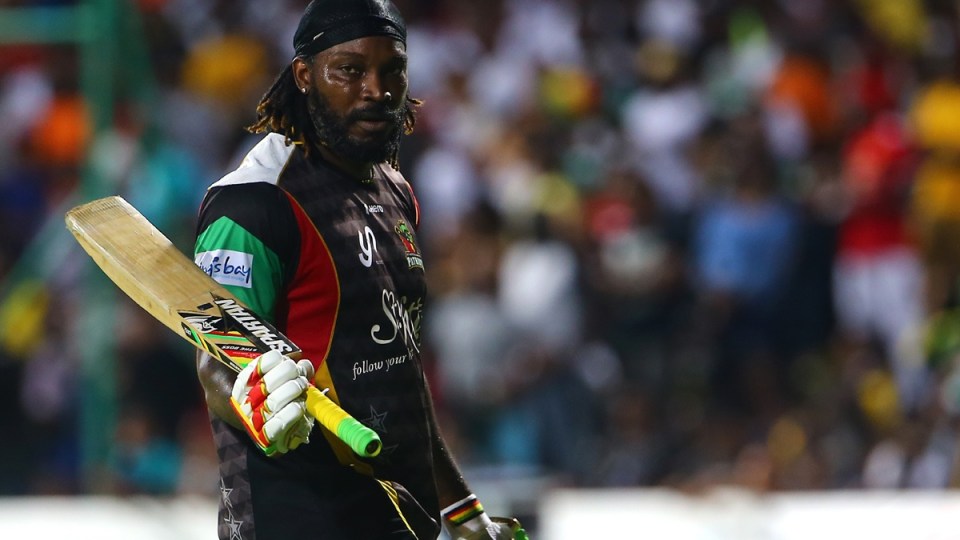 Chris Gayle is a Twenty20 gun for hire. Photo: Getty

West Indies batsman Chris Gayle smashed a series of world records in a blistering hundred before declaring himself as a better batsman than Australian legend Sir Don Bradman.

Gayle went ballistic in the Bangladesh Premier League final, belting an unbeaten 146 from 69 deliveries as his Rangpur Riders scored an excellent 1-206.

And Gayle’s innings should not be discounted because it came in the Bangladesh league, with some of the best short-form cricketers in the world – namely Sunil Narine, Shahid Afridi, Shakib Al Hasan and Kieron Pollard – all playing for the Dhaka Dynamites.

They were no match for Gayle and McCullum, though, who moved the Riders from 1-5 to the imposing total.

Cricket journalist Mazher Arshad said afterwards that Gayle was asked if he considered himself as the Bradman of Twenty20’s – or the greatest Twenty20 batsman.

Gayle responded: “No. I am actually the greatest batsman of all time.”

After the victory, Gayle, posting a video of himself with the trophy, said: “Give thanks to most high. Words can’t explain. Another title. Just giving thanks to everyone.”

And a string of Twitter tributes from cricket figures came his way.

Lets get this out the way before the celebrations derail any sensible message. @henrygayle you are an absolute legend! Best seat in the house today. Rangpur Rider boys, we did it the hard way, but got the chocolates. Respect for all the squad. Winning titles is never easy, beers!

Gayle’s comments come less than two months after his friend, Donovan Miller, told a Sydney court he had noticed the star cricketer was “very reserved and scared” around people.

Miller’s comments came during a defamation trial which Gayle won against Fairfax Media.

Fairfax alleged Gayle exposed himself to a masseuse during the 2015 Cricket World Cup.

“At this point he’s very reserved and scared … especially with females, because he always thinks someone’s out to get him,” Miller said.

Gayle was not retained by his Big Bash League side the Melbourne Renegades after inappropriate comments he made to then-Network Ten presenter Mel McLaughlin.

Gayle was fined $10,000 and forced to apologise for his comments.

But current Renegades player and Australia veteran Brad Hogg suggested that he could return to the BBL soon.

“You want the best players available,” he said at a press conference.

“If he’s available then I don’t see no reason why he can’t come back.

“It’s disappointing what has happened in previous years but it’s up to everyone to pull their socks up and make sure that doesn’t happen down the track.”