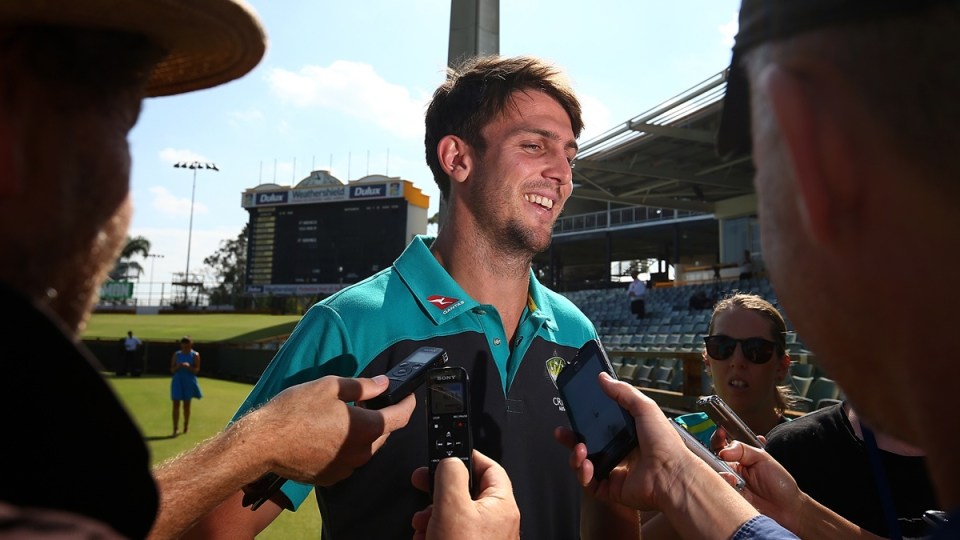 Mitchell Marsh is in the mix for the third Test. Photo: Getty
exclusive

Australia’s last Test at the WACA is one that could win the Ashes – it’s an exciting prospect that should have all the players up and about.

The WACA has been a happy hunting ground for us and I have fond memories of securing the 2013-14 Ashes series there. Even when we lost in the 2010-11 series, we still had a good win in Perth.

As bowlers, we always want the WACA pitch of old and sometimes, the pace and bounce could make you feel like you were a DK Lillee or a Jeff Thomson when you were bowling.

But it has been flat and hard a fair bit recently and, if I’m being honest, it probably was not my most favoured Australian venue.

For all the talk about the pitch, it’s often a great place to bat if you can get yourself in.

I will never forget playing against India there in 2012.

We bowled them out for 161 on day one and had 23 overs to bat before stumps. Amazingly, we finished on 0-149 – and Davey Warner already had a hundred!

There’s been a lot of talk about England’s off-field behaviour and the media attention it has generated.

We’ve been on the receiving end of that press spotlight on overseas tours. They are trying to find anything off-field to get you with.

Curfews have been a hot topic lately and I’m not sure if they work. Grown men should be able to make wise decisions.

Personally, I stopped drinking five-and-a-half years ago and I must say I’ve benefited a lot.

It was a decision I made for my longevity in cricket and I appreciate it’s a very personal choice. For me, it was about how committed I was.

Drinking was also affecting my judgement and I wasn’t controlled enough.

There’s loads of benefits health-wise, with recovery, mentally, but there’s also the fact that you just don’t get in trouble.

There aren’t these little instances … you don’t get caught up in that stuff.

As for curfews, I’ve been involved in them before and I think it’s a bit of a schoolboy/young child sort of decision.

Speaking of decisions, Australia’s selectors have a tough one to make when picking between batsman – and my Victorian teammate – Peter Handscomb and all-rounder Mitchell Marsh.

I think any call on the team will come down to what the wicket looks like on the day.

Seven years ago against England, we won in three-and-a-bit days playing four quicks.

But I can remember a game against New Zealand in 2015 where it was particularly flat and hard and was tough for bowlers. If the deck is like that, you probably prefer that all-rounder in Mitchell Marsh.

We’ve seen that the WACA can hurt teams who don’t pick enough bowlers.

If it’s a green wicket, they should keep Pete in, but if it’s flat, they will probably go with Mitchell.

Pete has a great Test record so far but guys like Usman Khawaja and Shaun Marsh are probably going a bit better at the moment.

I’m looking forward to seeing Mitchell Starc bowl this week and if he wants a template for WACA success, he should look how Mitchell Johnson – who took 45 wickets in seven Tests there – did it.

As for my cricket, I’m feeling good.

I recently had a rest in the Sheffield Shield and that was nice as I had a big workload for Victoria before that.

The rest was to get the body right in case an opportunity arises and I can play in the back end of this Ashes series. I’m fit and ready to go if called upon.

I’m now in Adelaide, preparing for the Big Bash League, and I’m really excited to play in front of the big Strikers crowds.

But I’ll write about that another time. For now, all eyes are on Perth. I’m tipping us to win – and do it inside four days.

The Ashes: Peter Siddle writes on booze bans, curfews, selection and the WACA