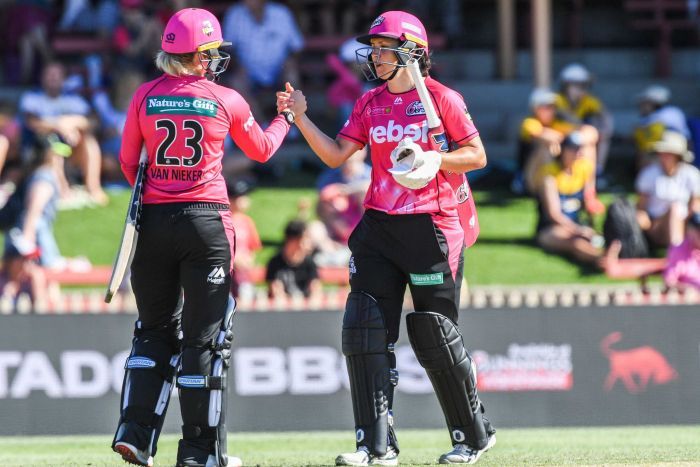 The platform set by Alyssa Healy’s rapid-fire 49 helped the Sixers to victory with eight balls remaining, as they reached 4-146 in front of a 4812 attendance at a carnival-like North Sydney Oval.

The Australia wicketkeeper and Sixers opener swung the bat lustily before being caught on the boundary to end a 27-ball knock.

Ashleigh Gardner followed her record-breaking 114 in the 86-run win over Melbourne Stars on Saturday with a pivotal 47 off 35 balls to help the Sixers home.

The Thunder provided stiffer opposition on Sunday and posted 6-142 built around a composed 58 from captain Alex Blackwell.

But wickets fell at regular intervals for the Thunder stymieing any likelihood of reprising a team record 6-200 set in their opening win on Saturday.

Sixers captain Ellyse Perry, playing a day after one of her sixes struck a young spectator in the head, failed with the bat when she was run out for 12, but she shone with the ball taking 2-15, including the key wickets of Rachael Haynes (17) and Harmanpreet Kaur (29).

The Scorchers posted an impressive 6-188 from their 20 overs, built around English all-rounder Nat Sciver’s 84 from 46 deliveries, a big-hitting knock that included three sixes and 11 fours.

In reply, the Heat commenced a challenging run-chase in disastrous fashion slipping to 3-38.

In-form opener Beth Mooney looked dangerous hitting 13 off the opening over but popped up a simple catch to end her innings of 23 off 12 balls.

South African number three Laura Wolvaardt was run out without facing a ball, while Brisbane’s other import Deandra Dottin was bowled for just 10, leaving the Heat requiring 110 off their final 10 overs.

Delissa Kimmince kept the Heat innings together with an aggressive innings of 87 not from 54 balls to help her side reach 9-170.

New Adelaide Strikers captain Suzie Bates became the latest WBBL centurion, as she paved the way for a crushing 83-run win over the Hobart Hurricanes.

The Strikers made it two wins in as many days against the Hurricanes with their 6-176 way too many for the visitors who were bowled out for 93 off 18.5 overs in Adelaide.

New Zealand opener Bates was the undoubted star for the Strikers, hitting 102 off just 65 balls.

Bates’s ton was the competition’s second in as many days following Ashleigh Gardner’s competition-high 114 on Saturday for Sydney Sixers. Just two centuries were scored in the first two seasons of the WBBL.

Sophie Devine played a valuable supporting role to Bates with 43 off 29 balls, sharing a whirlwind stand of 117 for the third wicket.

The Hurricanes lost by 45 runs on Saturday and an even heavier defeat looked likely from the very start of their innings after they slipped to 4/29.

Their slim hopes were extinguished in part to some impressive bowling from leg-spinner Amanda Wellington who took 3-9 off four overs as the middle-order failed to fire.