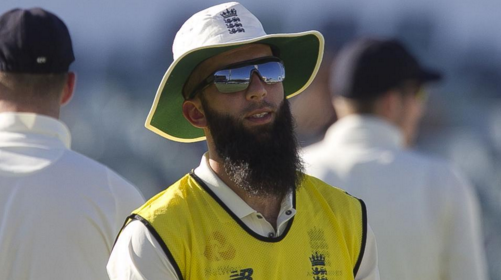 Moeen said 'somebody (in the crowd) asked me what time my kebab shop opened'. Photo: Twitter

Cricket Australia has reminded fans they risk bans and police action if they racially vilify players, with the governing body hoping witnesses will come forward after revelations about a comment directed at Moeen Ali.

Moeen didn’t report the incident that occurred while fielding at Adelaide Oval to England’s team management or the match referee during the second Test.

It came to light when he spoke to reporters in Perth.

“Somebody (in the crowd) asked me what time my kebab shop opened,” Moeen said.

The allrounder described the exchange as “nothing major” and added he is “not fazed whatsoever” by anything he has heard from Steve Smith’s side or the crowd during the Ashes series.

Cricket Australia (CA) has a zero-tolerance policy to any form of anti-social behaviour, having gone to great lengths to crack down on racial vilification.

One notable recent example came last summer during the Hobart Test, when Hashim Amla reported an offensive message that was displayed on the fence.

CA and local police were able to identify the man responsible for the racist remark with the help of witnesses and CCTV.

He was formally charged while CA issued a three-year ban from attending any official cricket match in the country.

“Our message to any fan attending a match is that if you display anti-social behaviour you will be removed and risk being banned from any cricket match across Australia, along with police action,” a CA spokesperson said on Saturday.

“We encourage anybody who may witness this at one of our matches to report the matter to security or a member of staff immediately.”

The same message is delivered by high-profile Australia players in video clips that are regularly broadcast on the big screen at grounds during games, warning fans of the consequences.

In the absence of any formal complaint, CA must rely on fellow spectators to help call out any cases of racial vilification.

Adelaide Oval was the stadium where a supporter of AFL club Port Adelaide threw a banana at Adelaide forward Eddie Betts, one of the sport’s most talented Indigenous stars, in 2016.

Betts and Port Adelaide’s Paddy Ryder were also subjected to racial verbal abuse from the Adelaide Oval outer this year, prompting the AFL Players’ Indigenous Advisory Board to make a plea for an end to such abuse.

Asked if he had to contend with any verbals on the pitch, Moeen noted “from the crowd you get quite a bit”.

“You get some good ones and you get some not so good guys,” he said.
Moeen noted sledging in the middle has been benign – restricted to jibes about his elevated position in the batting order after being pushed up from No.8 to No.6.