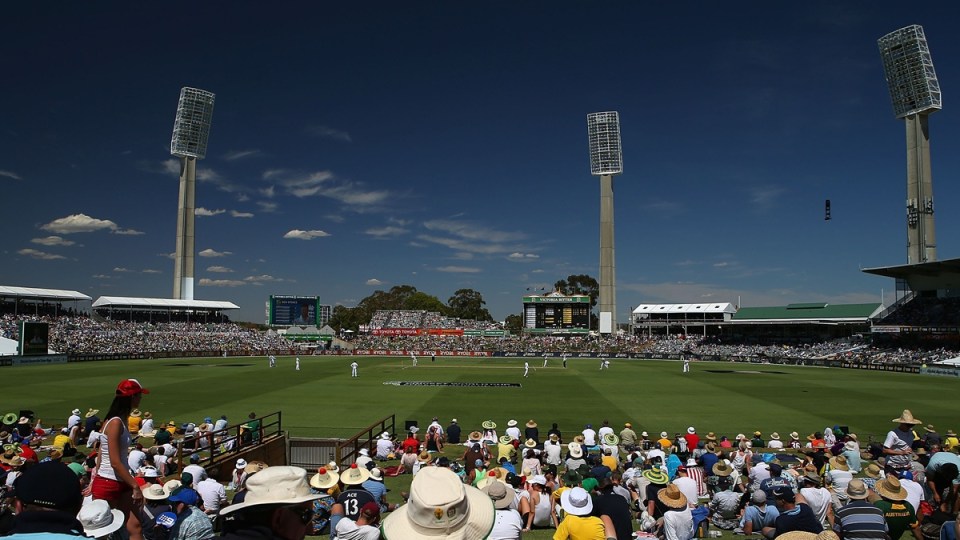 The WACA is expecting a big crowd against England. Photo: Getty

Perth’s WACA Ground has played host to some of Australian cricket’s most exciting moments.

The old venue – widely regarded as one of the most iconic in the cricket world for its fast, bouncy pitch – hosts its final Ashes Test next week as England tries to breathe life into what is already shaping as a one-sided series.

The state-of-the-art Perth Stadium, which will house 60,000 fans, will replace the WACA as Western Australia’s premier cricket venue when it opens in January, a move inspired by commercial reasons more than anything else.

Just 23,000 can fit at the WACA – and that’s when the temporary seating is brought in.

It means that Australia’s appearances there will only take place against “smaller” nations, with Western Australia’s Sheffield Shield matches to be the only regular top-level cricket still played at the ground.

“To move away from the WACA is pretty sad,” former Australia bowler Hughes told The New Daily.

“I always thought they would revamp and upgrade the facilities … it was just a fantastic ground to play cricket at. It had a lot of character.”

The beauty of the WACA lies in its quirks.

For starters, the pitch – at least up until recently – was a haven for fast bowlers who could exploit the bounce in the surface.

“That was the quickest pitch in Australia. It was very, very conducive to fast bowling.”

Ambrose’s record at the venue — 24 wickets in three Tests at 12.91 — is staggeringly good.

But the WACA wasn’t just for bowlers.

As former Australia captain Greg Chappell can attest, it was also good to bat on — if you managed to get your eye in.

“It was hard to ‘get in’ – but once you did, you could predict the bounce,” he told The New Daily.

“If it landed halfway down it was going head-high or above. If it was pitched up, it was still going to bounce but it was coming onto the bat.

“The better bowlers, in particular the better fast bowlers … they could get the ball to bounce quite awkwardly without a great deal of effort. So you had the counter-balance there.”

The WACA is also unique for what is almost a complete lack of shade.

You can almost guarantee it will be baking-hot during the venue’s summer Test, leaving touring sides desperate for any sign of the ‘Fremantle Doctor’ – the afternoon breeze that blows in from the Swan River.

The ground’s grass hill was never replaced with a grandstand full of seating, either, and the old-fashioned manual-operated scoreboard has defied the odds to stand the test of time.

“It’s really a bit of a shame that there won’t be as much cricket played there,” Ambrose said.

“I’m just hoping that the new ground that they’re building will be as good [as] or better than the WACA, in terms of the pitch and bounce.”

Chappell agreed it was sad to see the WACA phased out of big-time cricket but that “it doesn’t really fit the modern requirements of an international venue” anymore.

He, like Hughes and Ambrose, will always have fond memories of the ground, though.

In the WACA’s first ever Test, in December 1970, Chappell, on debut himself, came to the crease with Australia 5-107 against England.

He proceeded to make a brilliant 108, an innings that set the tone for a glittering career.

“It’s a nice memory to have. It was a wonderful occasion, the first Test match in Perth,” Chappell said.

“Perth really went out of its way to make a big occasion of it.”

Other stand-out moments at the WACA for Chappell came in 1974, when the affable Walters hit a six off the final ball of the day to bring up a last-session hundred, and watching pace duo Lillee and Jeff Thomson bowl in tandem at the venue.

“Having them bowl together for the first time [at the WACA] was quite remarkable,” he said.

While the WACA Test during the 1982 Ashes series is remembered for all the wrong reasons – Australian seamer Alderman tackled an English pitch invader and dislocated his shoulder in farcical scenes that saw 26 people arrested – (Merv) Hughes produced a happier memory in 1988.

The much-loved cult figure enjoyed an excellent record at the ground, taking 39 wickets at 19.28 in six Tests there. But it was a hat-trick against the West Indies that stands out. Even if he didn’t know much about it at the time.

Hughes took two wickets in as many balls to end West Indies’ first innings, although they were separated by one over.

And that meant he didn’t know he was on a hat-trick when he ran to bowl his first ball of the second innings, with which he dismissed Gordon Greenidge LBW.

“If you got the right length over there you could do some damage,” Hughes said.

“I always felt confident knowing the conditions there would suit my bowling.”

Although Johnson and Lillee have claims, arguably the best spell of fast bowling at the WACA belongs to Ambrose.

He took 7-25 against Australia in the 1993 Perth Test, including a stunning 32-delivery stint where he took seven wickets for just one run.

“That is something people dream of,” he said.

“I never expected that to happen. It was certainly one of my best spells of bowling.

“It certainly is a career highlight, because not only did it help us win the series … when we came to Australia that tour, we were the underdogs.

“We had a very, very young team. To win that series was very satisfying and I really did enjoy it.”

More recently, McGrath bagged a hat-trick against the West Indies, while Hayden plundered Zimbabwe everywhere and Gilchrist sent statisticians scrambling for the record books with an incredibly fast century against England.

Touring sides have rarely won at the WACA in recent years, and England heads there next week knowing they have lost seven Tests in a row in Perth.

Aussie opener David Warner will be licking his lips, too, having scored 803 runs at 89.22 at the ground, including three centuries (more than any other batsman).

Warner will probably get to play another Test on the ground as it won’t be entirely lost to the cricket calendar.

While a Test at the WACA in the 2018-19 season seems unlikely, even against Sri Lanka, the visit of Pakistan and the West Indies in the following summer could see the ground used.

“There’s a very clear understanding that any games that we have scheduled that would demand a crowd of over 15,000 a day would go to the new stadium,” WACA chief executive officer Christina Matthews told The New Daily.

“Anything under that will go to the WACA Ground.”

So, in the meantime, what will be done with the venue, apart from Shield matches?

Perth’s Twenty20 team, the Scorchers, will play home games at Perth Stadium, while the current set-up of the domestic one-day tournament may see games only played there occasionally.

“We hope to redevelop the ground so that it has much more community use than it does now,” Matthews added.

“The facilities will be available for the public and the broader cricket community to hire.

“All of those facilities will be things that the broader community can use.”

The Ashes: The iconic sporting venue preparing to say goodbye