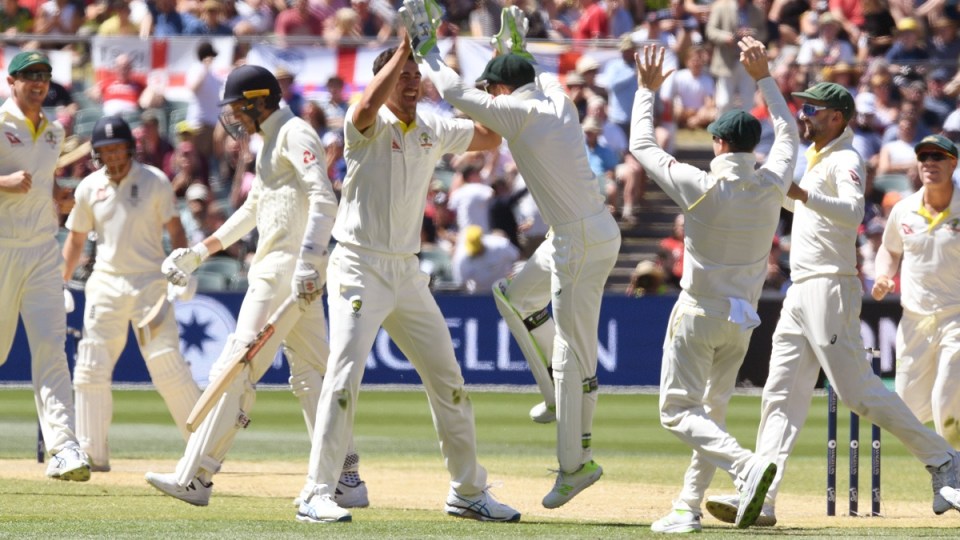 The thrilling contest – so evenly poised after Tuesday evening’s conclusion – was swung by a crucial Hazlewood double-salvo before Mitchell Starc (5-88) mopped up the tail as England, chasing 354 for victory, were bowled out for 233.

The tourists resumed at 4-176 and full of hope with captain Joe Root unbeaten on 67 and night watchman Chris Woakes on five.

But Hazlewood (2-49) struck with just the second ball of the day, having Woakes caught behind by wicketkeeper Tim Paine.

Woakes unsuccessfully reviewed the decision and the Adelaide Oval crowd was roaring just two overs later when Root fell without adding to his overnight score.

The England skipper inside-edged another Hazlewood delivery, and Paine moved quickly to take a good catch and raise Australian spirits.

England’s start then went from bad to worse when Lyon got Moeen Ali for the fourth time this series, lbw for two.

Jonny Bairstow (36) gave the Barmy Army something to cheer about but he was quickly running out of partners as Starc wreaked havoc with the second new ball.

Starc first had Craig Overton lbw for seven and then added the scalp of England villain Stuart Broad, caught behind for eight.

And Bairstow was the last man to go, bowled, to give Starc a five-wicket haul and spark celebrations among Steve Smith’s side.

A delighted Hazlewood said taking the key wicket of Root was “pretty special”.

“The start was obviously important so to get those early two, especially Joe Root, really set us up for the day,” he told the Nine Network.

“It’s pretty special. He [Root] is obviously a class player and probably the key to their batting. You’ve just got to put the ball in the right areas.”

Hazlewood acknowledged he was nervous after day four ended, when England had every chance of claiming a miraculous victory after some impressive batting.

“I think there was probably a few nerves there for each individual,” he said.

Spinner Lyon was more confident, telling Nine that he never doubted Australia would pull off an “unbelievable win”.

“We knew if we hung in there this morning we’d get the rewards for our efforts last night,” he said.

Australia captain Steve Smith added that he didn’t think much about his failure to enforce the follow-on and that he was very proud of his side.

Australia’s win gives them a 2-0 lead, meaning they can wrap up the series in Perth later this month.

England’s record at the WACA is dreadful, too, having won just one won Test at the venue – 29 years ago.

England has lost its last seven Tests at the venue, which will stage its last Ashes Test from December 14.