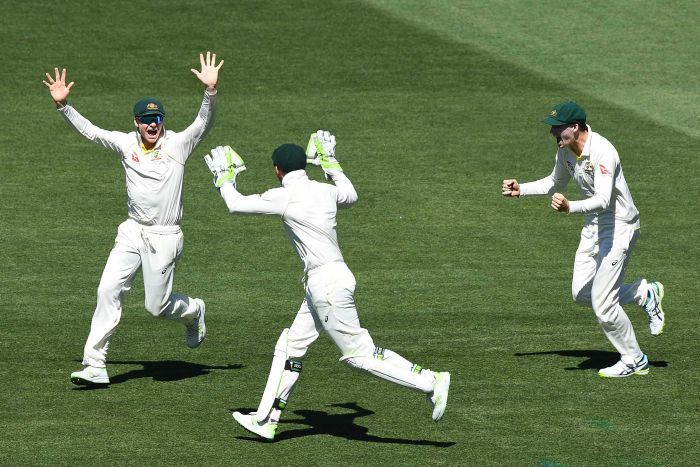 Steve Smith took a sleeping pill to settle his nerves but still only managed four hours’ kip as he obsessed over his decision not to enforce the follow-on in Adelaide.

The Australian skipper’s relief was palpable after his side snared six wickets in the opening session on day five to claim a 120-run victory and a 2-0 lead in the five-Test Ashes series.

Smith’s contentious call to not make England bat again was compounded on Tuesday evening when he burned two reviews in quick succession and dropped a catch in the slips.

“I had to have a sleeping pill last night. It has been a pretty tough 24 hours if I’m being honest,” he said on Wednesday.

“It’s all part of being captain of your country. You have to make difficult decisions and sometimes you’re going to make the wrong decision.

I’ll think back and reflect over the next day or so and think what I could have perhaps done differently and could have done better, and areas that I can continue to improve in my leadership.”

Former Australian paceman Jason Gillespie on Wednesday said Smith had been “thrown under the bus” by his own camp over the decision not to enforce the follow-on.

Australia’s bowling coach David Saker had questioned the call after England got within 178 runs of victory at stumps on Tuesday.

“In hindsight, we didn’t get an opportunity to bowl with the new ball under lights – that was our chance,” Saker noted.

“Maybe we got it wrong. At the end of the Test match we will review that.”

Smith explained that wearing out England’s pacemen was just as much a factor as preserving his own.

“If you give them a rest and keep the England bowlers bowling … they bowled (149) overs in the first innings,” he said.

“If you can tire their bowlers early on in the summer then it can make a big difference at the back-end.”

Smith’s nerves were frayed when play commenced on Wednesday but Josh Hazlewood’s dismissal of Joe Root on 67 quickly helped him to settle.

“I thought his length this morning was exceptional,” Smith said. “To get the wicket of Root really put us in a good position and I could breathe a bit more easy then.”

Shaun Marsh took home man-of-the-match honours after his anchor-role first-innings century that proved the difference between the two sides.

His captain lauded Marsh’s patient knock which ultimately took the game away from England.

“Outstanding,” said Smith. “Obviously after being sent in on a day-one wicket, I thought it was probably at its best at that point in time, personally. But I thought he played exceptionally well.

“He left really well, he was patient, and he put away the bad balls. That’s batting, isn’t it? He did it to a tee and I’m really proud of his performance.”

Marsh came into the series under pressure to do well, and while his vital knock helped set up the win, he said there was still work to do.

“Obviously it was a fantastic feeling to score an Ashes hundred on my home soil in Adelaide in front of my dad, my wife and my little son was pretty special,” Marsh told the ABC.