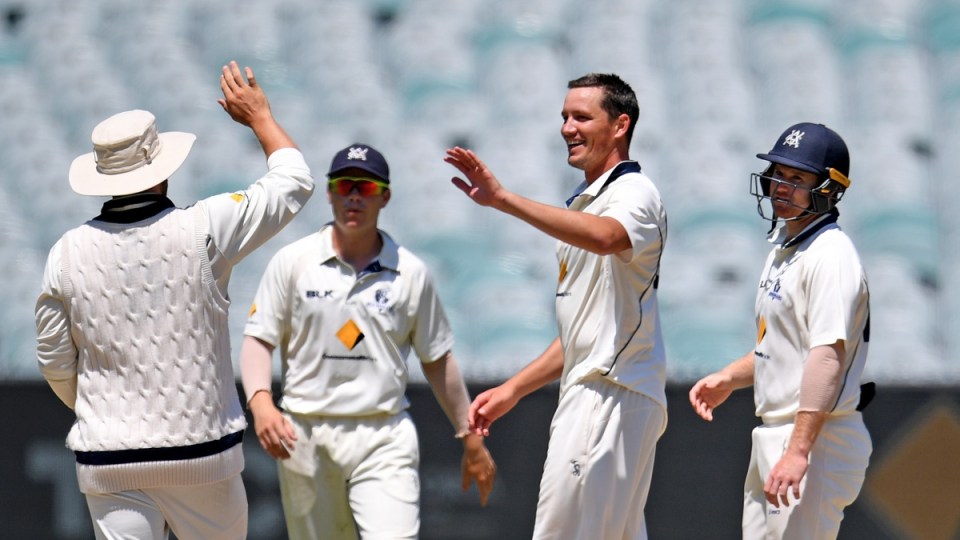 Bowler Chris Tremain (second right) of the Bushrangers celebrates after the dismissal of Will Bosisto at the MCG. Photo: AAP

A fourth draw of the season on Wednesday wasn’t enough to drag Victoria off the bottom of the Sheffield Shield table, but the stalemate against Western Australia allowed Glenn Maxwell to build his case for a Test recall.

Coming off a sublime 278 against NSW, Maxwell helped set up Victoria’s first innings total of 450 with a commanding knock of 96 at the MCG.

“He couldn’t do much more, could he?” skipper Aaron Finch said of Maxwell.

“When you have the disappointment of getting dropped – the selectors say to get more runs – and you answer with a big double century that’s a fair way to do it.

“Then to back it up … that’s what would be most pleasing for him.

“His technique looks in fantastic order, his shot selection (too), he’s reined his game in so much but he’s still (at a strike rate) of 50 or 60.

I’m so happy for the way he’s played over the last few games. To answer the questions that people had about his game has been extraordinary.”

Wicketkeeper Seb Gotch (98) fell agonisingly short of his maiden first-class century as Victoria posted a first-innings lead of 207 runs after the Warriors made 243 having won the toss and batted first.

WA spinner Ashton Agar finished with figures of 4-119 from 50 overs in his first-class return after suffering a broken finger on Australia’s tour of India.

The Warriors progressed to 3-281 at tea on day four and Finch and counterpart Mitch Marsh agreed no outright result would be reached, ending the match.

Openers Jonathan Wells (107) and Will Bosisto (98) endured a tricky session after tea on day three but batted the visitors to safety with a 195-run partnership.

Bosisto top-scored with 57 and wicketkeeper Josh Inglis made a handy 46 in the first innings, while Victorian spinners Fawad Ahmed and Jon Holland took three wickets each.

“It was one of the flattest wickets I’ve ever played on,” Marsh said. “It was disappointing that we couldn’t get a result, but I thought we fought hard.

“It was always going to be very hard to take 20 wickets on that wicket … it was a long four days.”

The result means Victoria remains bottom of the Shield table after five rounds without a win, while the Warriors are fourth.

The Shield season will resume in February after the Big Bash League break.