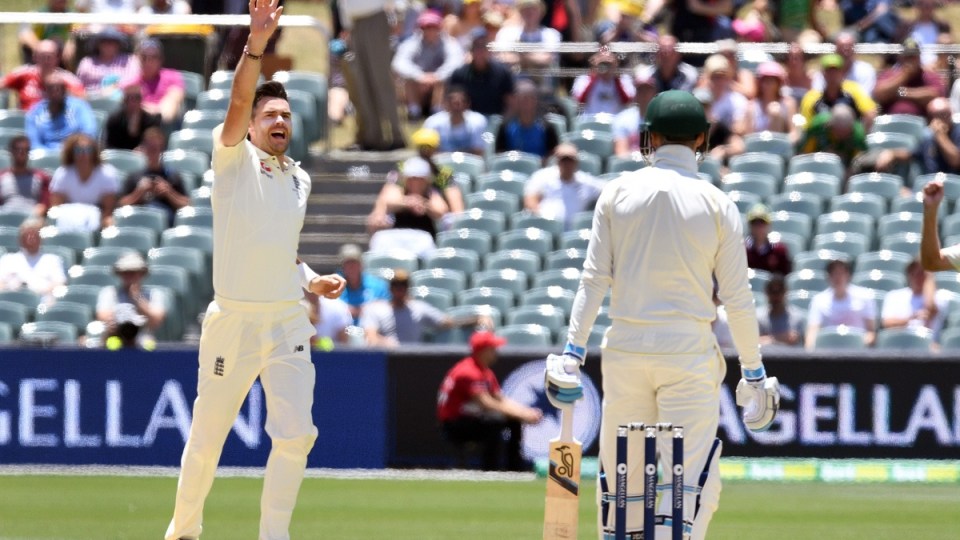 England has slipped to 2-68 at dinner on day four of the pink-ball Ashes Test, with Nathan Lyon hurting the tourists’ hopes of completing a record run-chase of 354 at Adelaide Oval.

Joe Root’s side require a further 286 runs to level the five-Test series but history suggests that won’t happen.

Australia’s 6-315 against England in 1902 remains the highest fourth-innings total in a successful Test run-chase at Adelaide Oval, while England has never chased down more than 332 to win a Test.

Tuesday’s opening session ended with Steve Smith’s side being rolled for 138 in its second innings, a by-product of Jimmy Anderson’s maiden five-wicket haul in Australia.

Alastair Cook and Mark Stoneman started positively in response but Lyon snapped their 53-run opening stand, removing the former captain for 16 with the help of the Decision Review System (DRS).

Smith agonised over whether to review Lyon’s lbw shout that was turned down by umpire Chris Gaffaney, having opted against referring an equally confident lbw appeal from Josh Hazlewood that came when Cook was on one.

On both occasions, ball-tracking technology suggested Gaffaney got it wrong.

Stoneman departed later in the session for 36, prodding at a wide delivery from Mitchell Starc to hand Usman Khawaja a low catch at gully.

Lyon, who has claimed more Test wickets this year than any other bowler, continued his productive summer and regularly beat the bat.

Root, who is seven not out, is yet to bat at night in the game.

Anderson finished with figures of 5-43 from 22 overs, dismissing nightwatchman Lyon, Peter Handscomb and Starc as he continued a pink-ball masterclass that started under lights on day three.

Earlier in the day, ex-English wicketkeeper Matt Prior poured more fuel on the sledging fire, insisting that some of his former teammates were “quite upset” with a range of comments that have not “come out for various reasons”.

Prior inflamed the situation, telling BBC Radio: “There’s a lot that’s gone on that I think the England players are quite upset about, and rightfully from what I’ve heard.

“There’s been a lot of chat on the pitch that hasn’t got anything to do with cricket and quite frankly shouldn’t be on a cricket pitch.

“[It is] stuff that hasn’t come out for various reasons and whatever it may be.”

Prior continued to suggest that Australian players had crossed the line.

“You have to go deeper if you want to try and get a reaction,” he added.

“You have to say something that’s going to be pretty, pretty fiery and potentially personal.”

Mike Hussey – who played against Prior many times for Australia – said he was stunned by the revelations.

“I was a bit shocked,” he told Fox Sports News.

“I don’t know what he’s trying to achieve out of all these provocative comments.

“These comments, from afar mind you, you really need to be backing it up. It’s sort of teasing us really, you’ve got to back it up with some hard evidence.

“I’d be very surprised if he’s accurate here. The lines are very clear on the field [and] the umpires are very strict these days.”

The Ashes: England chases 354 after cleaning up Australia in morning session