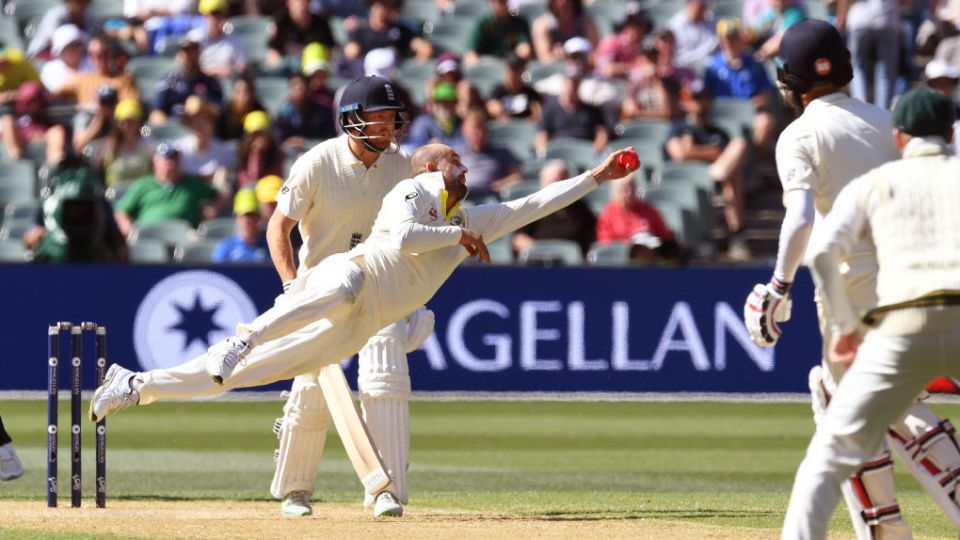 Nathan Lyon backed up some excellent bowling with a superb catch. Photo: Getty

Australia embarrassed England’s top order before Jimmy Anderson returned the favour under lights on an eventful third day of the pink-ball Test at Adelaide Oval.

Steve Smith opted against enforcing the follow-on after his attack made a mockery of the tourists on Monday, rolling them for 227.

The hosts were 4-53 at stumps, holding a 268-run lead thanks in no small part to Nathan Lyon’s four-wicket haul plus precise pace bowling from Pat Cummins, Mitchell Starc and Josh Hazlewood.

Anderson found his mojo in an 11-over opening spell under lights that cost 16 runs and featured the dismissals of Cameron Bancroft and Usman Khawaja.

Nightwatchman Lyon was three not out at stumps, while Peter Handscomb will also resume on three.

Dar intervened when Joe Root, unimpressed with the time it took Lyon to recover from a blow to his thigh in the final over, confronted the unbeaten batsmen and needled them while everybody walked off.

Despite a wagging tail and four quick wickets, the tourists have little room for error as they seek to avoid a defeat that would severely loosen their grip on the urn.

Only one team has battled back from 2-0 down to win an Ashes series, Don Bradman’s Australia in 1936-37 on home soil.

Root will likely regret his decision to bat first and England’s inability to turn the screws when Australia slipped to 5-209 early on day two.

But his top order’s tumultuous start to an innings that spanned 76.1 overs will cause even more introspection.

England started day three at 1-29 then crumbled to 7-142 before Craig Overton, on debut and batting at No.9, embarrassed his teammates by finishing top-scorer with 41 not out.

Lyon clutched an astonishing one-handed catch off his own bowling to remove Moeen Ali for the third time in the series, while he also dismissed Anderson, Alastair Cook and Stuart Broad to make it a world-best 55 scalps for the calender year.

Root lasted just 10 deliveries, struggling to hide his disbelief after playing an expansive drive that resulted in a thick edge flying to Bancroft at third slip.

Cummins had Root and Dawid Malan out edging, while Starc held catches off his own bowling to account for Jonny Bairstow and Chris Woakes.

The Ashes: Australia in box seat in Adelaide after Nathan Lyon’s star turn