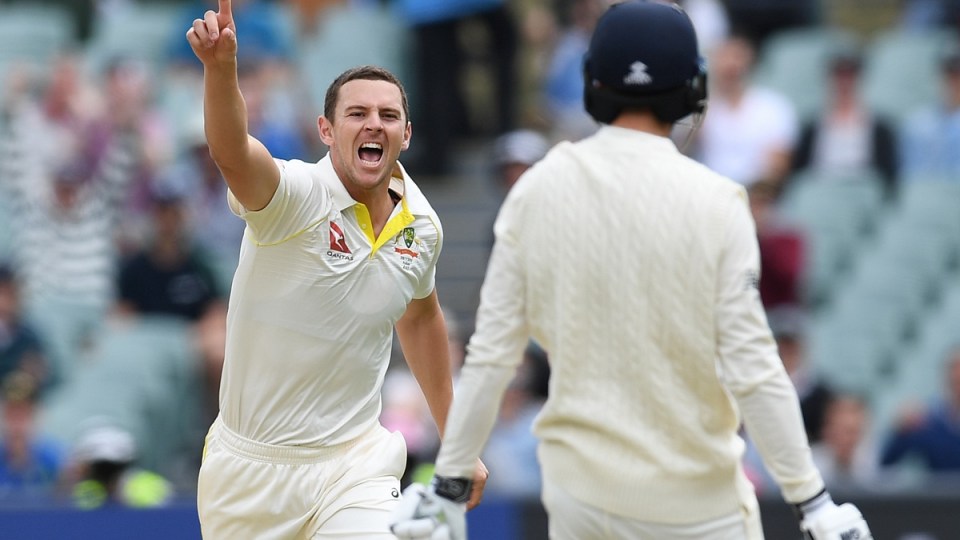 Josh Hazelwood claims the wicket of James Vince in the second over.

Australia has seized an imposing first-innings lead of 215 runs in the pink-ball Ashes Test at Adelaide Oval, rolling England for 227 shortly after dinner on day three.

Steve Smith, sniffing a 2-0 lead in the five-Test series but also concerned about his fast bowlers’ workload, opted against enforcing the follow-on.

Joe Root’s side resumed at 1-29 on Monday, having sent Australia as Shaun Marsh powered the hosts to an imposing total of 8(dec)-442.

England coach Trevor Bayliss insisted on Sunday night that his team could claim a remarkable victory. It was an optimistic view but the prospect of the tourists holding on for a draw was very much on the cards.

Instead it crumbled to 7-142 before Craig Overton and Chris Woakes finally showed some resistance in a 66-run stand.

Overton, on debut and batting at No.9, finished 41 not out to be England’s top-scorer in an innings that spanned 76.1 overs.

A leaping Nathan Lyon finished the leading wicket-taker with figures of 4-60. Precise pace bowling from Pat Cummins, Mitchell Starc and Josh Hazlewood also sapped what little confidence the tourists started the day with.

Lyon grabbed an astonishing one-handed catch off his own bowling after tea to dismiss Moeen Ali for the third time in the series, while the offspinner also trapped Jimmy Anderson lbw and had Alastair Cook and Stuart Broad out edging.

Root was summoned to the middle during Monday’s second over, when an errant drive from James Vince led to Hazlewood’s only wicket and a regulation catch for keeper Tim Paine.

The partnership between the skipper and former captain Cook loomed as the most imposing roadblock for Australia on day three. England’s two most experienced batsmen shared a 248-run stand during a home day-night Test earlier this year.

Root lasted just 10 deliveries, struggling to hide his disbelief after playing an expansive drive that resulted in a thick edge flying to Cameron Bancroft at third slip.

Cummins removed both Root and Dawid Malan, also out edging, in the opening session.

The Aussies are on the charge in Adelaide! https://t.co/MboRNr0wWd #Ashes pic.twitter.com/0ITx8R47J0

Starc held catches off his own bowling to account for Jonny Bairstow and Woakes, with the former a juggled effort after the ball was cracked back at the left-armer.

The Ashes: England all out in Adelaide as Australia takes control