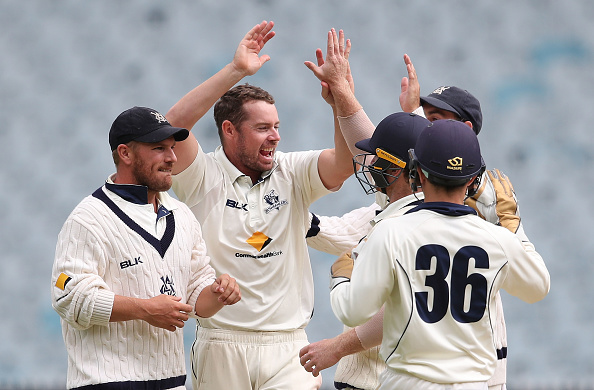 Bowler Jon Holland is congratulated by teammates after dismissing Ashton Agar at the MCG on Sunday. Photo: Getty

Victoria skipper Aaron Finch praised the even contribution of his bowlers after the Bushrangers dismissed Western Australia for 243 on day one of their Sheffield Shield clash.

The Warriors won the toss and elected to bat on Sunday morning but were quickly in trouble at 2-8.

They improved to 5-154 at tea before the Bushrangers brought their innings to a close.

“We’re very happy with how the day went … I think any time you lose the toss and have to bowl on a pretty nice (batting) surface then to bowl a team out is (ideal),” Finch said.

“I thought all our bowlers contributed well, especially with only two genuine quicks in the side.

“The wicket was probably a little bit drier than what we’ve seen here in the last couple of games – that’s why we went with the extra spinner and it worked.

“I don’t think it’s going to spin less as the game goes on, but everyone bowled beautifully today.”

Former Test quick Peter Siddle was rested for the match and leg-spinner Fawad Ahmed earned a recall, finishing with figures of 3-58 from 19.5 overs.

In-form left-arm spinner Jon Holland was also important with 3-60 from 22 overs, while Chris Tremain (2-35 from 15 overs) and Scott Boland (2-49 from 17 overs) chipped in with two wickets apiece.

Opener Will Bosisto top scored for the visitors with 57 but was caught by Cameron White off the bowling of Ahmed shortly before tea.

The Warriors got away to a poor start with Jonathan Wells, caught brilliantly by a diving Finch at third slip off the bowling of Tremain, and Hilton Cartwright dismissed without scoring.

Mitch Marsh helped steady the ship with a 65-run partnership with Bosisto but departed on 43 when bowled by Ahmed.

Keeper Josh Inglis marshalled a rearguard action with a determined 46 before he was trapped in front by Tremain.