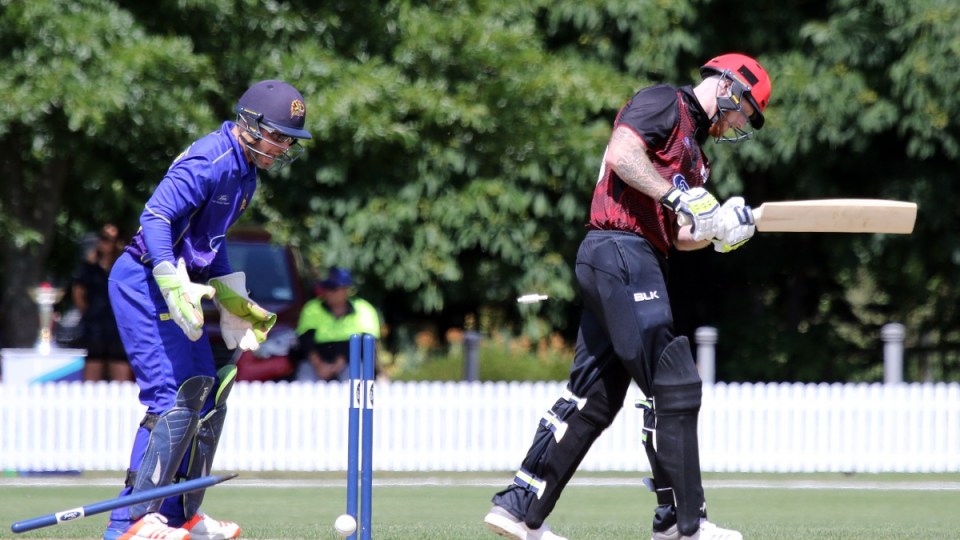 Stokes could only manage two runs before being bowled in Rangiora. Photo: AAP

England all-rounder Ben Stokes scored just two runs and went wicketless in his return to cricket, as the sporting world waits to see if he will play the Ashes.

While his English teammates were beginning day two of the second Ashes Test at Adelaide Oval, Stokes failed to make an impression for Canterbury, as it was beaten by Otago in New Zealand’s Ford Trophy domestic one-day series.

Batting at No.4, Stokes faced just seven balls before being bowled by Otago spinner Anaru Kitchen, after he edged the ball onto the stumps.

He then failed to take a wicket in his nine overs, which cost 49 runs, including being hit for a six by lower order batsman Jacob Duffy.

The moment Ben Stokes is bowled out for two runs by Anaru Kitchen https://t.co/r6TogsKHaU pic.twitter.com/tLVJ5wmFqd

Christchurch-born Stokes has not played for England since an incident in Bristol on September 25 which left a man with a fractured eye socket. He was involved in a street brawl while celebrating an English win over the West Indies.

The England and Wales Cricket Board placed him under suspension but the ban applies only to England matches and it has raised no objection to Stokes playing in New Zealand.

The 26-year-old signed a contract with the Canterbury earlier in the week, further fuelling speculation he could return in the Ashes.

Stokes is yet to break his silence regarding the brawl outside the Bristol nightclub. The cricketer will be gagged throughout his stint with Canterbury, after a request from his legal team.

He did give a brief TV interview before the match in which he said he hoped to “contribute to Canterbury winning”.

“It was the first time I have met quite a few of [my new teammates] today. But it was nice to know a few faces – a few of the young guys came over to Durham as part of the exchange program,” Stokes said.

“It was nice, because it can be hard coming to a new team.”

UK police recently finalised an investigation into the incident and prosecutors must decide whether to charge England’s vice-captain.

Police have passed their file to the Crown Prosecution Service for advice on whether to charge Stokes. The all-rounder’s prospects of joining England mid-series in the five-Test Ashes campaign may hinge on that decision.

The England and Wales Cricket Board reiterated on Thursday it would not finalise Stokes’ punishment, nor let the vice-captain play internationals, until a decision is made on charges.

There is speculation Stokes could be called up to play for England for the third Ashes Test in Perth in December if he is not charged.

Ben Stokes won’t be scaring Australia with this Kiwi performance