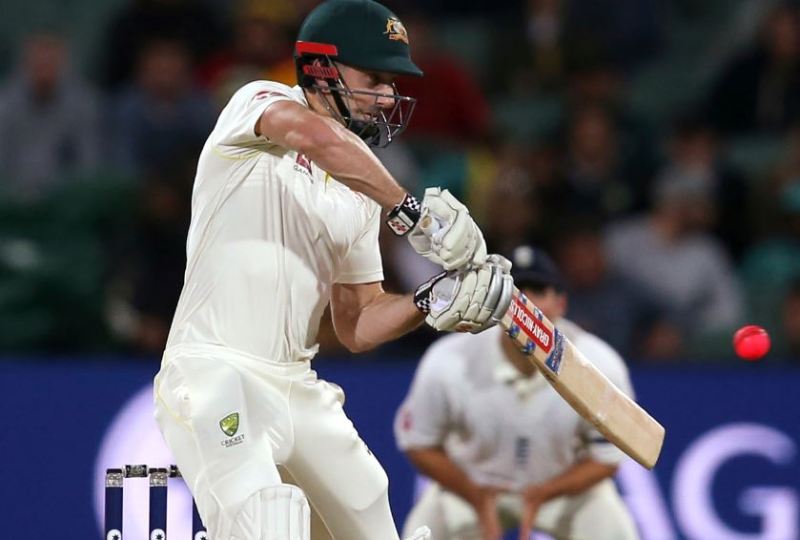 Shaun Marsh's hopes were dashed by a buttock abscess, leaving selectors with no choice but to give him the bum's rush. Photo: AAP

Shaun Marsh posted a resolute century in the day-night Ashes Test at Adelaide Oval as Australia surged into a position of dominance after two days.

Asked to bat first at Adelaide Oval, Australia embarrassed and infuriated England’s attack by compiling 8-442 declared in an innings that spanned 149 overs.

The visitors survived 9.1 overs to be 1-29 when heavy rain ended Sunday’s play.

Earlier, Marsh emotionally celebrated his fifth Test ton after answering critics with arguably his career highlight, a composed 126 not out.

“There were a few emotions there. Probably when I got to 90 I started to get a little bit nervous,” Marsh told reporters.

“I’m extremely happy to get a hundred for my country. It was great fun out there … I am really relaxed at the moment.

“It was hard work this morning, hopefully it can be hard work (for England’s batsmen) tomorrow morning.”

The 34-year-old’s look of delight upon pulling Chris Woakes for a boundary to reach three figures represented the antithesis of his dismay during Australia’s tour of England in 2015.

Selectors waited until the series-deciding fourth Test at Trent Bridge to pick the left-hander, who had impressed in the nets and during tour games.

Their last-minute verdict was Marsh should play instead of his brother in an effort to shore up Australia’s batting depth.

It didn’t go to plan. The much-maligned veteran contributed a fourth-ball duck amid unmitigated carnage.

Marsh was dropped after what could easily have been his only Ashes Test. But he recently earned a chance to deliver on the sport’s grandest stage and has now exacted sweet revenge on Broad and England.

It slipped to 5-209 when Broad trapped Peter Handscomb lbw with the third delivery of the day then screamed in the Victorian’s face in a send-off that could be punished by the match referee.

But Marsh, who started his knock at 8.47pm on Saturday night and spent twice as long at the crease as any other batsman in the match, remained a picture of patience.

Marsh, barring an lbw dismissal on 29 that prompted a successful review and a chance on 102 that Alastair Cook and James Vince made a meal of, batted with great composure to see off the second new ball then reach three figures with a powerful pull shot that sent the ball fizzing to the rope.

“I probably thought it was pitching outside leg more than going over, so when I saw the ball was pitching in line I thought I could be in trouble,” Marsh said of his referral.

England coach Trevor Bayliss insisted his side could complete a remarkable victory by batting deep into day four.

“They’re confident. It’s a good feeling in the dressing room, they were certainly not disheartened at all,” Bayliss said.

“Shaun showed it’s not impossible to score runs out there, a lot of their batters made starts. It’s up to one or two of our guys to make a big score.”

The Ashes: Shaun Marsh batters England as Australia surges ahead