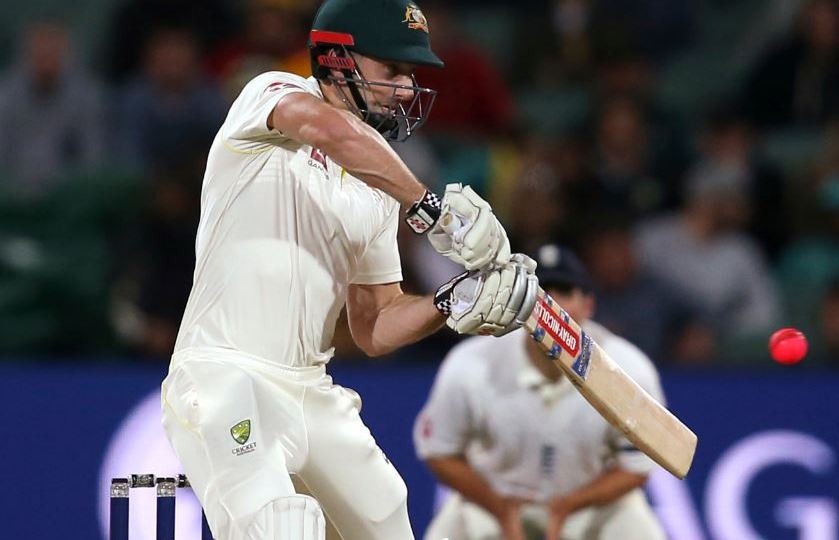 Australia endured a day of sporadic rain, sledging and partnerships that didn’t quite come together to end the first day’s play in the day-night second Test in Adelaide at 4-209 at stumps.

At the close of play, the middle-order duo of Peter Handscomb (36) and Shaun Marsh (20) remain unbeaten, having seen off some quality English bowling under the Adelaide Oval lights.

It was a day that ebbed and flowed, and one that was too frequently interrupted by uncooperative weather.

England captain Joe Root’s decision to bowl, having won the toss, raised eyebrows, even more so as the new Australian opening pair of David Warner and Cameron Bancroft looked disturbingly comfortable against the new ball.

But the great anticipation that met the first session of the Test was quickly extinguished by persistent rain that took players off the field twice, and eventually brought about an early tea.

That break did England wonders, as the game was brought to life by the run out of Bancroft almost immediately after the second session begun.

Warner had as much of a role in the dismissal as fielder Chris Woakes, as Bancroft was told to come and then retreat by his team-mate, only to see his stumps thrown down by the unerringly accurate Woakes.

Joined by Usman Khawaja, Warner settled and took the attack back to England before his promising innings was cut short at 47 by a rising Woakes delivery that caught the edge through to Jonny Bairstow behind the stumps.

Buoyed by the breakthrough, Australian captain Steve Smith’s arrival sparked a revived aggression in England — plus an avalanche of sledging which the Aussie skipper returned in kind.

It wasn’t quite the raw verbal stink many predicted, but Smith’s appearance created a distinct whiff of discontent among his English opponents on Saturday.

Paceman Stuart Broad led an English chorus in what most commentators reckoned was a premeditated tactic.

“England have decided it’s going to be a full-on verbal attack against the Australian captain,” ex-Australian wicketkeeper Adam Gilchrist said.

“They welcomed Steve Smith with a barrage of chat, particularly Stuart Broad, just trying to take the Australian captain out of his bubble,” Vaughan said.

At one point, when Smith and Broad exchanged words at the end of an over, umpire Aleem Dar tried to broker some peace. Those efforts were to no avail as Smith continued his free and frank observations with the Pom paceman.

Both Gilchrist and ex-England skipper Ian Botham cautioned the tourists about poking the bear, noting the Australian skipper gains strength and aggression by verbal broadsides.

“It makes him switch on even more,” said Gilchrist, whose appraisal was seconded by Botham’s sage observation.

“There’s no point in wasting your breath and stamina – certain players you don’t want to (motivate) … leave them be,” the former English skipper noted.

Smith’s wicket fell soon after, caught when Craig Overton, in his Test debut, somehow managed to find the slightest gap between Smith’s bat and pad, taking a little of each en route to the middle stump.

As first Test wickets go, claiming the the imperious Australian captain’s scalp for 40 was the best Overton could have hoped for.

Usman Khawaja was certainly motivated to silence his critics, which he did in a brief but entertaining battle with England offspinner Moeen Ali.

Under pressure over his poor record against spin bowling, Khawaja posted a defiant 53 on day one of the pink-ball Ashes Test.

His knock came to an end when he edged to Jimmy Anderson in the first over after Saturday evening’s dinner break.

It was a relatively short-lived duel between Khawaja and Moeen, who had bowled eight overs for figures of 0-21.

But in the mental battle between the duo, Khawaja came out on top, hitting Moeen for three boundaries including a late cut past third man to bring up his 50.

The visitors’ poor fielding did them no favours, with Khawaja dropped by Mark Stoneman in the deep on 44.

Ashes: Australia ends a day of sledging and showers at 4-209