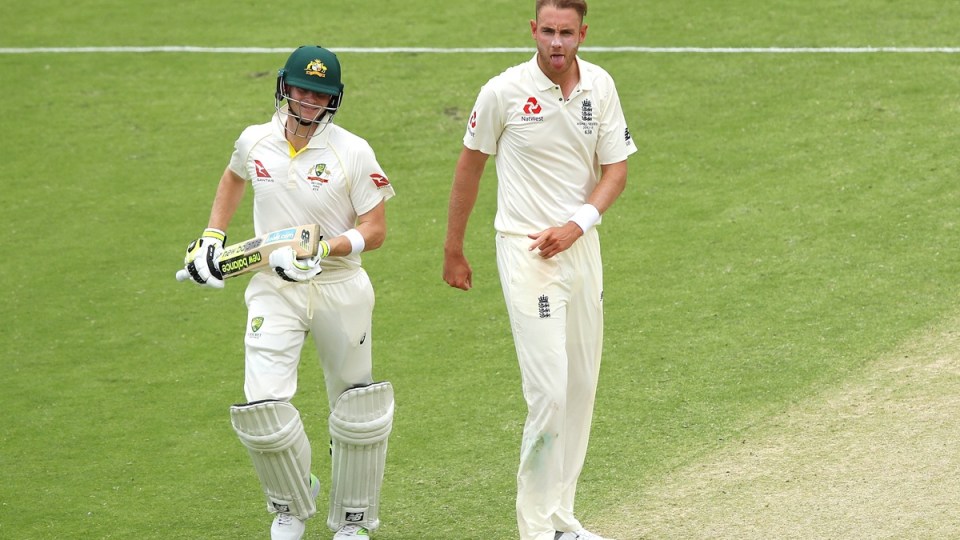 If you cannot bowl them out, bore them out.

That is England’s plan against Australia this summer – so much so it was dubbed the ‘Bore-Me-Army’ by the Brisbane press last week.

It doesn’t bother the players, though, with England villain Stuart Broad stating Australia should expect more of the same through this Ashes series.

“We know the Australians like to score quickly,” Broad said last week.

“If we can restrict them from scoring a lot of boundaries then we will have periods of taking wickets.”

It is easy to forget, given Australia’s 10-wicket win in the first Test at the Gabba, but those dour tactics worked very well during the first two days of the series opener.

England had Australia on the ropes at 4-76, in response to its first innings of 302, only for a Steve Smith-led rescue mission to save the hosts.

Former Australia batsman Simon Katich hailed England’s tactics with the ball and said the onus is now on Smith’s men to adjust.

“England had some very good plans to the Australian batting line-up and part of Test cricket is to absorb those plans and make them not pay off for the bowling teams,” Katich told The New Daily.

“It is about adapting your game to the situation.

“Batsmen have to be prepared to wear England down, get in partnerships, rotate the strike and be patient.

“Most Australian batsmen have now had a sighter on what they are going to expect in Adelaide and they should be better prepared.”

Katich urged the rest of the Australian batsmen to study Smith’s patient innings in detail and believes many players will need to curb their attacking instincts against the well thought-out plans.

“There will be some guys that can take the game on and put the pressure back on [captain] Joe Root and the English bowlers, but they have to decide the right time,” he said.

“I think they [Australian batsmen] would have learnt from this Test that the England attack is very experienced and successful for a reason and they will have to show that respect in Adelaide where the conditions could be helpful for them.

Steve Smith showed there are times to hang in there, find the right time to attack and combat those plans and that is exactly they should play in Adelaide.”

The Australian captain admitted after his century that while the tactics employed by England were pessimistic, some of his teammates fell into the trap.

“It felt like they were waiting for us to make a mistake, unfortunately [our] top four made those mistakes,” Smith said.

“It might be a series where boundaries might be hard to come by but if you bat for long enough and rotate the strike you will get runs when the bowlers get tired.”

David Warner and Cameron Bancroft might have made England’s bowlers look second-rate in the second innings in Brisbane but Katich feels life will be much tougher for the pair in Adelaide.

“[They need to] have a think about how they have been attacked and come up with a plan technically as well as tactically,” he said.

“That is the beauty of Test cricket. You have to be mentally strong and be ready for anything that the opposition is going to throw at you.”

The Ashes: The tactic Australia needs to master this summer