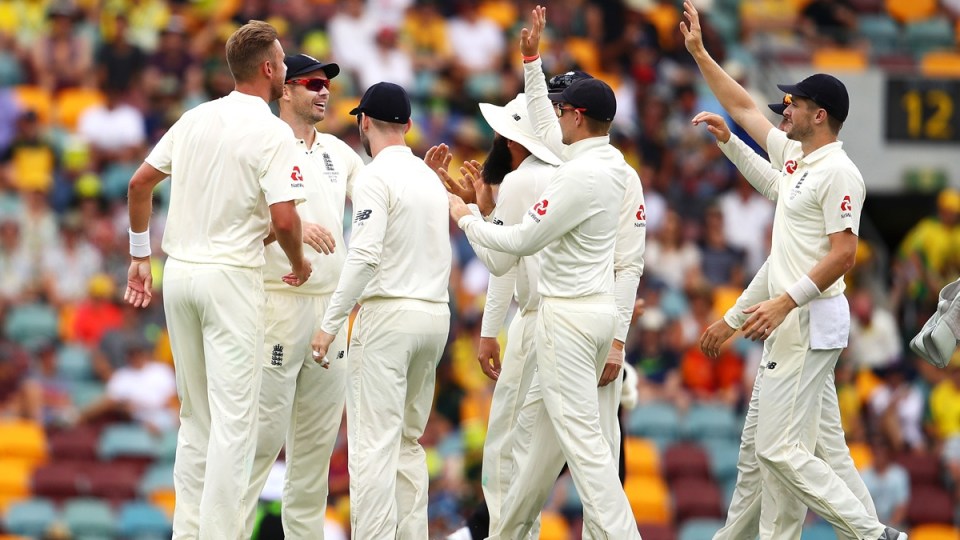 England was on top early in the first Ashes Test. Photo: Getty

The positives aren’t easy to find for England.

It lost the Ashes opener by 10 wickets, a match in which England’s back-up bowlers looked pedestrian, its tail looked suspect and the players faltered under pressure.

But there is some light at the end of the tunnel for the tourists. And it comes in the form of the Adelaide Oval floodlights.

The second Test – which begins on Saturday – will be the first day-night Ashes clash, something that will give Joe Root’s men hope.

Ever since day-night Test cricket was introduced in Adelaide, batting has proved difficult and bowlers in the mould of England seamers Jimmy Anderson and Stuart Broad have caused havoc.

The pink ball has misbehaved alarmingly during the twilight hours and into the night session and ex-England batsman Mark Butcher said this presents a golden opportunity for England to level the five-Test series.

“It is as close to English conditions as they are going to get at the Adelaide Oval,” he told The New Daily.

“A few years ago it was always the batsmen who enjoyed playing at the Adelaide Oval but now that has all changed.

“It is the bowlers who now look forward to the Adelaide Test more than batsmen.

“In recent Tests there, we have seen a bit of grass [on the pitch] and the pink ball can swing under lights so that definitely suits England.

“Traditionally, England have played their best cricket when there has been lateral movement and the recent history indicates Adelaide Oval will offer that.”

The English bowlers will be licking their lips at the prospect of bowling on a grassy pitch – designed to prevent the pink ball losing its colour.

But while Butcher said Anderson and Broad would appreciate the conditions, he expects England’s second-string seamers to really come into the game.

“Anderson and Broad have proved their class on any surface but more so if the ball does move, it brings the likes of Chris Woakes and Jake Ball into the game a bit more,” he said.

“If you look at the first innings in Brisbane – Woakes and Ball found it tough going once the ball stopped moving.

“In Adelaide it should move for a longer period of time … that should help them.”

England will also be boosted by the fact that, in recent years, the Australian top order has struggled against the moving ball.

“It was on show how they played against the moving ball in last Ashes series,” he said.

Who bats and when they bat will play a significant role in deciding the outcome of the Test and Butcher was quick to point out that the Australian bowlers could also benefit greatly from bowling at night and on that surface.

“The England batsmen might find it equally hard against [Mitchell] Starc, [Josh] Hazelwood and [Pat] Cummins,” he said.

“All of them are capable of moving the ball through the air and off the seam.

“If Australia get to bowl in the twilight hours or during a time when the ball swings then England must overcome the Australian attack.”

Butcher, who said England must play Nathan Lyon more aggressively in the second Test, was in no doubt as to the importance of the series.

A loss in Adelaide will leave England with the daunting task of trying to win the Ashes from 2-0 down – a feat no England team has ever achieved.

“History says England will lose at Perth, so it is absolutely vital they are not two down heading over to the WACA.”

The Ashes: Why we can’t write off England’s hopes … yet