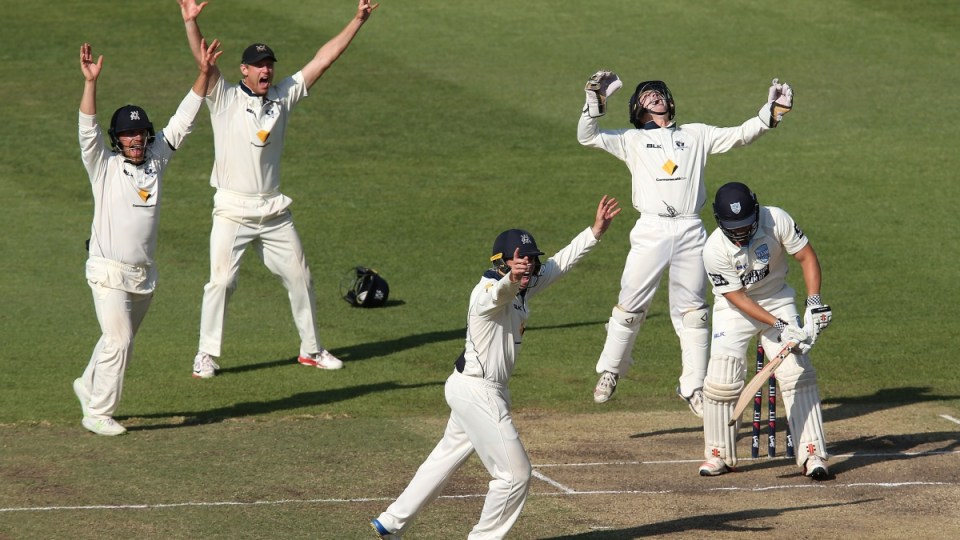 Victorian players celebrate the dismissal of Stephen O'Keefe of NSW off the bowling of Glenn Maxwell of Victoria during day four of the Sheffield Shield match between New South Wales and Victoria. Photo: Getty

Victoria is anchored on the bottom of the Sheffield Shield ladder after NSW held on for a gripping draw at North Sydney Oval.

Former Test opener Ed Cowan, who came in at at No.9, was unbeaten on 40, and batted out the last 20 overs with Trent Copeland, who soaked up 62 balls in scoring five.

Victoria picked up four points and NSW 1.73, with the result keeping the Blues top.

It was a frustrating day for winless defending champions Victoria, who dropped some catches in a tense and sometimes bizarre day.

In one spell of 48.4 overs either side of tea, the Blues scored only in boundaries, hitting 26 fours before Steve O’Keefe broke the streak with a two.

At one stage NSW played out 13 straight maidens despite there being huge gaps in the field.

Kurtis Patterson topscored with 61, with all but his first run coming through boundaries, though he could have finished with many more, but opted not to run when playing the ball into gaps.

Victoria got through an extraordinary 22 overs in one hour and captain Aaron Finch added to the intrigue with some unconventional field settings.

On occasions he had every fielder within 15 metres of the bat and on another he didn’t have anyone fielding in front of the wicket on the offside.

Patterson and nightwatchman Sean Abbott (47 off 175 balls) held up the Bushrangers for 31 overs in a fourth wicket stand of 74.

Once Abbott padded up and was out lbw to Finch, the Bushrangers worked their way through the middle order.

NSW captain Moises Henriqiues was out for a 24-ball duck and Peter Nevill (8) perished in the last over before tea and Patterson was dismissed in the first over of the final session.

But Cowan and O’Keefe stalled the Bushrangers victory push for 13 overs and Copeland also denied them down the stretch.