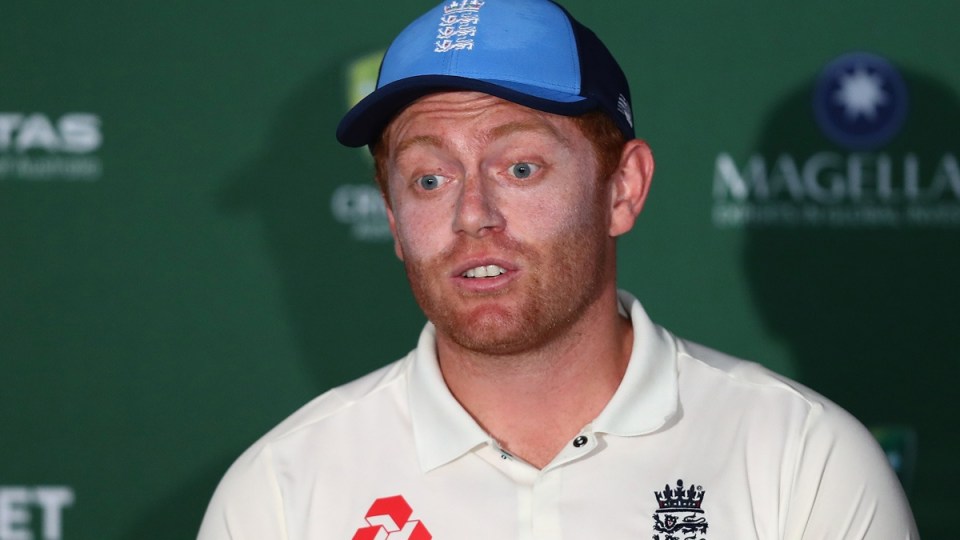 Jonny Bairstow fronted the press to try and quell the speculation. Photo: Getty

England wicketkeeper Jonny Bairstow and Australia batsman Cameron Bancroft have spoken about the headbutt that dominated cricket headlines as the first Ashes Test drew to a close.

Bancroft was a key figure on Monday as Australia took a 1-0 lead in the five-Test series, hitting an unbeaten 82 on debut as Steve Smith’s side wrapped up a convincing 10-wicket win in Brisbane.

But Bairstow’s “really weird” greeting to Bancroft in a West Australian pub earlier this month remained a talking point in the aftermath as England captain Joe Root said “a mountain has been made out of a molehill” in the post-match presentation.

In an attempt to set the record straight, Bairstow gave a short statement to reporters on Monday saying the incident had “been blown out of all proportion”.

“There was no intent or malice about anything during the evening,” he said.

“And as you saw out there today, there is no animosity between myself or Cameron or any of the other Australian players.”

The incident came to light when pitch microphones picked up David Warner sledging Jimmy Anderson about the incident.

In audio released by Triple M on Monday, Warner told Anderson that “you shouldn’t headbutt our mates”.

Those comments triggered a Fox Sports News report which said the England and Wales Cricket Board [ECB] were investigating Bairstow’s conduct.

But England coach Trevor Bayliss said that no further action would be taken – despite admitting to the ABC that the incident “doesn’t reflect well on the image of the team, that’s for sure.”

While Bairstow’s explanation of events was short and still left several details unclear, Bancroft, fresh off an excellent innings, spilled the beans to the Australian press.

“I remember it very clearly … it was very friendly, mingling the whole night,” Bancroft said, explaining how he and his Western Australia team-mates ran into some England cricketers at a Perth bar.

“I got into a very amicable conversation with Jonny and he just greeted me with just a headbutt kind of thing.

“It was so random and I certainly didn’t expect it coming. A handshake or a hug or something like that would have been something I would have probably expected more than a headbutt.”

Bancroft added that “there was certainly no malice in his action and we continued on having a very good conversation for the rest of the evening”.

“I just took it as ‘I don’t know Jonny Bairstow, but he says hello to people very differently to most others’,” he said.

“We got along for the rest of the night quite well … I let it go and it was fine.”

Bancroft also said that it “was a good hit”.

England legend Sir Ian Botham slammed the “pathetic” Australian media for the reports of the incident.

“I find it quite pathetic to be honest. No one cared then, no one cares now. Let’s just move on, for goodness sake,” Botham told Sky Sports News.

“Just get on with it – be happy you’re winning the Test.

“I think it’s a bit rich coming from Australia about culture … I really can’t be bothered with someone from four weeks ago that no one cares about.”

The Ashes: The truth behind the headbutt headlines