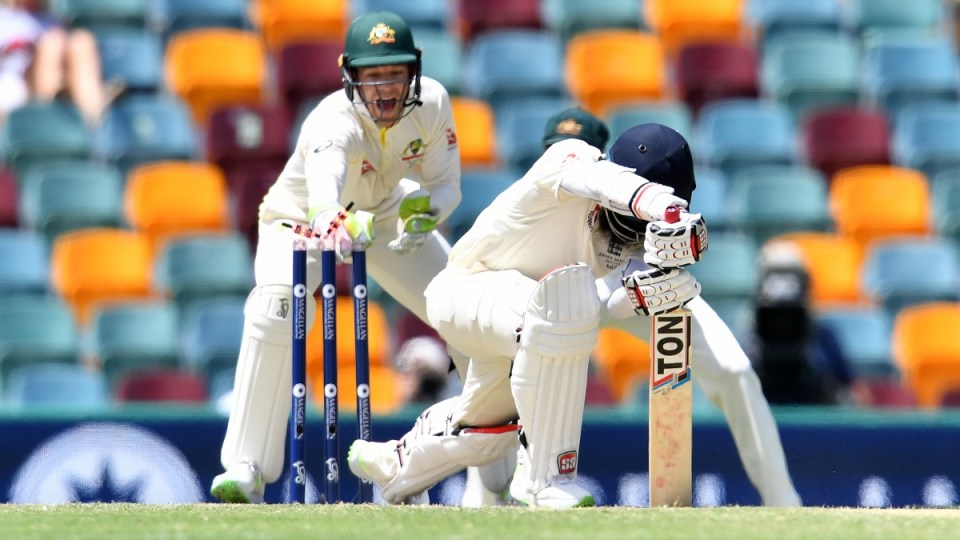 With Australia on the verge of winning the first Test in Brisbane, it was a contentious stumping decision that dominated discussion on day four.

At stumps Australia was 0-114, with David Warner not out on 60 and Cameron Bancroft unbeaten on 51.

Earlier, England was dismissed for 195, leaving Australia with a target of 170 to take a 1-0 lead in the series.

Third umpire Chris Gaffaney gave Moeen out for 40 after quick work by Paine despite replays indicating the allrounder’s toenail may have snuck behind the crease.

While the likes of former players Michael Clarke and Shane Warne butted heads over the decision, social media erupted over the crease with still shots of Moeen’s dismissal indicating the line was inconsistent.

Out or not out?

Watch the dismissal that has the cricket world talking: https://t.co/4cEypIet0m #Ashes pic.twitter.com/0P6iVEQRW3

Some complained the line was not straight or thicker where the batsman stood.

However, the seemingly irregular crease line appeared to be an optical illusion thanks to a huge divot at that end created by Australian quick Mitchell Starc.

“If I was bowling I would want it to be out. It depends on what angle you look at it from but you have to respect the umpire’s call,” Moeen said after the day’s play.

“I thought I was alright personally. The replay did look very tight.”

Asked about the crease line’s perceived varying thickness, Moeen said: “It’s what happens in cricket. I was more disappointed with the time when I got out. I was over it straight away.”

Not surprisingly recalled keeper Paine was convinced he had snatched just his second Test stumping and first since 2010.

“Definitely. We could see paint behind his foot. It was hard to tell – I haven’t seen the replays up close but certainly out there live, we knew we had him,” he told ABC Grandstand.

Former England captain Michael Vaughan said the right call had been made but still managed to back the conspiracy theories.

“It was fair, it was a very tight one but we had it out [in the commentary box],” he said.

“We also reckon it is the thickest crease line that we have ever seen.

“I think it was an absolute fair decision that he was given.”

Moeen’s dismissal was a hammer blow for England which was bowled out for 195, setting Australia a victory target of 170.

Former Australian captain Clarke believed the benefit of the doubt should have gone with Moeen who was stumped for the first time in his Test career.

“I disagree with that decision. I thought he had something just behind the line and I thought the benefit of the doubt had to go to the batsmen,” he said.

“Paine was the only one that appealed.

“I don’t think you can clearly say there is something not behind the line.”

“There is not enough reason to do anything other than give that out,” he said.

“I don’t think he had anything behind the line whatsoever.”

Starc said the Australians enjoyed a “great day” as they look to take a 1-0 series lead.

“There’s still a long way to go in the series but … the first Test is huge,” he said.

“If we can knock off these 56 runs tomorrow it puts us in a very strong position heading to Adelaide. England have to chase us from now on.”

Moeen, whose wounded spinning finger is among England’s many concerns ahead of the day-night Test in Adelaide, admitted defeat.

“The first three days we were right in the game then today didn’t quite go to plan. That’s cost us this Test match,” he said.

“Today we let ourselves down, with the bat especially.

“We obviously won’t win the game but getting wickets can sort of put a dent in Australia for the next game.”