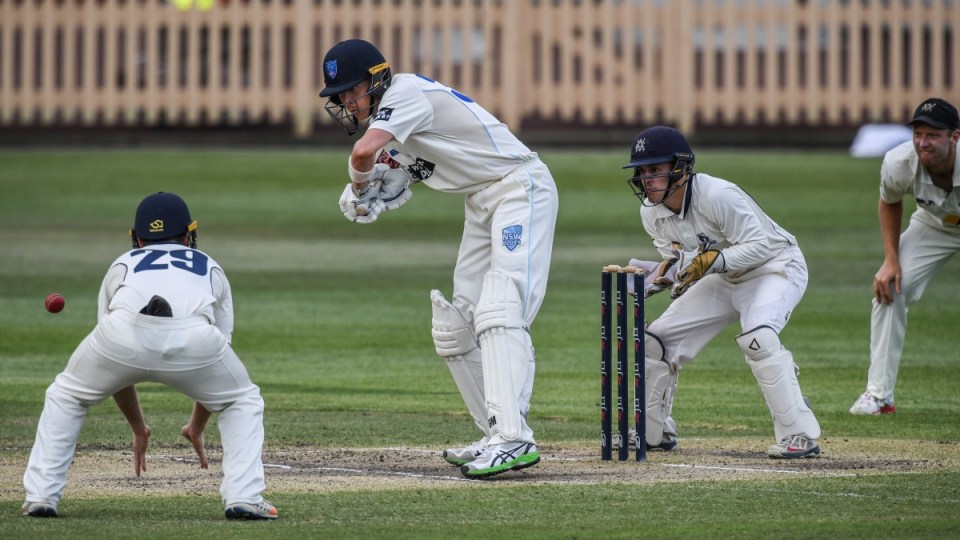 Nick Larkin of NSW on the defensive during day three of the Sheffield Shield match between NSW and Victoria. Photo: AAP

Spinner Jon Holland has picked up where he left off at the end of the last Sheffield Shield season, to give Victoria a strong chance of outright victory against NSW in Sydney.

Set 468 for victory, the Blues were 2-46 at stumps on day three on Sunday, 422 runs from an improbable victory.

Left-arm spinner Holland made the initial breakthrough, bowling Daniel Hughes with a fine delivery for 21 after the opener’s first five scoring strokes were boundaries.

Holland, in his first interstate appearance since last season’s Sheffield Shield final, earlier took 5-67 off 33 overs, to help the Bushrangers to a 319-run first innings lead.

“Today it was my day,” said Holland, who completed his five-wicket first innings haul after being handed the second new ball.

“I had surgery on my knee just two days before the first JLT one day (competition) so it’s been pretty frustrating and disappointing not to play much cricket for Victoria this summer, but now it’s good to be back and hopefully we can have a win,” he added.

The knee is feeling pretty good. I’ve done a lot of bowling in the nets leading up to this game to be right to play.”

“I’m comfortable with where it’s at, so hopefully tomorrow it feels good and I can get a few more overs.”

The last time two-Test tweaker Holland played, he was named player of the Sheffield Shield final back in March after claiming eight wickets, including a career-best 7-82 against Tasmania in the first innings.

The Bushrangers batted for just 21 overs in their second innings, with captain Aaron Finch declaring at 3-148.

Opener Marcus Harris stared with a run a ball 62 and Finch blasted 43 in a spectacular 28-ball cameo.

“They are a quality bowling attack and Holland and the quicks did really well to restrict us to 243,” O’Keefe said.

“They built up a lot of pressure and I think there was some good bowling combined with a couple of poor shots.

“We were a couple of hundred runs short, on the first innings, it certainly wasn’t a 243 wicket.”

Cricket: Vics on top of NSW in Shield clash