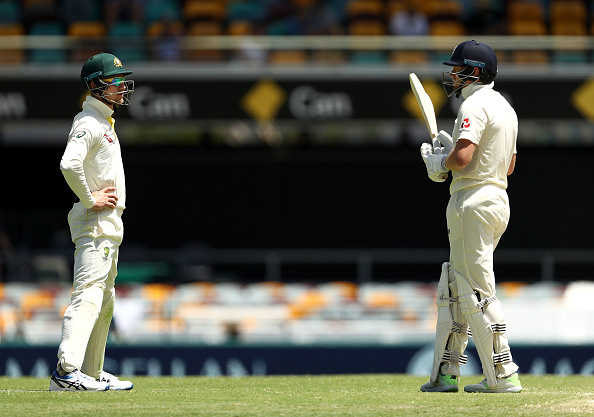 Cameron Bancroft of Australia has words with Jonny Bairstow of England during day four of the first Test at the Gabba. Photo: Getty

England’s cricket board is investigating the alleged incident, which reportedly occurred in a Perth bar earlier this month, shortly after England arrived in Australia to play a warm-up match at the WACA ground.

Bancroft didn’t play in that game but was at home in Perth prior to flying out for a Sheffield Shield match in Sydney.

It’s understood the England and Wales Cricket Board (ECB) is currently trying to find out more facts about the alcohol-fuelled incident that entered the public domain on Sunday, when it was used as sledging fodder on day four of the Ashes opener.

There are differing versions of what unfolded. Fox Sports Australia is reporting Bairstow headbutted Bancroft, while other versions suggest it was more low key and a case of tomfoolery gone awry.

“Basically, what is being alleged is that Johnny Bairstow has connected his head with the side of Cam Bancroft’s head,” Fox Sports reporter Neroli Meadows said.

“This is before Cam Bancroft was selected for the Test team,” Meadows added.

“He was a WA player and it is understood that the WA players were out having a few drinks at the OBH (Ocean Beach Hotel).

“It then moved to the Avenue where they ran into a few of the England boys. This is where the alleged incident is said to have occurred, at the Avenue in Perth.”

AAP understands Bancroft has discussed the matter with team management, who are satisfied he did no wrong in the scrap.

The ECB released a statement late on Sunday night: “At close of play in Brisbane today, we were made aware of allegations of an incident in Perth four weeks ago.

“There has been no report of any incident from the venue, security or police and there was no injury reported.

“Following an initial conversation with Jonny Bairstow tonight we understand the context and will follow up with England players and management after the Brisbane Test.”

Even if the incident is minor it is a bad look for the tourists, who are currently missing Ben Stokes because of the allrounder’s brawl outside a Bristol nightclub that left another man hospitalised with facial injuries.

England coach Trevor Bayliss flagged the prospect of an Ashes curfew following the Stokes fracas but decided to give his players free rein, trusting them to enjoy themselves in a sensible manner.

“There are no set curfews, they are just sensible rulings,” Bayliss said earlier this month.

“Not drinking between matches is just sensible. We certainly don’t want to keep players in their rooms because it is a long tour.

“You have to get out and experience what the country you’re touring has to offer.

“It’s about picking the right time to have a couple of drinks, but knowing to stay away from it if you’re preparing for a match.”

The alleged clash between Bairstow and Bancroft comes four years after a bar-room scrap between David Warner and Joe Root preceded an Ashes series in England.

Warner was effectively suspended for two Tests after he clipped Root’s chin in a nightclub.

Australia’s vice-captain claimed he was angered by Root’s impersonation of Hashim Amla.

CA warned Warner at the time he was on his last chance.