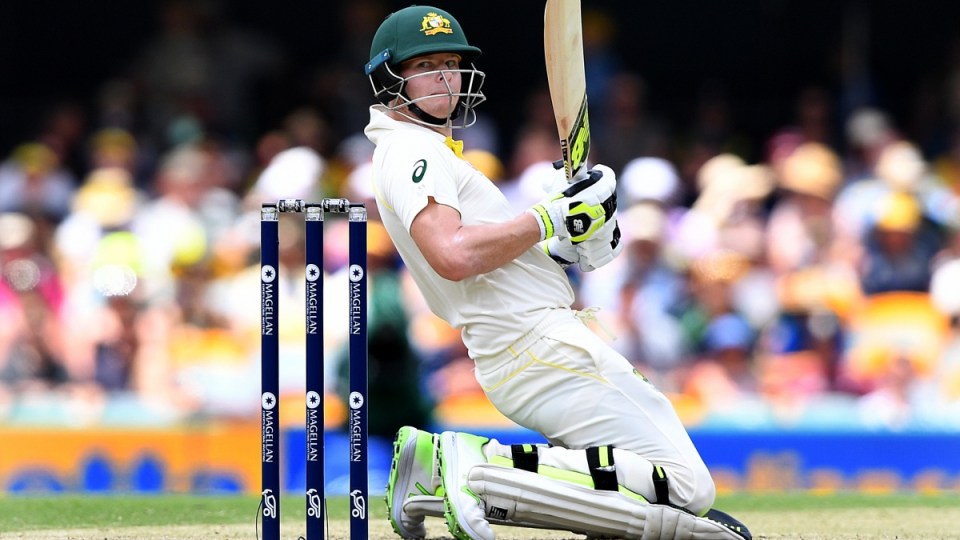 Smith spent a patient 44 minutes in the 90s before scoring his 6th test century against England. Photo: AAP

Australian captain Steve Smith has notched a vital test century for Australia on a tense third day of the Ashes opener at the Gabba, producing a savvy and seasoned marathon innings that saw him still at the crease when the home team was bowled out for 328.

Smith ended his innings on 141 off 326 balls, concluding a knock that began with a sweetly timed cover drive off Stuart Broad’s bowling to bring up his 6th century against England, he celebrated with a passionate punch to his heart and a shout of ‘come on’ to the crowd.

Smith brought up his 21st test ton and the first of the series as Australia was at 7-264 midway through the second session, closing in fast on England’s first-innings total of 302 in a clash where the momentum has swung numerous times.

And that wasn’t the end of Smith’s heroics.

In an action-packed final 60 minuites and with England batting, Smith caught  James Vince off a Josh Hazelwood scorcher, adding the visitor’s scalp to that of opener Alastair Cook, who was caught for just seven runs by Mitchell Starck off another Hazelwood fire ball.

At stumps England was in a world of trouble at 2-33.

But it was Smith’s steady and determined turn at bat that cricket fans will remember.

It took him 261 balls and nearly seven excruciating hours – 415 minutes – to reach triple figures, the slowest century by an Australian batsman since Simon Katich in 2010, but a true captain’s knock at a time when his country needed it the most.

The Ashes series was already looming as the biggest challenge of his captaincy but the circumstances on Saturday piled even more pressure on Smith’s shoulders.

The first session of play on Saturday was being billed as a battle between arguably the two best batsmen in the world, Smith and his English counterpart Joe Root.

Root missed out on a big score in England’s first innings but fittingly when the first Test was in the balance it was he and Smith trading blows in a fascinating tactical tit-for-tat.

England’s fresh-faced captain, desperate to starve Smith of runs and frustrate him into submission early, stacked the leg side with six fielders and asked his quicks to bowl short.

“Root knows if he gets Steve Smith then England are well and truly in a dominant position … you get Steve Smith out [then] you get Australia out,” Michael Clarke said on the Nine Network.

Smith had come to the crease at 2-30 and as wickets continued to tumble around him, he has been the only Australian batsman to have mastered an uncharacteristically slow and awkward Gabba wicket.

“It’s sort of an Allan Border job that Steve Smith has to do. He has got to rebuild this team from the front,” Ian Healy said in commentary for Channel Nine.

“He has to drag this team with him. They haven’t responded that well over the last couple of years.

“It’s been [David] Warner and Smith and not a lot in between.”

Smith forged a 99-run stand for the fifth wicket with Shaun Marsh (51), which dragged Australia back from the brink of potential disaster at 4-76.

Marsh fell not long after reaching his half-century on Saturday morning, falling for a slower Stuart Broad delivery and spooning an easy catch to Jimmy Anderson at mid-off.

However, Smith combined with a plucky Pat Cummins to wag the tail, frustrate the English attack and take away the ascendancy from Joe Root’s side.

“They’ve tried to bore him out. Steve Smith’s shown he’s got more patience than that,” Warne said on Channel Nine.

“He’s prepared to let the ball go, make the bowlers bowl to him.

“By not trying really to get Steve Smith out … getting lb [lbw], bowling straight or full yorkers or short balls, it’s enabled someone like Pat Cummins who’s got some ticker to hang in there with him and score.”