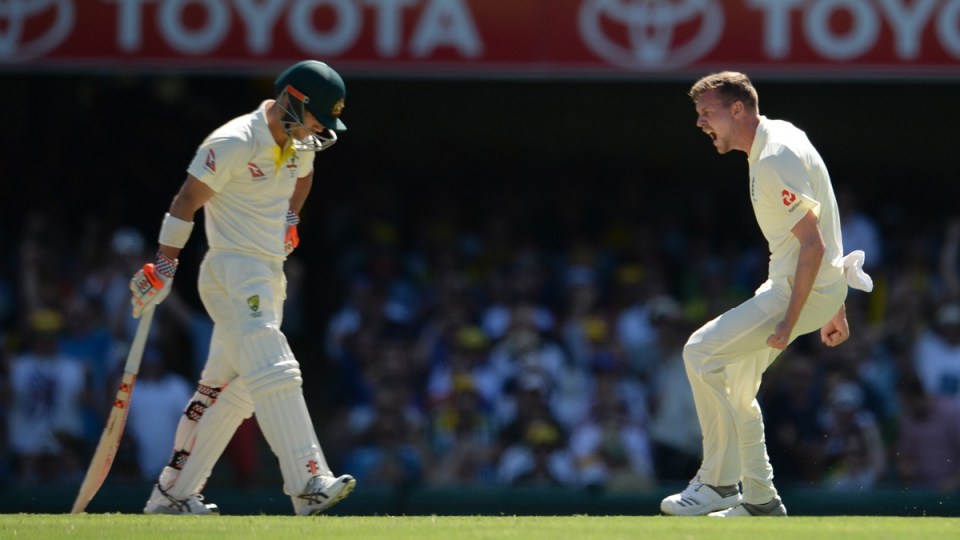 England is on top of the first Ashes Test at the Gabba after Australia lost a clump of early wickets on day two.

After an excellent morning session, in which they took six wickets to bowl England out for 302, Steve Smith’s side faltered to 4-84 at the time of writing (4.10pm AEDT).

Smith (21 not out) remains at the crease, but no batsman has passed 30 in a so-far disappointing performance from the hosts.

Test debutant Cameron Bancroft did not last four overs, edging to wicketkeeper Jonny Bairstow off the bowling of Stuart Broad for five.

And Usman Khawaja’s struggles against spin continued, when Moeen Ali (1-21) trapped him lbw for 11.

David Warner (26) and Smith showed some brief resistance before the former was caught on the pull at short mid-wicket.

And the loss of Peter Handscomb, lbw to Jimmy Anderson for 14, heaped the pressure on Shaun Marsh, who has just returned to the side.

Earlier, England lost its last six wickets for 56 runs to be bowled out in a marathon first session which stretched over two-and-a-half hours, and even included a successful marriage proposal.

Say yes to the #Ashes. He put a 💍 on it at the Gabba's Pool Deck. pic.twitter.com/k0p9pbUd4R

David Malan (56) and Moeen (38) added an additional 50 runs to England’s overnight score, before Mitchell Starc (3-77), who was earlier forced off the field following a collision with Marsh, broke through.

Malan tossed his wicket away, caught by Marsh at square leg, and it triggered a collapse that brought the Gabba to life.

Nathan Lyon (2-78), who bowled so brilliantly on day one without reward, finally opened his series account when he trapped Moeen lbw.

And when Chris Woakes was bowled by a viciously turning off-break, England had lost 3-4.

The quicks mopped up the tail, with Pat Cummins (3-85), Starc and Josh Hazlewood (1-57) each getting a wicket, despite some late runs from Stuart Broad, who was peppered with short deliveries but made his way to 20.

The six-wicket session left the Aussies feeling confident, but England hit back with the ball to claim the ascendancy after the tea break.