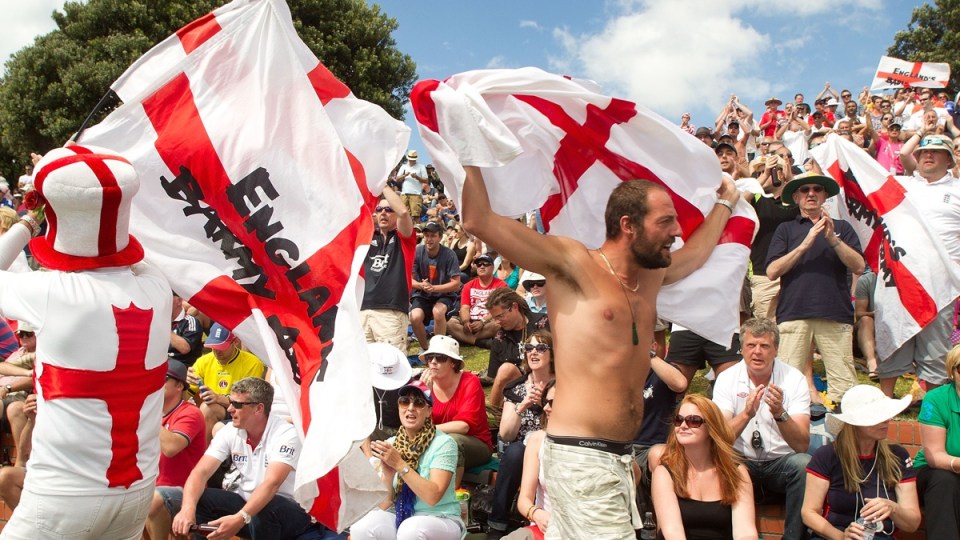 England fans are known for their voice and colour. Photo: Getty

Watching the cricket this summer? Keep hearing singing and chanting more like what you’d hear at a football match?

You don’t need to adjust your television set – that will be a group of passionate and loud cricket fans. But they aren’t Aussies.

Clad in white and red and travelling in their hundreds, a group of English fans will make themselves heard as they travel across Australia this summer.

They are the ‘Barmy Army’ and are now in their 23rd year, after being born out of a low point in English cricket history.

It was during the 1994-95 Ashes series that it all started, as Craig McDermott and Shane Warne ran riot with the ball, and Michael Slater and Mark Waugh piled on the runs.

Australia won 3-1, and the small band of touring English supporters decided to make their own fun instead.

“We were a traveling group, all independent, who’d never met each other before,” Barmy Army co-founder Ian Golden told The New Daily.

“We were picked up by the Aussie press for cheering and singing soccer-style songs, despite losing and being heavily beaten in everything.

“We were losing to Zimbabwe and Australia, and the Aussie media couldn’t believe we were so happy.

“We were chanting, ‘Atherton’s Barmy Army’ after Mike Atherton, the England cricket captain at the time, and the media picked that up and coined it as ‘The Barmy Army’.”

Golden helped print hundreds of T-shirts after the media attention, and, over the years, three other Londoners grew their business to include Barmy Travel, sponsorships and charity work.

The group has become an iconic sporting brand. Their colourful fans and unique sense of banter have enlivened international cricket games around the world.

And then there’s their singing.

“Setting up the Barmy Army was all about having a good time in a friendly atmosphere, but giving a bit of taunting to the Aussies – who we all know can’t handle it very well,” Golden said.

They’ve dished out plenty of football-esque songs featuring the likes of Mitchell Johnson, Shane Warne and Ricky Ponting over the years.

Johnson revealed recently they put him off his game at times.

“What the Barmy Army do really well is they bring an atmosphere,” Johnson wrote in a column for The Telegraph.

“It’s a different kind of atmosphere from the songs that the Australian crowds sing – they [the Barmy Army] are relentless, they go all day long.

“And when you don’t have control, when they start singing songs about you – I was singing those songs in my head, and it’s not good to be thinking negative thoughts.”

The Barmy Army rattled Johnson in the 2011 Ashes series with this infamous number:

Mark Waugh got a song in his honour after the Australian Cricket Board announced he and Shane Warne took a bookmaker’s cash in exchange for pitch and weather information.

And it was so catchy that, decades on, former Australia captain Ricky Ponting recited it word-for-word during a Big Bash television commentary stint recently:

“Mark Waugh is an Aussie, he wears a baggy hat,
When he saw the bookie’s cash, he said I’m having that.
Shared it out with ‘Warnie’, and went and had some beers,
And when the ACB found out, they covered it up for years.”

Singing aside, they’ve also reinvigorated and redefined the concept of what a sports supporters tour is supposed to be.

Australia followed suit with ‘The Fanatics’ in the late 1990s, but the Barmy Army only focuses on cricket (the former follow all Australian sports teams).

Thousands are set to watch England throughout the summer, some making lengthy and costly journeys.

One such man is Ed Miller.

A general sports enthusiast and cricketer, the teacher has taken a year off work to travel and watch the Ashes Down Under. But this is no ordinary trip – it’s purely overland. No planes, just an assortment of trains, buses and cars.

“I knew the Ashes was on, so when you have that amount of time off work, then what a better way for a once in a lifetime bucket list thing and go see all four or five Tests,” Miller told The New Daily.

“I’d backpacked before and was thinking of ways to do it [the travel] differently. I started to put the trip together and realised it was mostly possible [for an overland journey].”

He made his way from The Oval in London, took the train to Belgium, Russia, then bussed his way across Asia.

A cruise ship took him from Bali to Darwin, before he travelled down to Brisbane for this year’s Ashes opener.

Miller isn’t a member of the Barmy Army but will sit with them, as well as join friends and family, while attending the five Tests.

He’s spent around $12,000 and decided to raise money for charity given the uniqueness and length of his journey.

Miller will join an ever-growing group of Barmy Army and English sports fans.

Golden expects to have as many as 10,000 members of the Army present in Melbourne and Sydney, along with a sizeable amount of Australia-based Brits.

English cricket supporters were previously a seen as a dour bunch who sat and watched the game noiselessly.

“Previously you were frowned upon if you said anything during an over, but the Barmy Army changed that,” Golden said.

The Ashes: The story behind England’s ‘Barmy Army’