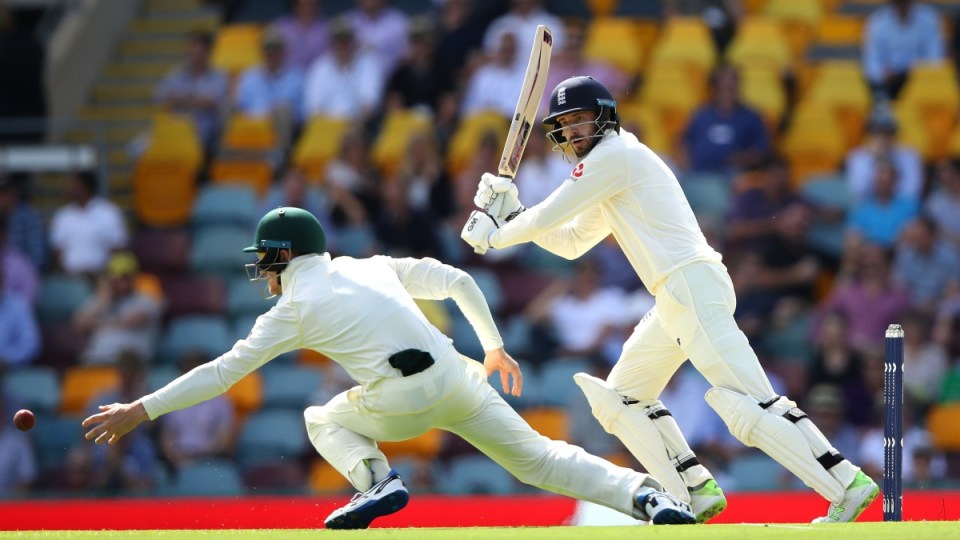 England's James Vince was in fine form in his first test innings against Australia. Photo: Getty

England’s James Vince was the hero of the opening day of the first Test, scoring 83 and later admitting he had “extra incentive” given Australian criticism of his ‘no name’ team in the lead-up to the Ashes series.

Former Australian opener Matthew Hayden had controversially said he had no idea who half the England players were, prompting this end-of-day retort from Vince: “If he didn’t know who we were at the start of the day, he probably does now.”

At stumps England was 4-196, with the match evenly poised.

There are few tougher assignments for a novice batsman than facing Australia on day one at the Gabba, but the 26-year-old Vince looked cool in his 238 minutes at the crease.

It was Vince’s first Test match overseas and just his eighth overall.

Recalled Australian wicketkeeper Tim Paine had the misfortune of being the Australian villain, spilling a chance to dismiss Vince off cult hero Nathan Lyon.

Paine was dubbed “Australia’s best wicketkeeper” by selectors when they justified plucking the 32-year-old from obscurity to play his first Test in seven years for the Ashes opener in Brisbane.

Not so beautiful, Tim

Paine offered the now usual ‘nice’ encouragement to Lyon, “Gorgeous, Garry”, “Beautiful, Garry” and “Oh yeah, Gaz”, but there were only groans audible behind the wicket when Paine spilled a regulation chance off the spinner with Vince on 68 in day one’s middle session.

Captain Steve Smith threw his head up in despair as Paine made a meal of the rare chance following strong pressure from Lyon.

“I am sure he would be very disappointed. He keeps pretty high standards,” Australian quick Pat Cummins said after the day’s play.

“Hearing him speak to ‘Hads’ (fielding coach Brad Haddin) he was in a perfect position it just bounced a bit and didn’t stick, but I thought he was outstanding today.”

Offspinner Lyon finally got his man when he spectacularly ran out Vince for a Test-high 83 with a direct hit early in the final session.

Still, Paine’s glovework behind the stumps has now come under question after the potentially costly miss.

“You don’t look for what might happen, you watch for what is happening and he wasn’t quite ready for what came to him,” ex-Test keeper Ian Healy said of Paine’s clanger.

All eyes were on Paine after he received a surprise call-up as Test keeper despite donning the gloves in only three Sheffield Shield games in the past two years for Tasmania.

Vince had come in at 1-2 after the early loss of Alastair Cook, but  steadied the ship for England with a 125-run partnership alongside opener Mark Stoneman to frustrate the much-vaunted Australian pace attack.

He was eventually run out by a spectacular piece of fielding from Lyon.

One run too many

“In hindsight, I wouldn’t take the run,” Vince said.

“At the start of the day if you’d have offered me 80-odd, I probably would have taken it. I’m trying to look at it that way.”

Vince said the criticism of the England squad made the day’s work all the more satisfying.

“Not just that – there’s a bit of chat around and I’ve had stuff since I got called up after my last effort in Test cricket.

“It gives you a bit more inspiration and fight to go out there and try and prove people wrong.”

Before Brisbane, Vince hadn’t surpassed the half-century mark in his seven Tests, with an average of just 19.

His previous highest score was 42 off 49 balls against Pakistan at Lord’s, while he tallied one and a duck in his last Test in August 2016.

Of the Australian bowlers, Cummins finished with 2-59, Mitchell Starc with 1-45, Josh Hazlewood 0-51 and Lyon was the most economical with 0-40 off 24 overs.

The Ashes: Opening-day Paine for Australia as Vince makes a name for himself