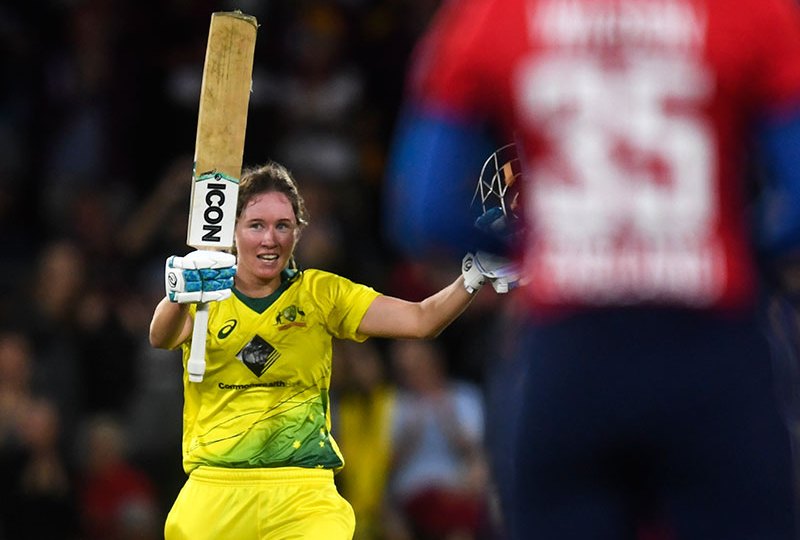 Beth Mooney crunched an unbeaten 117 from 70 balls but it wasn't enough as England won the T20 in Canberra. Photo: AAP

Australian opener Beth Mooney smashed the first century in women’s Twenty20 internationals in her country, but counterpart Danielle Wyatt hit the second as England claimed a stunning victory in the Ashes finale.

England snatched an 8-8 draw in the multi-format series in consolation for the home side retaining the urn last week by chasing down a record 178 with an over to spare for a four-wicket win on Tuesday.

Australia was left to rue four dropped sitters in the field as Wyatt struck 13 fours and two sixes for 100 runs off 57 balls.

With Australia winning the toss and batting, left-handed opener Mooney was scintillating with 19 fours and a six in her 70-ball innings of 117 at Manuka Oval, reaching the rope in each of the first six overs.

The performance bettered her match-winning unbeaten 86 when Australia clinched the Ashes on Friday night in the opening T20 at North Sydney Oval.

Only injured captain Meg Lanning had previously hit an international T20 century for Australia, making 126 against Ireland in 2014 in Bangladesh.

Mooney and Alyssa Healy produced an opening stand of 59 before fast bowler Katherine Brunt removed the dangerous Healy for 19 thanks to a fine diving catch by captain Heather Knight.

Mooney reached her half-century off 38 balls before No.3 Elyse Villani was bowled by spinner Sarah Ecclestone for 16.

Mooney, supported by Ellyse Perry (22), finished the innings superbly with four boundaries in the final over off Anya Shrubsole for the hosts to end on 2-178.

It was a strong bounce back for Australia from a 10-67 batting collapse in losing Sunday’s second match by 40 runs.

England started the chase poorly when opener Tammy Beaumont failed to clear mid-off Ashleigh Gardner off the bowling of spinner Jess Jonassen in the first over.

Sarah Taylor was the next to go when she lofted Jonassen to captain Rachael Haynes at cover to leave England 2-16 at the start of the third over.

The visitors were handed their first reprieve when Wyatt skied spinner Molly Strano, but wicketkeeper Healy was unable to hold an easy catch.

England’s bid for quick runs again came unstuck when Natalie Sciver was removed for seven, run out by a Villani direct hit from mid-off to end the fifth over.

Knight’s dismissal was quickly followed that of Wyatt and Brunt.

But England would not be denied in its effort to take some of the gloss off victorious Australia, whose two one-day and sole T20 victories, and a drawn Test, were enough to retain the trophy.

Author Salman Rushdie stabbed in the neck by masked assailant on stage
Melbourne society icon Lillian Frank dead at 92
Foreign Minister Penny Wong vows to keep working to free Aussie journo Cheng Lei from Chinese jail
Cameron Smith and fellow Aussies in the thick of it at PGA’s Memphis tournament
Taiwan thanks US for maintaining regional security in the face of Beijing’s bullying
Ex-Liberal staffer: Survivors weren’t asked about their ordeals in NSW parliament
The Ashes: Cricket legends on why the ‘Gabbatoir’ challenges England so much
Today's Stories