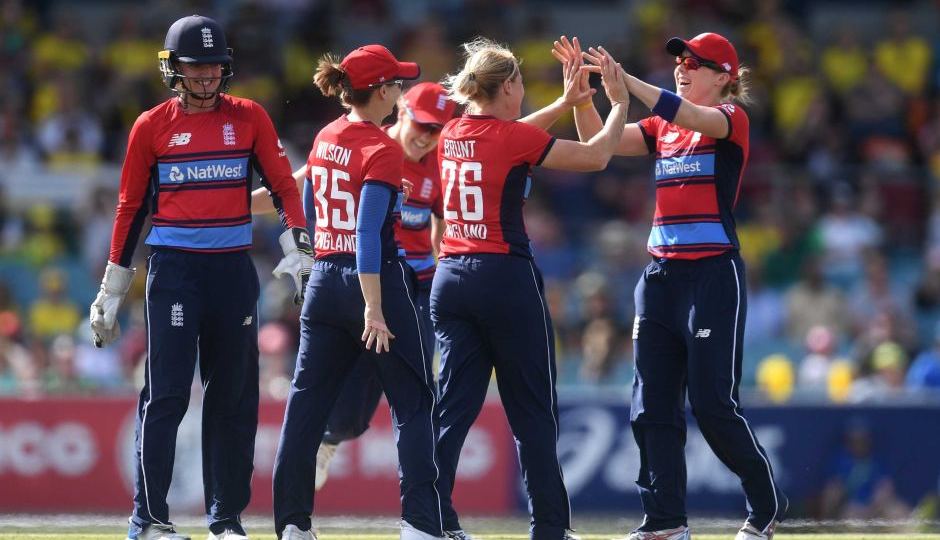 England have a chance to win the mini-series within the Ashes series if they take the next Twenty20 match. Photo: AAP

Australia’s batting line-up crumbled in pursuit of a modest target to lose the second women’s Ashes Twenty20 clash to England by 40 runs in Canberra on Sunday.

After retaining the Ashes two days ago with a comprehensive T20 victory in Sydney, only opener Alyssa Healy passed 20 as Australia was bowled out for 112 in pursuit of 153 to win at Manuka Oval.

The home side got off to a bright start to 0-45 in the sixth over, but after Beth Mooney was run out by a Jenny Gunn direct hit from mid-off, Australia lost 10-67 in a dismal collapse over the next 12.3 overs.

The result sees England reduce the multi-format series’ deficit to 8-6 with one T20 match remaining.

Healy (24) and Mooney (17) hit seven boundaries between them but the latter was unable to repeat her heroics from the first game when she struck an unbeaten 86.

Healy holed out at long-on off Gunn for Australia to sit 3-49 in the eighth over, with things deteriorating when Ellyse Perry played on a Brunt (2-10) short ball the next over for the loss of 4-7.

England won the toss, with Australia starting poorly in the field when Gardner fumbled a Danielle Wyatt skied shot toward the boundary, gathering but carrying the ball over the rope for four runs in the first over.

Opener Wyatt was dismissed for 19 when she hit fast bowler Megan Schutt (2-16) straight to Haynes at cover.

Spinner Jess Jonassen (1-18) removed Tammy Beaumont lbw in the seventh over when the English opener missed an attempted sweep shot from a straight ball.

No.3 Taylor took Kimmince for back-to-back boundaries in the 11th over, but the medium-pacer had her revenge when she threw down the stumps from point to run her out at the non-striker’s end for Australia’s third wicket.

Natalie Sciver showed good touch in compiling 40 from 31 before skying a Perry slower ball to Haynes.

Brunt (32 off 24 balls) hit medium-pacer Kimmince for a six over long-on to end the 18th over, and also cleared the boundary off Sarah Aley six balls later as England edged toward 150.

Schutt took her 18th wicket of the Ashes by bowling Fran Wilson in restricting England to four runs in the final over.

The final match of the series will be played in Canberra on Tuesday.

Consolation for England with Twenty20 Ashes win in Canberra