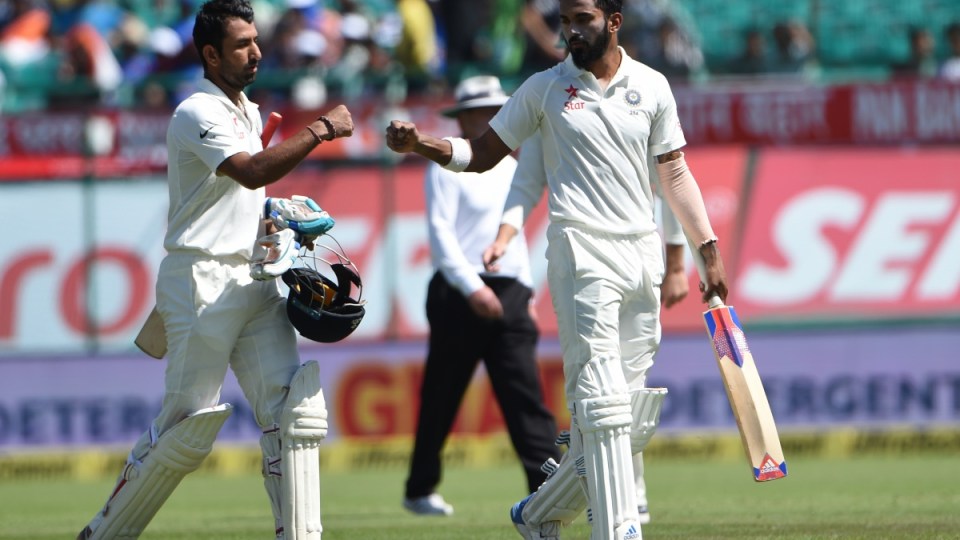 India has defeated Australia in the fourth and final Test. Photo: Getty

A spiteful, hard-fought Test series has been won by India after the home side took victory over Australia by eight wickets in the fourth and final Test to regain the Border-Gavaskar Trophy in Dharamsala.

Before the Australians arrived in India they weren’t given a realistic chance of pushing the local team, but some heroic individual performances, characterised by patience and grit, saw the Aussies take the series right down to the last innings.

Steve Smith’s side threatened to complete Australia’s second Test series win in India since 1969 after shocking the top-ranked side during the series opener in Pune.

They had control of the second and third Tests early on, lost it, then showed fight to front up to the fourth and final Test with the series level 1-1.

But Australia’s collapses in their first and second innings of the final Test ensured that it all ended not with a bang, but a whimper.

He and Murali Vijay saw off Monday night’s remaining six overs with ease, before Rahul pressed the issue.

Rahul made light work of both Steve O’Keefe and Josh Hazlewood, crashing balls into the fence to close within 60 runs of victory.

Desperate for a wicket, Smith reviewed a Cummins delivery for lbw, but it was wasted as the ball was headed down leg.

Moments later, the Australians missed an opportunity to review, which saw Vijay escape a delicate clip on the glove, but the young speedster got his man soon after, removing the opener for eight.

Glenn Maxwell’s fielding prowess was on display soon after with a direct hit to send next-in Chesteshwar Pujara back for zero.

But the dangerous Rahul remained. And accompanied by Ajinkya Rahane, India wanted to finish things in a hurry.

Cummins, insisting with the short ball, was punished with two consecutive sixes from Rahane – including a sensational cut – to cement a 2-1 series win.

Rahul put on the finishing touches with the winning runs and a monumental half-century, finishing with an unbeaten 51 off 76 balls, including nine fours.

It was his sixth 50 in the series.

Rahane ended with an aggressive 38 from 27, including four fours and two sixes.

“After Pune, I knew I couldn’t play my shots, it was a big restriction,” Rahul said after the match.

“I love to play my shots, dominate the spinners, but I had to play a different game. Pretty disappointed I couldn’t convert, but right now nothing else matters.

“Here I took a few knocks on the body. All I was telling myself, take a few hits for the team. I don’t know what else was running in my mind. The way Jinks came out and started hitting Cummins for sixes … He just came out and said I am going to dominate.”

In the last six months, India have won 10 Tests, drawn two and lost one in what as been a long home season.