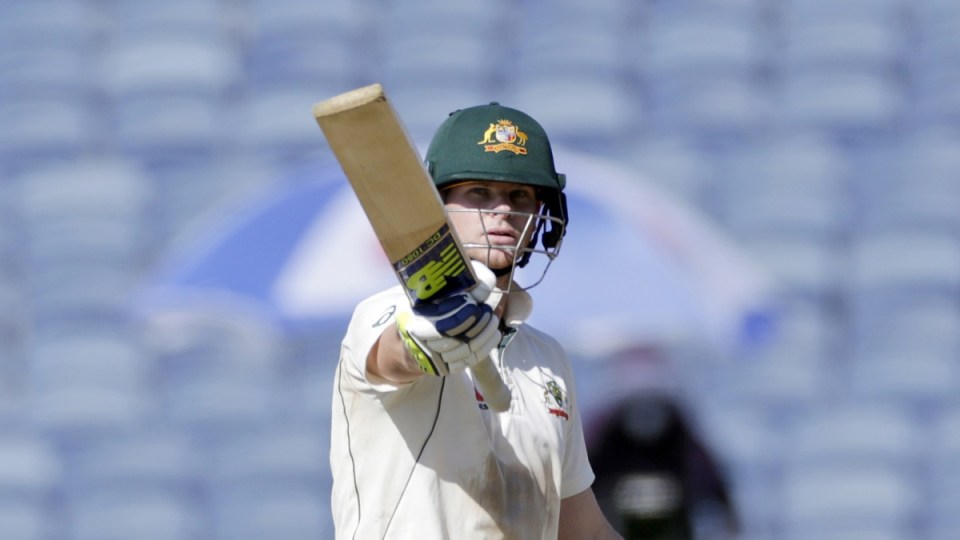 As good as Bradman? Many are drawing the comparison. Photo: AAP

Steve Smith has extended his streak of dominance against India by delivering the 20th Test century of his career in the series decider in Dharamsala, although the rest of the side let him down.

Smith’s teammates threatened to throw away the ascendancy that he and David Warner built in the high-stakes contest, with Australia all out for 300 at the end of day one.

Warner, Shaun Marsh, Peter Handscomb and Glenn Maxwell departed amid a collapse of 4-34.

Smith, dismissed for 111, looked like he was batting on a different pitch. Warner (56), Matthew Wade (57) and Pat Cummins (21) were the only other batsmen to reach double figures.

Smith’s innings will continue to fuel debate about whether he is Australia’s greatest batsman since Don Bradman.

Smith doesn’t have a commanding grip on that title, but will almost certainly grasp it if he continues to peel off hundreds with such remarkable consistency and composure.

His century may also heighten unfavourable comparisons to his rival, the out-of-form Virat Kohli, who was demoted to waterboy because of an injured shoulder.

Not that his fans minded.

This waterboy gets more attention than others 😉 #hatsoff you @imVkohli ❤ pic.twitter.com/hVmNUaG3hs

Speaking in a pre-match press conference, Smith took a veiled dig at Kohli by describing his stand-in, Ajinkya Rahane, as “a bit more chilled out” and “not that emotional”.

Smith won the toss on Saturday then brought up his half-century in 67 deliveries, picking gaps and stroking boundaries with ease as India’s rejigged attack and bumbling fielders struggled to keep the runs down.

His run-rate dipped as India fought back in the second session, with Smith digging in as debutant spinner Kuldeep Yadav ran rampant.

Yadav, debuting in the absence of injured captain Virat Kohli, turned the match on its head by kickstarting a collapse of 5-64.

The left-armer shed a tear after snaring the key wicket of Warner for 56. The vice-captain prodded forward to a ball that reared off the pitch, took the edge and carried to stand-in skipper Ajinkya Rahane at first slip.

The 22-year-old then clean bowled Peter Handscomb and Glenn Maxwell, bamboozling them with late drift and a wrong ‘un respectively.

Rahane clasped a low slips catch to dismiss Smith for 111. The classy right-hander was undone by a straight delivery from ace offspinner Ravichandran Ashwin.

The high-stakes match, which comes with the series at 1-1, started with Karun Nair putting down a one-handed slips catch offered by Warner.

Smith brought up his half-century in 67 deliveries but needed a further 83 balls to reach three figures as partners shuffled on and off the field during an eventful post-lunch session.

Umesh Yadav bowled Matt Renshaw for one in his first over, while the paceman had Shaun Marsh caught behind down the leg side.

Australia named an unchanged XI, while the hosts called up Kuldeep Yadav and swing specialist Bhuvneshwar Kumar in place of Kohli and veteran quick Ishant Sharma.

Smith is the second visiting captain to score three centuries during a Test series in India, joining Alastair Cook. Cook managed the feat in 2012, leading England to a shock series win.

If Australia record their second Test series win in India since 1969, Smith will almost certainly be named man of the series.

The 27-year-old now has seven centuries from eight consecutive Tests against India, having also ruled the 2014/15 series between the sides.