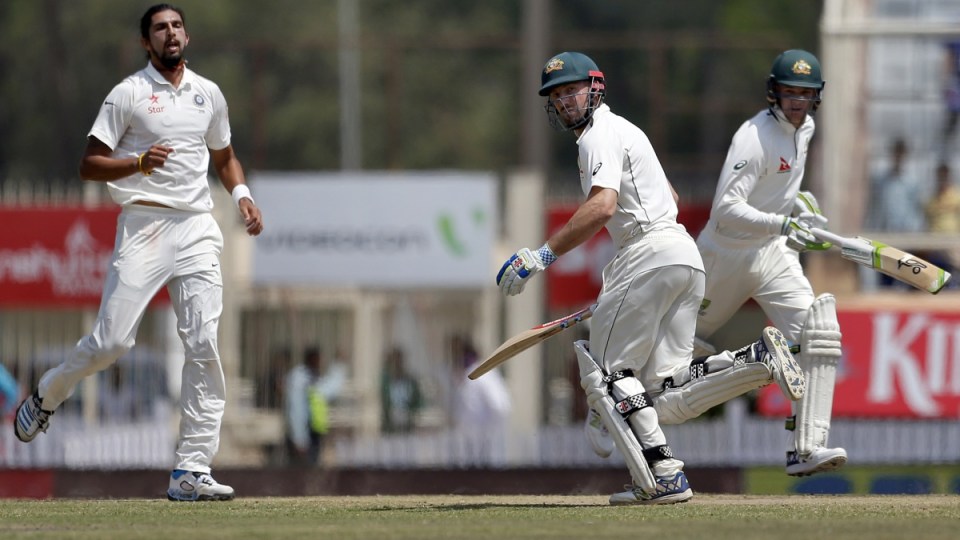 Peter Handscomb (R) and Shaun Marsh held India at bay for most of the last day in Ranchi. Photo: AP

Led brilliantly by Shaun Marsh and Peter Handscomb, Australia has held on for a stunning draw in the third Test against India.

After starting the day in a precarious position, it was left to Australia’s once-maligned middle order to rescue the game, and they did so with a remarkable 124-run partnership that lasted 373 balls.

Australia’s most widely criticised Test batsman and one of the team’s least-experienced campaigners had both endured a quiet series that called into question their spots in the side.

Handscomb had managed a total of 100 runs from five innings while Marsh’s return of just 93 was made more glaring after he had replaced in-form Usman Khawaja to start the series.

However, their resistance — Handscomb scoring an unbeaten 72 off 200 balls and Marsh 53 off 197 — not only saved the match, but gave Australia a golden opportunity to win the series as the teams head to Dharamsala with one Test win apiece.

It is a shocking prospect considering how much trouble the tourists appeared to be in before lunch.

Having lost two wickets inside eight overs on the penultimate night of the Test and trailing by more than 100 runs to start the final three sessions, Australia was in survival mode early in the hopes of eking out a draw.

A partnership between Australia’s best batsman, Steve Smith, and arguably its most watchful, Matt Renshaw, needed to be a long one, but an all too familiar collapse appeared imminent when fired-up seamer Ishant Sharma swung a ball into the pads of Renshaw (15), ending his 84-ball stand.

If Renshaw’s departure stuck a knife into Australia’s hopes, Ravindra Jadeja twisted it when he bowled Smith (21) with the skipper shouldering arms in eerily similar fashion to his counterpart, Virat Kohli, earlier in the series.

Marsh and Handscomb came to the crease shortly before lunch with the score 4-63, facing the seemingly impossible task of lasting on a dusty day-five pitch against the world’s best spinners.

But they proved they were up for the fight.

After a few overs to get settled, both players found a perfect balance between surviving and actually overhauling India’s 152-run lead by picking off loose deliveries.

They made it through the middle session, adding just 66 runs but, vitally, for the loss of no wickets.

Hopes of a historic Australian result grew at tea, but it appeared the resistance had come to an end seven balls after the break when Handscomb was trapped in front by Umesh Yadav.

It was adjudged not out on the field, India reviewed and, despite ball-tracking showing a good portion of the ball would have cannoned into the top of middle, Handscomb made it through on an umpire’s call ruling that must have had only millimetres in it.

Twelve overs later it was Marsh’s turn to narrowly survive a huge LBW appeal when Ashwin, with a new ball and a fresh set of reviews at his disposal, caught him on the crease two runs short of the half-century.

But he too made it through on a tight review.

It seemed Australia’s luck had turned and, with a minimum of 15 overs remaining and a slowly growing lead, Australia could see the light at the end of the tunnel.

Marsh eventually fell when he popped his 197th delivery to silly mid-off, but with the match into its final 40 minutes, he had more than done his job.

First-innings centurion Glenn Maxwell only added two runs before falling in similar fashion, with Handscomb and Matthew Wade (9 not out) ultimately taking Australia to stumps on 6-204.