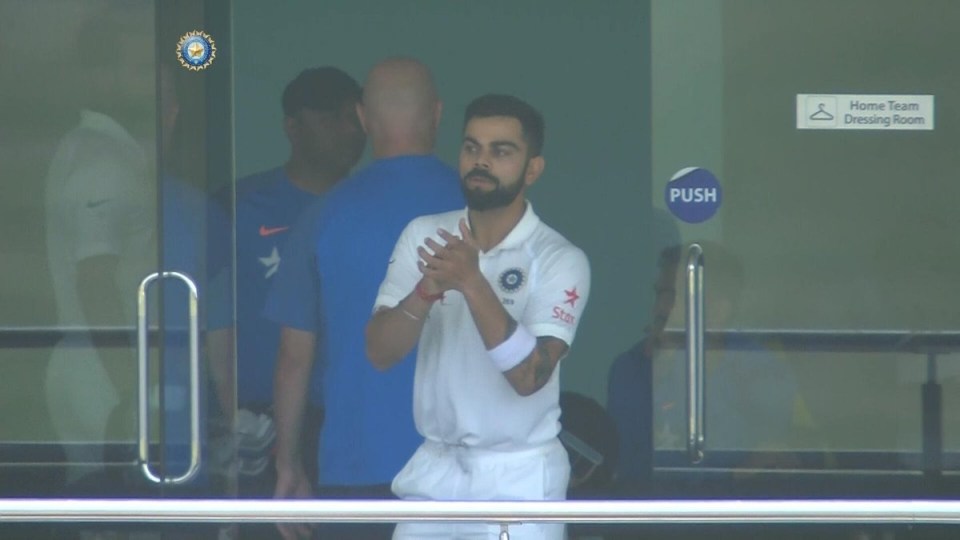 Virat Kohli antagonised Australia from the balcony of the hosts’ change room in Ranchi, but the visitors dismissed India’s captain cheaply for a fifth time in as many innings in this series.

Kohli was dismissed for six, but an unbeaten century from  Cheteshwar Pujara and an impressive return to Test cricket from Australian paceman Pat Cummins left this third Test in the balance at stumps on day three.

Earlier, a smirking Kohli emerged from the rooms after Steve O’Keefe’s lbw appeal against Pujara – and subsequent review – was controversially waved away by third umpire Nigel Llong.

Kohli childishly clapped and cheered the unsuccessful review by the visitors. His applause for what he deemed an error by counterpart Steve Smith came three days after match referee Richie Richardson called on both skippers to ensure their teams behaved much better than in Bangalore, which hosted one of the more spiteful Tests of the modern era.

The snickometer, though, suggested Llong might have actually made a mistake, not skipper Smith.

Llong ruled the lbw appeal, which came when India was 1-149 and  Pujara was on 22, was correctly given not out because the ball hit the bat first.

But there was a clear spike in the snickometer before the ball hit the willow, which suggest it glanced the front pad first and Llong should have rolled the ball-tracker replay.

“The ultra edge looked like it lit up before it hit the bat,” Brett Lee said while commentating on Star Sports.

“Front-on it looks clearly like it hits bat first.”

The decision meant Australia had used up its reviews and could not refer any more decisions upstairs.

Smith’s angst increased at the next delivery, when a confident appeal for a bat-pad catch off Nathan Lyon was turned down.

Murali Vijay was on 58 and replays confirmed he edged the ball and would have been out had Smith been in a position to refer the decision.

But Smith soon had reason to cheer and applaud at Kohl’s expense.

Kohli, who was nursing a shoulder injury that prevented him fielding on day two, came in to bat in the No.4 slot, and was promptly dismissed for 6 …. caught by Smith at second slip off the bowling of Cummins.

Cummins (4/59 off 25 overs) and Josh Hazlewood bent their backs throughout an absorbing day in which wickets and runs were hard to come by.

Pujara's class keeps India alive on a day when Australia showed their class with the ball. Was a drip-drip day but they managed it well

Cummins removed Ajinkya Rahane and Ravichandran Ashwin with bouncers on a fairly lifeless pitch, and former captain Michael Clarke suggested from the commentary box that the paceman had been ”outstanding” in his first Test in six injury-interrupted years.

“(Late in the day) he still has that little hint of reverse swing coming back in,” Clarke said.

Pujara batted with intense concentration to be 130 not out at stumps, and in doing so became the first Indian batsman to score a century in this series.

He built partnerships with the other top-order batsmen, apart from Kohli, who was the only one not to reach double figures.

His miserable series continued and he has now scored just 46 runs from his five digs against Australia.