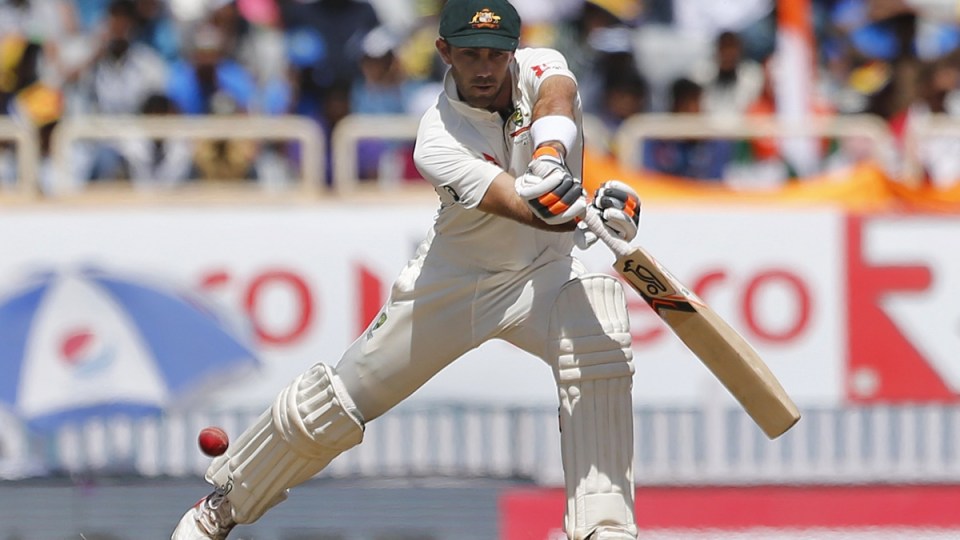 Steve Smith starred with an unbeaten 178 and Pat Cummins returned with a bang on day two of the third Test, but India made it clear how hard Australia will have to work for victory.

Smith shared a superb fifth-wicket partnership of 191 with all-rounder Glenn Maxwell before running out of partners as the tourists compiled a total of 451 on Friday.

That figure would have been imposing on many pitches, but the wicket in Ranchi isn’t one of them.

The top-ranked Test side was 1-120 in response at stumps, with Cummins the only bowler to consistently trouble the Indian batsmen.

Cummins, playing his first Test since a memorable debut almost six years ago, bowled with great pace and was rewarded with the wicket of opener KL Rahul.

The NSW paceman bent his back to produce steepling bounce on the slow-and-low surface, with Rahul attempting to evade a bouncer but instead gloving it to keeper Matthew Wade.

Rahul fell for 67, his fourth half-century in the four-Test series. Murali Vijay finished 42 not out, while Cheteshwar Pujara was unbeaten on 10 after swapping barbs with Wade.

It means Virat Kohli, who didn’t field at all on day two, will have another night to rest his injured shoulder.

Cummins dismissed fears about his conditioning by delivering a six-over spell late in the final session.

Earlier, Smith faced 361 deliveries and batted for 512 of the 558 minutes that Australia’s first innings spanned.

It was Smith’s third ton on tour and his second in the four-Test series. The classy right-hander has set many run-scoring records as skipper, but those in Ranchi are arguably his most impressive.

No Australian captain has thrived so consistently in India, widely considered the hardest place for Australians to bat because conditions are the antithesis of what they’re used to at home.

Only two other visiting Test captains have scored two or more centuries in a series in India: the West Indies’ Clive Lloyd and England’s Alastair Cook.

Before Smith’s knock, no Australian captain had come close to such dizzying heights. The highest Test score by an Australian skipper had been Michael Clarke’s 130 in Chennai during the ill-fated 2013 tour.

For Maxwell, his maiden century completed an impressive transformation from out-of-form outcast to middle-order linchpin.

He began day two on 82, and when he reached 99 he patiently faced seven dot balls before cutting a wide delivery from Umesh Yadav for four.

It triggered wild celebrations from Maxwell, whose career was at the crossroads late last year when he was dumped from Australia’s one-day team and left out of Victoria’s XI for the Sheffield Shield opener.

Maxwell also raised eyebrows in December when he lamented the fact he batted below state captain Matthew Wade at Victoria, earning a public rebuke from Smith.

But Smith was their to bear hug Maxwell and roar with delight when the latter reached three figures.

Maxwell was filthy with himself for falling soon after to the left-arm spin of Ravindra Jadeja on 104, knowing how well the pitch was playing and with Australia likely to require a monster total to win.

Australia has started a Test in India by posting a total of 400 or more on eight occasions, but managed to win only one of those games.