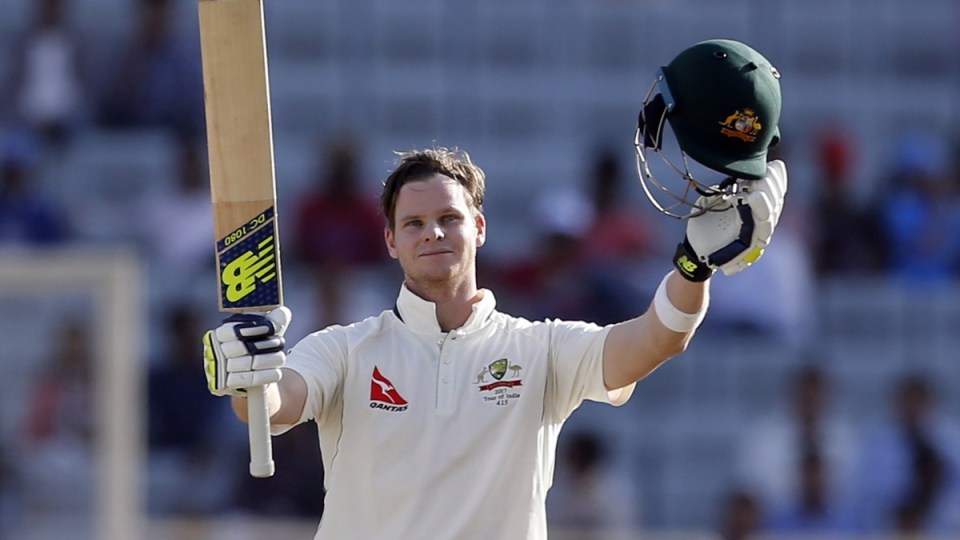 Another day, another Test century for Steve Smith. Photo: AP

Steve Smith has put a week of controversy behind him in the best way possible, crafting an impressive captain’s century on day one of Australia’s third Test against India.

Smith’s century, and Glenn Maxwell’s breakthrough performance, pushed the visitors to 4-299 at stumps.

The pair dominated the hosts on Thursday, sharing an unbeaten 159-run stand in Ranchi.

It is already Australia’s highest fifth-wicket Test partnership in India and comfortably the highest stand in the ongoing four-Test series.

Smith was booed off the park in Bangalore, having outraged counterpart Virat Kohli by looking to the stands for illegal advice over a potential review.

On Thursday, Smith infuriated Kohli with an innings that could potentially put Australia on track to retain the Border-Gavaskar with a victory in Ranchi.

Smith, who is 117 not out, became the first Australian to score two Test tons in India as skipper, having also raised the bat in Pune.

Smith’s 19th ton was one of his most remarkable because it was largely a stress-free knock that came when the skipper and his side were under immense pressure after slipping to 4-140.

Smith, so animated at the crease in the previous two Tests, batted as if the contest was centre-wicket practice.

The only exception came when he spent almost an hour in the nervous 90s. It was a product of Smith’s determination not to fold and Maxwell’s potency at the other end.

Kohli, sidelined with a shoulder injury, watched on from the changerooms as Smith made a mockery of India’s star-studded attack.

It didn’t matter what approach the bowlers took, or the fields set by vice-captain Ajinkya Rahane.

With the exception of a false stroke to Ravindra Jadeja in the 62nd over, there was hardly a misstep from the classy right-hander.

Smith was in his element, smothering everything on his stumps but making good use of the fast outfield whenever India delivered anything loose.

“Steve Smith has had such a different mindset compared to the other two Tests,” Matthew Hayden said on India’s Star Sports.

“In the last Test match, he was incredibly amped.”

Smith cleared his mind between Tests during a visit to his sponsor’s bat factory in Jalandhar.

That is not to say he mellowed. Smith, still unhappy with his counterpart’s post-match tirade in Bangalore, accused Kohli of talking “rubbish” on Wednesday.

Even when umpire Ian Gould and some Indian fielders enjoyed a moment of levity, laughing at Wriddhiman Saha’s clumsy attempt to pluck the ball from between Smith’s legs, the batsman was stony faced.

The 27-year-old passed 5000 Test runs during Thursday’s dig. No Australian has celebrated the milestone at a younger age.

Maxwell, meanwhile, playing the fourth Test of his career and first since 2014, steadied with his longest ever international innings in any format.

The allrounder finished 82 not out after facing 147 deliveries. He waited some 56 balls before striking a boundary.

It was a different kind of potency to what Maxwell has demonstrated in ODI and Twenty20 cricket, but exactly what Australia needed. Maxwell’s dig was notably the highest score by an Australian No.6 since Smith’s century against South Africa in 2014.