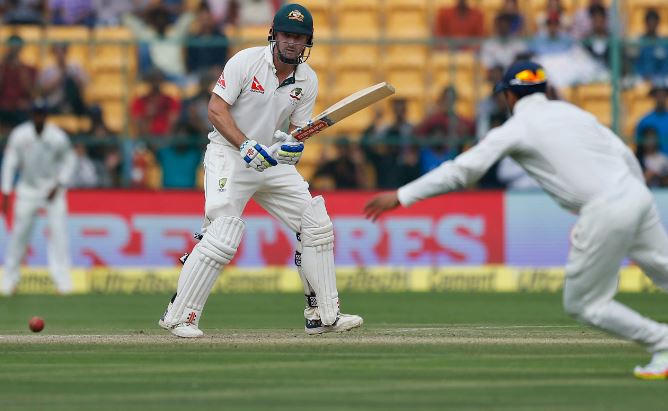 Australia defied an inspired Indian fightback to claim a 48-run lead at stumps on day two of the second Test in Bangalore.

Half-centuries from Shaun Marsh and Matt Renshaw, who both epitomised the tourists’ graft on a tense Sunday at M Chinnaswamy Stadium, pushed their side to 6-237 at the end of play.

Billed as a series-defining day after Nathan Lyon claimed eight wickets to spin the hosts out for 189, India rallied for the first time in the four-Test series.

There was no shortage of twists, turns and terse words – especially between opposing skippers Virat Kohli and Steve Smith.

Smith and Kohli repeatedly swapped barbs throughout the morning – even at the drinks break when they were separated by a couple of metres.

Former Australia skipper Michael Clarke suggested it was a clear attempt from Kohli to unsettle his Australian counterpart following the home team’s unexpected struggles early in the series. 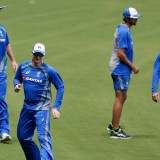 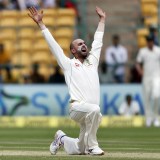 “Virat Kohli and Steve Smith are going at it. Between overs Virat was into Steve Smith. It looks like Smith is going back as well,” Clarke said on Star Sports. “It’s the pressure here, it might be getting to both teams.”

Australia produced arguably their most-patient batting display in the Twenty20 era, adding 47 runs in the morning session and just 197 for the day.

Smith managed eight runs from 81 minutes at the crease. Marsh and Renshaw each faced almost 200 balls, scoring 66 and 60 respectively.

Led by chirpy captain Kohli and shrewd spinners Ravichandran Ashwin and Ravindra Jadeja, the hosts ensured runs were at a premium. Yet the top-ranked Test side were also guilty of sloppy reprieves.

Kohli was at first slip when he dropped Renshaw on 29, while he made a couple of indefensible Decision Review System (DRS) blunders.

Marsh was on 44 and Australia still trailed by 14 runs when he successfully reviewed a lbw dismissal. The following over, Marsh would have been plumb lbw if paceman Ishant Sharma had kept his foot behind the line.

Marsh’s impressive innings ended when he needlessly chipped an unthreatening ball to Karun Nair at midwicket.

Renshaw fell when he charged at Jadeja for a third straight ball, prompting the left-arm spinner to spear his delivery down the leg side and have the 20-year-old stumped.