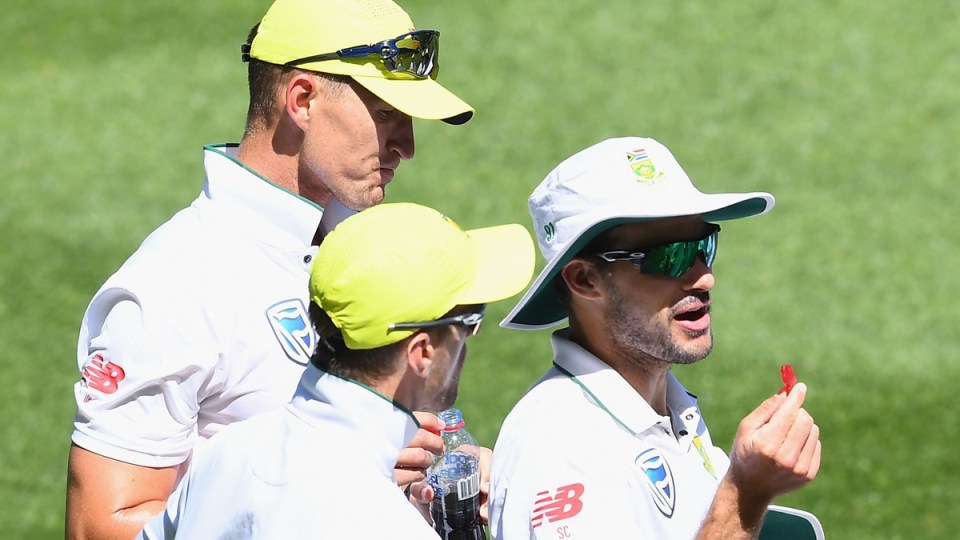 The South Africans show off lollies in a tour match against Victoria. Photo: Getty
analysis

The South African cricket team has become a problem.

And that’s why the International Cricket Council (ICC) needs to come down hard on it and remind the immature bullyboys that they are not above the law.

What started out as an allegation that acting captain Faf du Plessis had broken the rules of cricket by tampering with the ball – for which he has been charged – during the Proteas’ emphatic second-Test win has turned into a display of utter petulance.

And the touring party’s outright aggression towards the Australian media has escalated into physical attacks.

First, Channel 9 reporter Corey Norris was manhandled while doing his job over the weekend, and on Monday, his colleague Will Crouch was assaulted at Adelaide Airport. 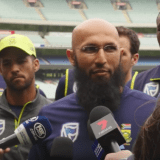 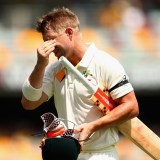 Both had been attempting to question du Plessis – a more than reasonable request.

And while both were persistent in their line of questioning, South Africa’s response was completely uncalled for, as security man Zunaid Wadee decided the best form of defence was attack.

Shielding du Plessis on both occasions, he not only pushed Crouch but then shouldered him in the back and pushed him against the wall in an incident widely criticised on social media.

A security guard has clashed with a TV reporter at the Adelaide Airport as the South Africans arrive ahead of the Third Test. #AUSvSA pic.twitter.com/tBfxZOujCF

Du Plessis was never going to speak to the press, given the ICC’s ongoing investigation.

But the response of the South African staff, and the fact du Plessis was showing off the fact he was sucking on a mint at the airport, is a terrible look for cricket.

The situation is being inflamed by South African players, too, who have been posting self-serving, nasty and ignorant comments on social media.

In one tweet, injured fast bowler Dale Steyn referred to what others see as a serious charge against his skipper as “a fabrication”, while insisting that he “won’t let” it tarnish the series win. He also bragged his side is mentally tougher than Australia.

Here's a idea, Let's blame it on a lollipop 🍭 #soft

Just so we clear, I'm not blaming the aussies, but I won't let a fantastic series win be tarnished by some lollipop fabrication. 3-0 mission

How about a modicum of self-awareness, Dale?

It is you and your teammates who are tarnishing not only this series but the sport, as a whole.

Steyn, Hashim Amla, du Plessis and other Proteas seem more than happy to point fingers at everyone except themselves for the manner in which the tour has degenerated.

Rather than accepting that du Plessis had been caught out – the vision clearly showing him rubbing his finger on a lolly in his mouth then massaging the sugary saliva into the leather on one side of the ball – the Proteas have gone down the shoot-the-messenger, circle-the-wagons, deny-any-wrongdoing path.

Conveniently ignoring the fact that it wasn’t the Australian players or media that charged du Plessis with a breach of cricket’s Law 42.3 – which prohibits using an artificial substance to change the condition of the ball – but rather ICC chief executive Dave Richardson, a South African, the tourists have significantly escalated the initial offence.

The absurd song and dance du Plessis’ teammates have made, starting by embarrassing themselves with a childish “show of support” by massing behind Amla at a media call last week, has shown that, far from respecting the game and their opponents (and hosts), they have scant respect for anyone.

For the Proteas to make a further public display of contempt by playing around with lollies during their tour match against a Victorian XI at the MCG at the weekend reinforced their disrespect for the rules and those who seek to enforce them.

Someone here needs to care about the image of the game. And that’s where the ICC step in.

It is the governing body’s role to protect cricket’s integrity and to reinforce the message that the “spirit of cricket” still matters.

It matters because the top players, watched by millions on television, set the example, with both their actions and their words.

That’s why players are rightly sanctioned if they show any dissent toward an umpire.

Hopefully the ICC takes its role seriously and sees fit to put the ball-tampering genie back in its bottle before it’s too late.

If we’re lucky, the ICC will pop the cork back in with a sledgehammer.

Then there needs to be serious sanctions against Cricket South Africa for the actions of its employees – players included – because, through its inaction, the national governing body appears to condone the behaviour of its team of petulant sore winners.

But I won’t be holding my breath.

Murray Brust has been covering international sport in a variety of roles for nearly three decades.

The ICC must throw the book at the embarrassing South Africans