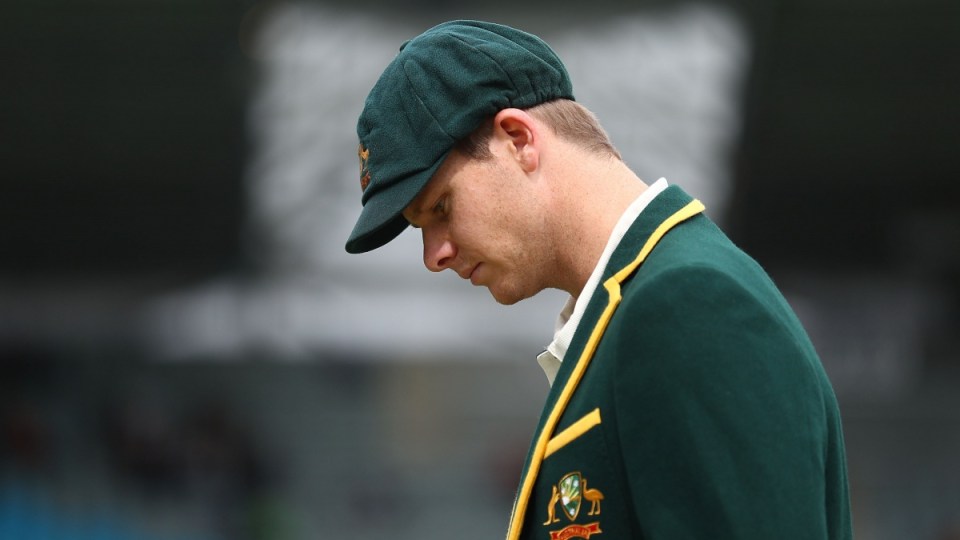 Steve Smith can not shoulder the blame for the batsmen's inability to knuckle down.
analysis

The last time Australia was bundled out for such a paltry total in a home Test was against the all-conquering 1984 West Indies pace attack on a frightening WACA pitch.

The supreme Malcolm Marshall, Michael Holding and Joel Garner ripped through the Australian batting order for just 76 runs. The Windies’ fourth paceman, debutant Courtney Walsh, didn’t even get to bowl.

And yet — with respect to Vernon Philander and co — that was arguably a more admirable batting effort than the 85 Australia produced on day one of this second Test against South Africa in Hobart.

Back in 1984, Australia was at a low ebb and Kim Hughes would  memorably last just one more Test as captain before dissolving into tears as he announced his resignation.

Allan Border reluctantly took over as skipper and the slow process of dragging Australian cricket out of one of its rare dark ages began. 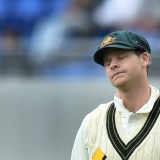 Aussies in crisis: all out for 85 in second Test

Now there seems to be a push to force circumstances to just such a denouement under Steve Smith’s stewardship.

This despite the fact that Smith was the only batman to show any ticker, unbeaten on 48 (four times more runs than the other top six batsmen combined).

Let's all calm down! Judge this wicket after SA has batted please! CALM DOWN! EVERYONE!

Earlier in the day  Cricket Australia chief James Sutherland had felt compelled to come to the defence of his captain and the Test team’s culture.

“It’s a tough job being a captain of a cricket team but we’ve got great confidence in Steve, he’s a world-class batsman, he’s doing the right thing,” Sutherland told Fox Sports

“He probably hasn’t got the stand-out team that (previous captains) inherited when they came into the job and I think if we give him time we’re absolutely confident he’s the right man for the job.”

It also may be that there is no better candidate than Steve Smith for the captaincy at the moment. No Allan Border waiting to blossom in the wings.

It’s also worth remembering that only four Tests ago Australia was ranked the No.1 team in the world.

Graeme Smith had suggested that the Australian team, which has now posted four consecutive Test losses to the Proteas, was not up for the fight.

“It’s nearly laughable for him (Smith) to be making comments on the culture of the Australian team,” Sutherland said.

Graeme Smith, who captained South Africa in 108 Tests, questioned whether the players Australia placed enough value of representing their nation.

“If I think about earlier years, it was always built on respect and the value of the baggy green,” he said during the week.

“Maybe players didn’t always get on but they respected the environment and they were traditional and they understood the importance of what playing for Australia meant.”

The South African played his last Test in 2014 and Sutherland said he was out of touch.

“He wouldn’t know what’s going on in the Australian dressing room and (it’s) inappropriate for him to comment.

“He’s just being opportunistic to throw a bomb.”

But this latest capitulation will have some echoing Graeme Smith’s sentiments.

Even Australian coach Darren Lehmann conceded at stumps that the situation had become critical.

“When you’re playing badly, your’re going to cop it … there’s a lot of criticism out there, that’s warranted.

“Once we have a collapse we seem to have a big one. Someone needs to stop that rot and have a partnership somewhere.”

If you're new to cricket, 85 is a decent score. Not for an entire team of course but an individual. #AUSvSA

One undeniable fact is that Australian batsmen have lost the capacity – epitomised by Border – to grit their teeth, tough out quality bowling and be patient in their compilation of a score.

Australia has made five team scores of less than 100 since 2010, including the appalling 47 in Cape Town five years ago. It only failed  ≈to get to 100 once in the previous two decades.

Former captain Mark Taylor said after the match that the batsmen betrayed a “lack of confidence, this belief they’re going to get out to good bowling, and that’s what’s happening”.

Whether it be a lack of confidence or partnerships, the fast-food mentality of T20 batting, the overabundance of flat domestic batting decks or the talent drain to other sports, the batsmen are letting Australia down.

All of those factors need to be examined. And more.

In the meantime, it wouldn’t hurt to see a few Australian batsmen prepared to put away the extravagant shots, leave a few deliveries and wait until after lunch or even tea to try to get among the runs.

Lack of fibre in the batting, not captaincy