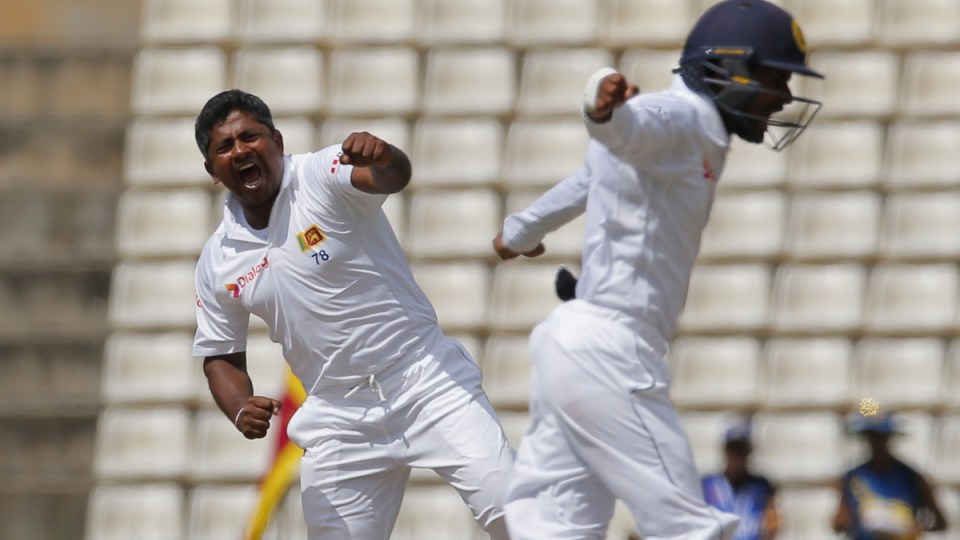 Australia have failed to capitalise on their day-one dominance, exposed by Sri Lanka’s spinners in the first Test in Kandy.

The tourists were dismissed for 203 midway through the second session of day two on Wednesday to take an 86-run first-innings lead after skittling Sri Lanka for 117.

Sri Lanka were 1-6 with Mitchell Starc trapping Kusal Perera lbw for four just before rain forced the players from the field.

The last session of day one was also abandoned due to rain.

Australia’s recent frailty against spin bowling on the sub-continent was highlighted once again at Pallekele Stadium.

While the pitch was conducive to turn, Australia – following a longer-than-usual preparation to get accustomed to the local conditions – were unable to cope with Sri Lanka’s variety of spinners.

Smith and wicketkeeper Peter Nevill were dismissed in ugly fashion, but the rest were undone by skill and guile as Sri Lanka’s bowlers got their side back into the contest following a horror batting display.

Australia won’t want to chase many in the fourth innings to win, so they’ll be intent on repeating something similar to day one when they blasted out Sri Lanka in 34.2 overs.

The rot started for Australia when Smith tried to assert himself on Herath.

In just the second over of the day, Smith charged down the wicket and attempted to bang the veteran down the ground but was nowhere near the pitch of the ball, awkwardly missed and was stumped by Dinesh Chandimal.

Voges survived a lbw review first ball but, soon after, Usman Khawaja was out lbw to Herath and Australia had slumped to 4-70 after resuming at 2-66 under bright skies.

Marsh hit some crunching drives in his 31 but played inside the line to the left-arm wrist-spinner’s wrong’un and was bowled.

The wicketkeeper’s shot wasn’t any prettier to watch than his skipper’s.

Voges was typically patient and studious, lasting 115 balls before being caught at gully to a sharp low catch from Kusal Mendis off the bowling of quick Nuwan Pradeep (2-36).

Australia cut down by spinners in Kandy