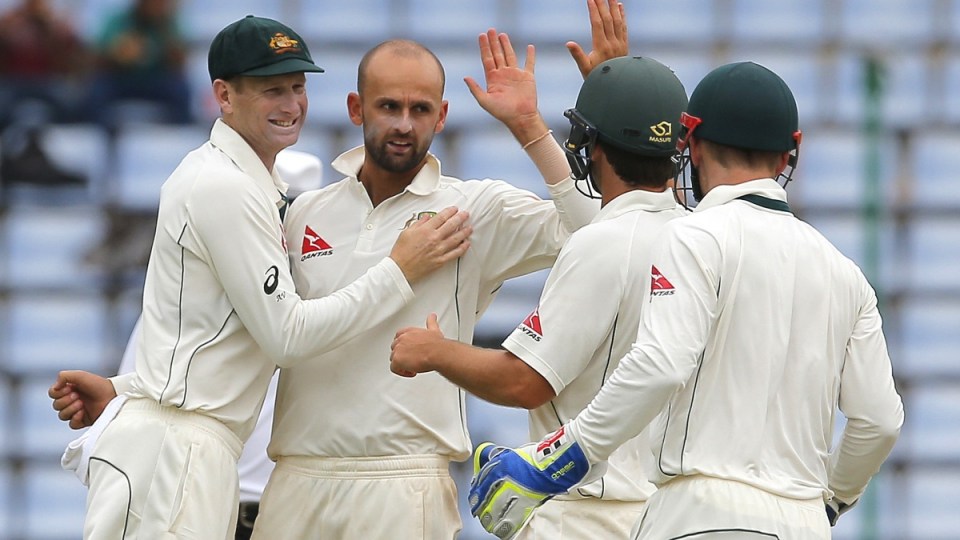 Wickets tumbled then the rain fell steadily as Australia asserted their dominance over Sri Lanka on Tuesday’s opening day of the first Test in Kandy.

Despite losing the toss, the tourists blasted the home side out for 117 before recovering from a shaky start with the bat, going to tea at 2-66.

The forecast rain came to Pallekele Stadium just before the last session was due to start and no further play was possible on day one.

When day two starts 15 minutes early on Wednesday, skipper Steve Smith will resume on 28 not out and Usman Khawaja unbeaten on 25.

The tourists were in strife early in their reply, David Warner making a five-ball duck and Joe Burns out for three as they slumped to 2-7.

Smith and Khawaja then consolidated, setting a solid base for Australia to push past Sri Lanka and build a sizeable first-innings lead.

They will try to emulate when Australia played at Pallekele on their last tour in 2011 when they skittled Sri Lanka for 174 and then, on the back of tons from Shaun Marsh (141) and Mike Hussey (142), racked up 411.

It was a dismal batting display by Sri Lanka, given captain Angelo Mathews had won the toss and elected to put first runs on the board.

Mathews’ decision backfired badly, with the humid conditions and a green tinge to the pitch offering the Australian bowlers just enough ball movement both in the air and off the wicket.

They were all out midway through the second session in just 34.2 overs, with the tiny total their fourth-lowest against Australia in 27 Tests.

Josh Hazlewood was particularly impressive, bang on the money from the start in taking 3-21 from 10 tight overs.

New-ball partner Mitchell Starc, returning to the team after missing Australia’s past six Tests due to ankle and foot issues, took the first wicket when he trapped Dimuth Karunaratne lbw for five but was relatively expensive with figures of 2-51.

Recalled spinner Stephen O’Keefe (2-32) was brought into the attack in just the ninth over of the innings and bagged the big wicket of Mathews – Sri Lanka’s best and most-experienced batsman – for 15.

O’Keefe produced a cracker to dismiss Mathews when he drew the big allrounder forward and the ball gripped in the wicket and took the shoulder of the bat, with captain Steve Smith snaring the catch at first slip.

Senior spinner Nathan Lyon (3-12) took his wickets in seven balls after lunch and he’s two away from 200 Test scalps.

Debutant Dhananjaya de Silva top-scored with 24 while Kusal Perera made a quickfire 20 from 15 balls.