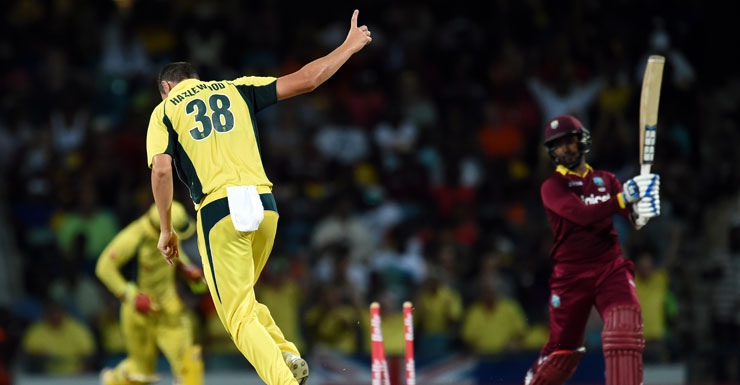 Matthew Wade rallied with the bat then Josh Hazlewood and Mitch Marsh roared with the ball as Australia defeated West Indies by 58 runs in the ODI tri-series final in Barbados.

Steve Smith’s side crashed to be 6-173 in the 37th over after the skipper won the toss at Kensington Oval.

But Wade’s unbeaten 57 helped the visitors bat out their overs and scrap together a total of 9-270.

The decider was in the balance until Marsh blitzed the hosts’ form batsmen.

The all-rounder snared 3-2 in the space of 12 legal deliveries, including the key scalps of Darren Bravo and Marlon Samuels.

Bravo feathered an edge to wicketkeeper Wade, while Samuels chipped a slower ball to George Bailey in the covers.

Johnson Charles, who top-scored for West Indies with 45, was then trapped lbw by the 24-year-old.

Marsh finished with figures of 3-32 from 10 overs, having earlier scored 32 and been one of Australia’s top five to fall after making starts.

Wade showed great composure in a timely show of leadership, having been under pressure to deliver after being preferred ahead of Test wicketkeeper Peter Nevill.

Wade mixed dogged determination with dashing strokes as he conjured a competitive target with the help of Mitchell Starc, Nathan Coulter-Nile and Adam Zampa.

It was just the second time Australia added 25-plus runs for each of the seventh, eighth and ninth wickets in an ODI.

Wade was cautious early, managing one run from 11 deliveries as the locals gave him plenty of lip.

But the Victorian belted three sixes to finish his side’s top-scorer and with a strike-rate of 110.

West Indies didn’t help themselves with a couple of poor errors in the field during the final 10 overs, most notably a simple missed run-out from Denesh Ramdin when Wade was on 29.

Smith, who scored 46 before falling to an unthreatening short ball from Shannon Gabriel, will be content with another trophy but unhappy Wade was left with so much work to do.

Smith, Marsh, Aaron Finch and George Bailey all spent over half an hour at the crease then threw away their wickets.

Finch clubbed 47 off 41 balls and looked in particularly formidable touch, only to smash a slower ball from Kieron Pollard straight to Samuels in the deep.

Smith steadied but Australia slipped to 5-156 when the skipper and Glenn Maxwell were both dismissed by Gabriel in the 31st over.