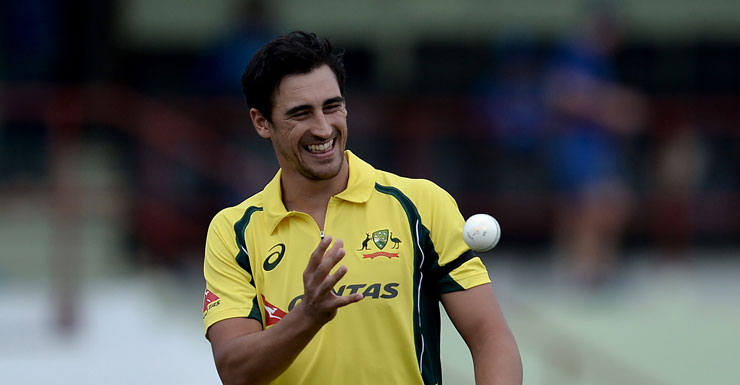 A snarling Starc struck twice in his return from ankle surgery, removing both openers as Australia started the tri-series in style.

Nathan Lyon and Adam Zampa also starred as the hosts capitulated in just 32.3 overs on a spin-friendly Georgetown pitch.

The West Indies were always going to find it hard defending their lowest ever ODI total at home against Australia.

Aaron Finch, Usman Khawaja and Steve Smith fell after making starts, while Glenn Maxwell was clean bowled for a second-ball duck by a marvellous delivery from offspinner Sunil Narine.

Despite a collapse of 3 for 7, the visitors cruised to a six-wicket victory in 25.4 overs.

David Warner finished on 55 not out, extending the purple patch that netted him an Indian Premier League title as skipper of Sunrisers Hyderabad.

West Indies looked a shadow of the side that upset South Africa in the tournament opener at the same venue.

The hosts were reduced to 5 for 70 in the 17th over then slipped to 8 for 91, ruining their hopes of a half-decent total.

Lyon and Zampa stifled the run-rate and shared six wickets but it was Starc who started the rot.

The left-armer was not at his sublime best, as you would expect from any fast bowler who has not played for so long.

But the 26-year-old’s mix of express pace and late swing remained as potent as ever.

Starc, handed the new ball after Smith won the toss, started the match with an eventful over.

It featured a full toss so high it was no-balled, an lbw appeal that Smith reviewed only for replays to show a clear inside edge, and the dismissal of Andre Fletcher.

Fletcher slashed a wide ball straight to Maxwell at point.

Starc returned after his three-over opening spell to dismiss opener Johnson Charles, who edged an in-swinging yorker onto the stumps.

The tweakers kept the wickets tumbling.

Lyon, who was on a hat-trick after accounting for Marlon Samuels and Kieron Pollard, finished with figures of 3 for 39 to bolster his bid for a permanent gig in the canary yellow.

It could easily have been even worse for the hosts.

Charles, who top-scored with 22, was on 10 when Lyon had a confident lbw appeal turned down.

A review would have overturned the verdict but Smith wasted the side’s only referral in the opening over.

Australia, who banked a bonus point in their tournament opener, next faces the Proteas at 3:00am AEST on Wednesday.