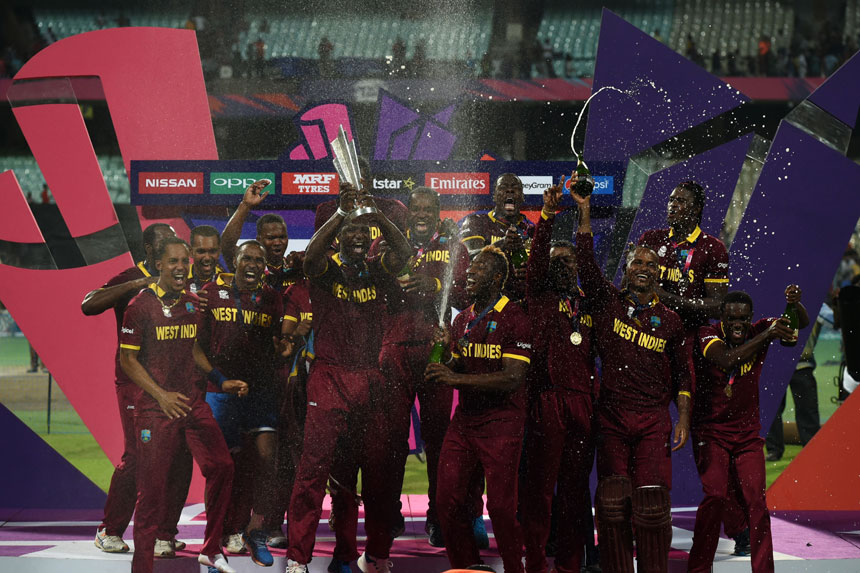 Carlos Brathwaite smashed four sixes from as many balls in the last over to lead the West Indies to victory in the ICC World Twenty20 final on Monday morning (AEST).

But Marlon Samuels, who hit 85 not out off 66 balls, kept the West Indies in the contest with an excellent innings.

They still needed 45 runs off the last four overs and 19 off the last before Brathwaite – who hammered 34 off 10 balls – stole the show.

Facing Ben Stokes (0-41 off 2.4 overs), he clobbered each of the first four balls of the 20th over for six to spark wild celebrations among the West Indies players.

It also capped a double for the team, after their women’s Twenty20 side edged Australia in another thrilling final earlier in the day.

England were sent in to bat and also lost early wickets, slumping to 3-23 in the fifth over.

Joe Root (54) and Jos Buttler (36) led the revival, though, as England pushed towards a respectable score.

Brathwaite (3-23 off four overs) removed both Root and Buttler but David Willey (21) and Chris Jordan (12) chipped in with valuable runs to set the West Indies a difficult total.

Part-time off-spinner Root opened the bowling and dismissed Johnson Charles (1) and Chris Gayle (4) in his first over and Lendl Simmons – the West Indies’ semi-final hero – then fell for a duck.

It left an almighty repair job for Samuels and Dwayne Bravo, who put on 75 runs for the fourth wicket in 11-and-a-half overs.

That set the platform for the West Indies and despite a triple-breakthrough from Willey, Samuels remained at the crease.

His runs and calmness were crucial before Brathwaite wrote his name into the history books, capping a remarkable three weeks of cricket on the sub-continent.

Samuels dedicated his man-of-the-match award to critic Shane Warne, before launching a tirade against him in his post-match press conference.

“Shane Warne has a problem with me,” Samuels said.

“I’ve never disrespected him…I don’t know. Maybe because my face is real and his face is not?”

Samuels also aimed fire at a ‘nervous’ Stokes after the match in a press conference that had to be cut short due to his ranting.