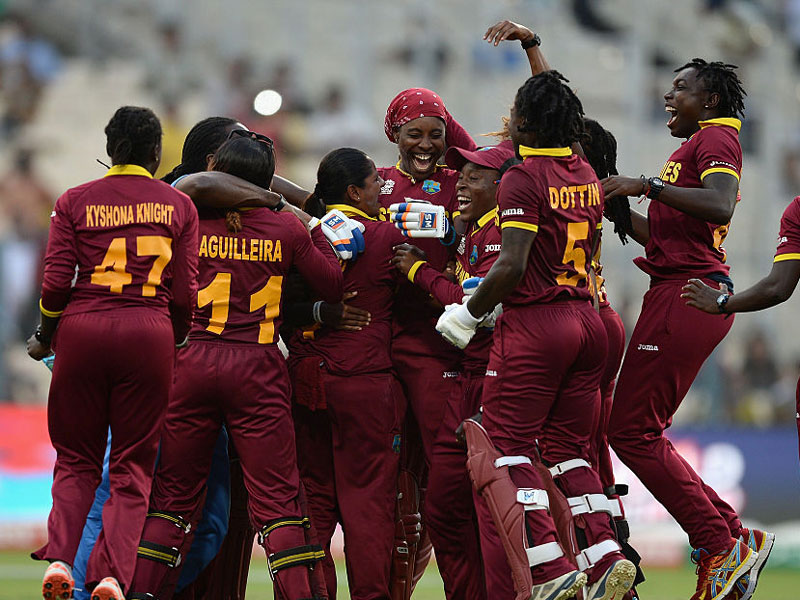 West Indies have ended the Southern Stars’ bid for World Twenty20 domination, hauling in a target of 149 to win a dramatic decider in Kolkata.

Half-centuries from Meg Lanning and Elyse Villani powered Australia to 5-148 on Sunday, their highest score of the tournament and a record total for a women’s World T20 final.

It looked the perfect platform for a side seeking their fourth straight T20 title – an unprecedented feat in either men’s or women’s cricket.

But skipper Stafanie Taylor and 18-year-old Hayley Matthews made a mockery of the tricky target at Eden Gardens.

The pair shared an 120-run opening stand, firing their side to an eight-wicket victory with three balls remaining.

Britney Cooper and Deandra Dottin scampered through for the winning runs by taking an overthrow after Megan Schutt missed a run-out chance from close range.

It triggered jubilant celebrations, with members of West Indies’ men’s and women’s sides rushing onto the field and dancing.

Taylor declared pre-match that her team, contesting their first World T20 final, wouldn’t be intimidated against the three-time defending champions.

Taylor proceeded to walk the walk, scoring 59 to finish the leading run-scorer of the tournament.

The Sydney Thunder star was overshadowed by Matthews, who hammered three sixes in her knock of 66 off 45 balls.

“It was great to knock off such a good score to win the tournament, It was always going to be a hard total,” Matthews said.

The teenager couldn’t have picked a better time to deliver her maiden T20 half-century, which was also the highest ever score in a women’s World T20 final.

Taylor was on 42 when she belted the ball at Ellyse Perry, who was unable to hold the sharp caught-and-bowled chance.

Alyssa Healy almost completed a leg-side stumping when Matthews was on 64 but the right-hander did well to ground her bat in time.

There wasn’t even a hint of panic from Taylor until she slashed a ball to Jess Jonassen at point.

The equation was five runs off eight balls at that stage.

Dottin, who like Taylor benefited from a stint in the inaugural women’s Big Bash League, and Cooper held their nerve as Perry delivered the final over.

Cooper struck the winning runs after a wild throw from Schutt, who could have lobbed the ball back to Perry to complete a run-out.

“I wasn’t worried about anything, I said to myself no way in hell will Australia come back and win this,” Cooper said.

Dottin earlier dismissed both Villani and Perry, who lofted two sixes in a quick-fire knock of 28.

Dottin conceded a single run in the final over of Australia’s innings, one of many moments that Lanning will rue.

Lanning and Villani both scored 52 but neither woman was capable of kicking on quite like Matthews did.