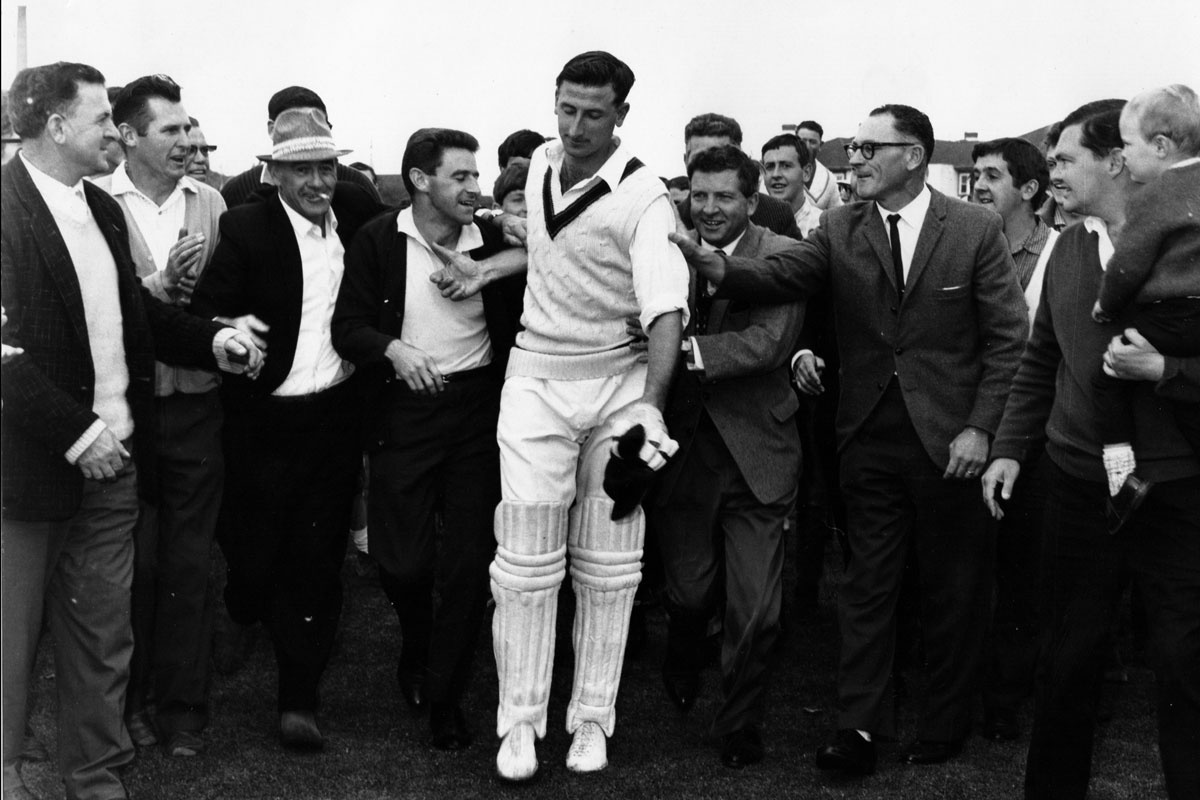 It wasn’t a Test match, a one-day international, a T20 whirlwind or even an interstate contest.

But it was a game to remember: the 1966 Grand Final of the Victorian Cricket Association’s first-grade competition, then known as District Cricket.

It took place over four days almost 50 years ago. Local cricket devotees recall it with enthusiasm and legends have grown up around it.

In 2000, the VCA Umpires Association voted it “the District match of the century”.

And somehow I found myself inside it, a left-hander batting at number five and an occasional off-spinner whose chief skills were variations on the straight break.

It was April, the setting for the game was the idyllic Albert Ground, a compact inner-suburban treasure with a minimalist scoreboard and the demeanour of an English village green.

It’s still there, just a 10-minute tram-ride from the heart of Melbourne, and it looks almost exactly the same.

My team, the lowly Northcote, was the underdog and we were taking on the might of Essendon.

Throughout the 1965/6 season, they’d sat atop the ladder and were enjoying a golden era that was to last until their premiership win in 1969/70.

We hadn’t won a flag since the 1911/12 season and had only made it into the finals a couple of times in the intervening years.

The track at the Albert Ground was fast and true. And nobody gave Northcote a chance.

Test opener and Victorian captain Bill Lawry was our leader. If the game had been a movie, his would have been the name above the title.

He inspired confidence in all of us: wherever he led, we followed, or at least tried to.

Still a few years away from being appointed Australian captain, he’d already earned a reputation for his steely will and indomitable spirit by scoring 130 in the famous Lord’s Test during the 1961 Ashes tour, a game that became known as “the Battle of the Ridge” because of the uneven surface at one end.

It was his maiden Test century and it was hard to imagine him ever playing a better innings.

But he was soon to begin one that ran it close.

Then there was the supporting cast. One of those lining up alongside Lawry was veteran Frank Brew, a left-arm wrist-spinner with a terrific googly and an unorthodox and very aggressive lower-order batsman.

He also played football on the wing for South Melbourne. Another was swing bowler Paul Shanahan (click the owl for a tribute to Paul Shanahan   ) the youngest player in the team was who later won plaudits as a footballer for Fitzroy, West Perth and West Torrens.

Among those on the other side were three fine cricketers who had either played state cricket or would in the near future: diminutive but fiery opening bowler John Grant, crafty leg spinner Keith Kirby, and dashing left-handed batsman John Swanson, also one of Australia’s great gully fieldsmen.

Then there was the trio of always dangerous batsmen who’d won reputations as Australian Rules footballers, all playing for the Bombers in the VFL: champion half-back flanker Barry Davis, one of the greats; classy fullback Greg Brown; and speedy rover and wingman Ian Monks, a true gentleman who left us in 2009 and “went on ahead” (an appealing euphemism I borrow from John Wayne).

Batting at number three for Essendon was Daryl Foster, who went on to coach West Australia to nine Sheffield Shield wins and, in 1991, to receive an OAM for his services to cricket.

Lawry was known as “the Phantom”, or “Phanta”, or even “Phanto”, after his liking for Lee Falk’s comic strip super-hero, although I never saw him with an issue in his hand.

Essendon skipper Monks won the toss and batted. At tea on the second day of the game, he declared the Essendon innings closed at a massive 9/514.

He’d led the way with an assured century, Wayne Robinson and I having combined at slip in spilling an early chance from him off fast bowler Mike Mitton.

After usually dependable opener Ray Howe’s duck, just about everybody else got a decent start, with Davis, chirpy keeper Tommy O’Neill and an unbeaten Kirby contributing half centuries.

Of our bowlers, only Shanahan with 4/143 off 34 overs kept the opposition honest, although the lively Mitton bowled without luck.

When Monks indicated his intention to declare, the Phantom shook his head in disbelief.

“I wouldn’t have done that,” Lawry muttered to Mitton as we walked off the field.

I learned afterwards of the contrasting moods in the two dressing-rooms between innings. Essendon was, not without reason, bursting with confidence. Monks had declared with the hope of being able to cut deep into our batting in the final session.

O’Neill was so sure that we’d succumb to the pressure of the occasion that he revved up his teammates by telling them: “All we need to do is get the Phantom out and we’ll be into the tail.”

Grant and Ken Adams were fired up to open the attack with “Rip” Kirby ready to add a further handful to his already handsome tally of wickets (over his 23-season career, he took 623 at an average of 19.68).

The champagne wasn’t quite on ice yet, but it had been ordered.

The mood in our dressing-room was a little more sedate. Lawry’s pep talk amounted to the simple declaration that, if we put our heads down, didn’t do anything silly and stayed the distance with him, we’d win.

Umpire Jack Collins confessed later that he’d overheard the Phantom say this when he and fellow-umpire Bill Smyth had passed our door, and thought to himself: “What a load of bullshit!”

I don’t know whether Lawry actually believed what he was telling us, but it certainly sounded like a good idea at the time.

By stumps on day two, the following Saturday, he and Robinson had made a very solid start.

We had 98 runs on the board without loss and were still daring to hope that the cricketing gods might smile upon us.

But then, by the time that bad light called a halt to proceedings on day three, the following Monday, we found ourselves in the box seat at 3/405. Still more than 100 runs to go, but the Phantom was 236 not out, while I was with him at the other end, on 77.

Essendon had worked hard in the field, but, like our bowlers, theirs had struggled to make any inroads (even though I, for one, couldn’t pick Kirby’s wrong’un).

Despite a couple of flutters against Grant, the Phantom’s batting skills and powers of concentration were turning the game around.

The game went into day four, the following Saturday, April 16. And the local media were suddenly paying attention. Nowadays, such is the abundance of cricket on offer, the VCA’s first-grade competition (which became known as Premier Cricket in 1990) barely gets a look-in.

But 50 years ago, it was different. And this game, over its two-week duration, went from minor coverage in the sports section to become headline news.

As a result, on the last day, the ground was packed with cricket lovers and others who’d turned up in expectation of a fairytale ending.

Even Prime Minister Robert Menzies was there, looking regal in his open-necked shirt.

So large was the crowd, in fact – estimates range between 5,000 and double that number – that the overflow led to people on St. Kilda Road, standing on their car roofs in order to catch a glimpse of what was happening inside the ground.

I got to 82 before edging a Ken Adams outswinger with the new ball to Monk at slip: 4/417.

A glimmer of hope for Essendon, perhaps. But the tail was still wagging and, when Brewy came to the crease, he made the result a formality.

His breezy 47 in 56 balls helped take us within 10 runs of victory. After his dismissal, with next-man-in Phil “Burnsy” Burn looking on from the other end, the Phantom applied the finishing touches.

“Essendon had a big score of 514, but Northcote showed what could be done when you all pitch in and make a few,” Lawry modestly told The Age during the post-match round-up.

Northcote had won, but Lawry’s superhuman effort and his ability to inspire those around him was what had given us the upper hand.

The club’s Westgarth Street base has now long been known as the Bill Lawry oval by way of celebration of his singular achievements, but, for me, the Phantom will always haunt the Albert Ground.

And I’ll also remember the 1965/6 season as being very much a case of my being in the right place at the right time.

Over the years, Northcote has regularly celebrated the game. In 2000, in acknowledgement of the Umpires Association verdict on it, the VCA hosted a dinner at Melbourne University, featuring Graham “Smokey” Dawson as MC, and with the umpires and the members of the participating teams present.

There have also been numerous less formal gatherings.

The Essendon players are usually invited and have always been gracious guests. However, the time eventually arrived when they’d clearly had enough.

When I found myself sitting on stage alongside John Grant at the VCA’s party in honour of the Phantom’s 70th birthday at the Crown ballroom, I mentioned to him that he and his teammates had been missed at the most recent Northcote event.

“It’s really nice of you to keep inviting us,” he explained patiently, “but you have to understand: we lost the bloody game.”

So, although they’re still welcome of course, it’s unlikely that he or his teammates will be in attendance at the 50th anniversary celebration of the match to be held at the Latrobe Golf Club on February 27.

And at the same time as the club will be revisiting the past – it has unearthed some amateur footage of the game – it also plans to launch a vision for the future.

Past and present Northcote players will be in attendance, including Rodney Hogg and Marcus Stoinis as well as the surviving members of the 1965-6 premiership team.

Tom Ryan is a former cricketer, a film critic and an occasional contributor to The New Daily. The greatest game of cricket you never saw