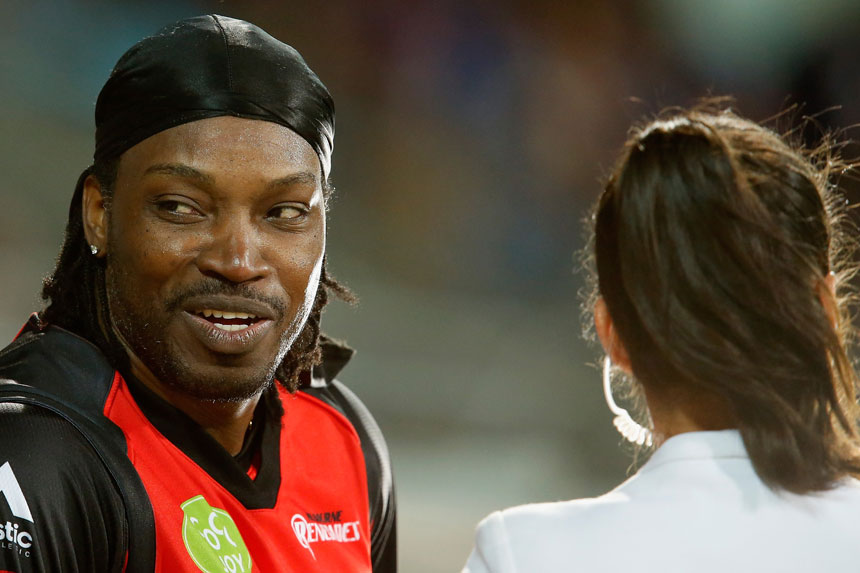 Channel 10 presenter Mel McLaughlin is annoyed with Chris Gayle after his comments to her during the broadcast of Monday’s Big Bash League match between the Hobart Hurricanes and the Melbourne Renegades.

McLaughlin was interviewing Gayle on the sidelines at Blundstone Arena after the West Indies star blasted 41 off just 15 deliveries in the Renegades’ comfortable five-wicket win.

But instead of talking about his innings, Gayle told McLaughlin – in front of the nation: “That’s the reason why I’m here, just to see your eyes for the first time.

“It’s nice so … Hopefully we can win this game and have a drink after.

“She was a bit angry … angry and upset I suppose,” Barham said.

“She was asking him legitimate questions about cricket and he ended up talking about her eyes.”

Gayle was condemned on social media for his conduct and Big Bash League chief Anthony Everard said his words were “disrespectful” and “simply inappropriate”.

Everard said he would be talking to Gayle and the Renegades about his conduct.

Gayle has been wearing a microphone during select matches of this Big Bash League campaign, but Barham confirmed that arrangement would not continue.

The batsman is expected to release a statement about his conduct later today.

Watch the interview below

The Gayle interview for those who missed it. Ugh. #BBL05 pic.twitter.com/HX9JgK5PwB