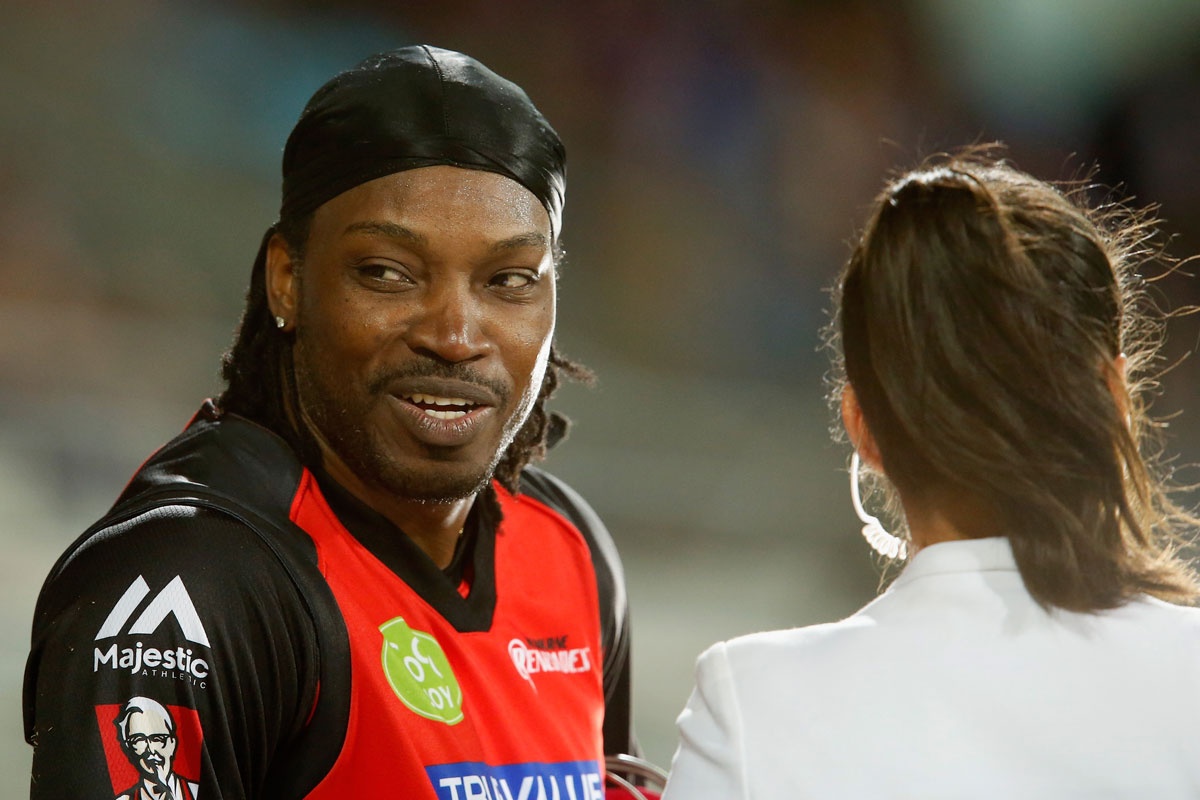 Melbourne Renegades have fined star batsman Chris Gayle $10,000 for inappropriate conduct – but said that his comments towards Mel McLaughlin did not ‘require a ban’.

West Indies star Gayle – one of the franchise’s two overseas players – told Network Ten sports reporter McLaughlin that he wanted to take her out for a drink after being dismissed in his side’s five-wicket Big Bash League win over Hobart on Monday.

“I wanted to come and have an interview with you as well, that’s why I’m here — just to see your eyes for the first time,” he said.

“Hopefully we can win this game and we can have a drink after, don’t blush baby.”

Watch the exchange below:

The Gayle interview for those who missed it. Ugh. #BBL05 pic.twitter.com/HX9JgK5PwB

McLaughlin was said to be ‘angry and upset’ with Gayle’s conduct, according to Network Ten boss David Barham, while Gayle brushed off the comments as a ‘simple joke’ during a Melbourne Airport press conference earlier on Tuesday.

But the comments generated a significant media storm and the Renegades were forced to punish their star import – with the fine donated to the McGrath Foundation, a breast cancer support and education charity in memory of the late wife of Australia legend Glenn McGrath.

“He has acknowledged that his comments were out of line.

“He has accepted it (punishment) in good faith. We’re taking it extremely seriously and that’s why we are here today. We are the family club.”

It emerged on Tuesday that Gayle’s TV blunder was not the first time he had tried to pick up a journalist – with Fox Sports’ Neroli Meadows recalling an incident in which she felt ‘intimidated’.

Meadows described Gayle as a ‘creep’ and that he had ‘creepy behaviour’.

Coventry said that others might be ‘utilising the situation’ and that a suspension was simply not appropriate.

“He just said the wrong thing at the wrong time. He’s copped that,” he added.

“I’ve read some of the comments (in the press). I’m sure there will be people coming out, utilising the situation to make comments, but we feel this sanction is appropriate.

“We just didn’t think the situation would require a ban – in any way shape or form.”

Coventry added that Gayle was ‘slightly overawed’ by the response to his comments – and that he was willing to apologise to McLaughlin, either on-air or off-air during Monday’s broadcast.

Earlier on Tuesday, Gayle himself said the situation had been ‘blown out of proportion’.

“There wasn’t anything meant to be disrespectful or offensive to Mel,” he said.

“If she felt that way, I’m really sorry for that.

“It was a simple joke. The game was going on. Entertainment, things get of proportion but these things happen.

“It wasn’t any harm done and like I said, I will leave it at that. I’m sorry for that. We have to move on – simple.”

“There’s no place in cricket or Big Bash League for those sorts of comments,” he said.

“The circumstances last night was live television and I don’t think anyone should be put in the position Mel McLaughlin was put in.

Cricket Australia have the right to add to Gayle’s sanction if they wish, but that was an avenue that Coventry hopes wouldn’t be explored.