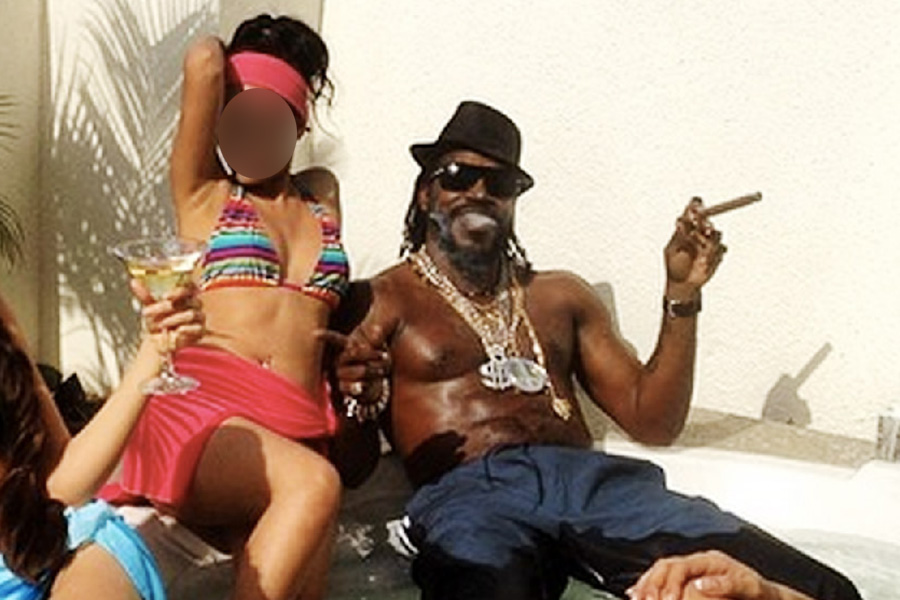 This week’s Big Bash incident wasn’t the first time playboy cricketer Chris Gayle has made an unwanted advance towards a woman, and it’s certainly not the first time a female sports journalist has been made to feel uncomfortable at her workplace.

“I wanted to come and have an interview with you as well, that’s why I’m here — just to see your eyes for the first time,” Gayle told an embarrassed McLaughlin.

“Hopefully we can win this game and we can have a drink after. Don’t blush baby.”

The interview infuriated many viewers, but apparently it did not have the same effect on some of the male commentators for the broadcast: ex-cricketers Damien Fleming and Mark Waugh, and Network Ten sports journalist Mark Howard. At least two of the men could be heard giggling wildly as Gayle delivered his humiliating performance.

In the wake of the disastrous interview, Howard apologised on-air, saying Gayle’s comments were inappropriate.

The controversy deepened when Fairfax Media reported that Gayle had allegedly “exposed himself” to a woman who worked “around the team” in the West Indies’ dressing room during a training session at 2015’s cricket World Cup in Sydney.

“As Chris’s management group, we have obviously been following recent events closely,” the statement read.

“It is important that anyone seeking to make false accusations against Chris be aware that Chris and his management will be considering all rights and legal options available.

“There will be no further comment from Chris or his management at this stage.”

Regardless of whether or not the reports are true, the incident with McLaughlin appears not to have been a one-off.

On Tuesday, female sports journalists accused Gayle of making similar sexist comments, and added that his behaviour was common in the sports media industry.

Journalist Angela Pippos told The New Daily that female journalists routinely felt like “sex objects” in their workplaces rather than media professionals.

“That kind of behaviour is rife,” she said. “I’ve very much felt it and other women journos … have felt like a sex object more than a journalist,” she said.

Speaking to ABC Grandstand, Fox Sports journalist Neroli Meadows said Gayle had an ugly habit of being demeaning to women.

“Chris did this to me five or six years ago when he first joined the [Sydney] Thunder.

“The entire squad was in the back of that press conference.

“He went at me once in the press conference. Ok, fine, whatever, you’re having a laugh, you’re Chris Gayle. He did it again. It’s cringy, you could almost hear the cringing.

“And then to come up afterwards, stand over me: ‘so when are we going for this drink?’

“He’s a big guy, it makes you feel intimidated.”

ESPN Cricinfo’s Melinda Farrell was then emotional discussing Gayle’s behaviour towards women during the same broadcast.

“She (McLaughlin) just shouldn’t have been put in that position, she was clearly uncomfortable,” Farrell said.

“Neroli, you don’t know this because we’ve never discussed it, but he did the same thing to me just before that press conference when I was there getting interviews for Fox Sports.”

Ms Pippos said she’d been experiencing sexism in sports journalism since the start of her career more than eighteen years ago.

“[I’ve put up with] sexist innuendo, inappropriate comments, or even not being able to find a female toilet.”

“It happens, situations like that, 10 times a day when you’re a female in this sports industry,” she said.

Also embroiled in the saga were commentators Howard, Fleming and Waugh.

Some of them (it was unclear who) could be heard laughing whilst Gayle insulted McLaughlin with his “don’t blush baby” jibe.

The New Daily approached Network Ten for comment and from the trio, but the network declined.

A spokesperson for Network Ten referred the questions to the on-air apology made by Howard.

“It must be pointed out that Mel is a wonderful, professional, informed sports broadcaster and a valued member of Network Ten,” Howard said after the interview.

“On reflection, I don’t think that is appropriate for what is required in that format.”

Waugh and Fleming watched on in silence as their colleague spoke.

Some Twitter users pointed out that Howard had joked only minutes before the incident that Gayle’s groin might be sore from “overuse”.

Nevertheless, Ms Pippos congratulated Howard for making the eventual apology, but said the commentators’ laughter was symptomatic of the way “casual sexism” was too easily accepted in Australia.

“It infuriates me,” Pippos said. “And a lot of women would feel this in a whole range of professions.”

“It is about changing the culture in these workplaces and the best way to do it is to call out episodes like this.”

Chris Gayle’s playboy past comes back to haunt him