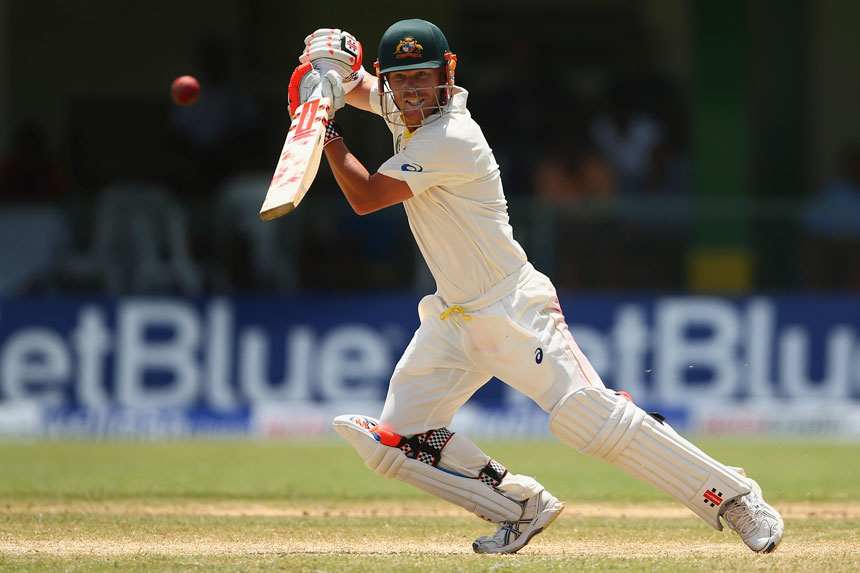 David Warner’s hint that he may be a bat for hire should send shudders down the spines of cricket administrators around the world.

Warner told ESPNCricinfo that “you can’t put a price on the baggy green”.

But, Warner added, if a private promoter came in and changed the ground rules, he would be forced to follow the money.

• Cricket’s crooks and jihadists
• The Ashes will be tough, but we’ve prepared well
• Is Gilchrist the best player of the 21st century?

Warner was responding to noises that the Indian-based Essel Group was considering a cashed-up splurge on a private Twenty20 league featuring the game’s best and most marketable players.

He was mooted to be on Essel Group chairman Subhash Chandra’s shopping list with Australian captain Michael Clarke.

A figure of $50 million over 10 years was being bandied around to secure Warner’s services, a tad more than his current annual earnings of approximately $3.8million.

This is not the first time that Chandra has made a grab for a slice of the world cricket market.

In 2007, he established a Twenty20 competition, the Indian Cricket League (ICL), funded by the Group’s media arm, Zee Entertainment Enterprises.

The ICL stemmed from the BCCI’s [Board of Control for Cricket in India] repeated refusals to grant Chandra the domestic rights to Indian cricket. In response he formed the ICL, encompassing teams from across India, Bangladesh and Pakistan.

The League attracted players from the periphery of Indian cricket, underpaying Test-playing countries, and fading stars who wanted a good pay-out before retirement.

The BCCI, supported by the ICC, had ‘gazumped’ Chandra with its own Twenty20 competition, the franchise-based Indian Premier League (IPL).

But Chandra still hankered for a slice of the cricket pie.

Not all has run smoothly for Chandra since the ICL’s demise.

More than 50 players still remain unpaid, though in the past month, 12 have received payments of $US280,000 through the Mumbai courts.

But Chandra has learned from his ICL days.

If the new competition gets off the ground, Chandra has sought to reassure that players’ salaries may be guaranteed by the banks.

How it could spell the end for Test cricket

As Warner stated, his preference lies with playing under the baggy green.

As the world’s most destructive batsman he may well earn $50 million over the next 10 years by tweaking upwards his current contractual arrangements.

But the amounts being speculated by Chandra will sway many players from cricket’s second-tier Test match countries, not to mention the ever-improving minnows.

As Warner noted, this will gut cricket’s Test-playing ranks, burying the longer format once and for all.

Chandra believes in both the liberalisation and globalisation of the cricket market.

Cricket should be controlled less by centralised boards and the ICC [International Cricket Council], and be more open to global media market forces.

With a personal net worth of $US3.9 billion, according to Forbes, and a diversified business portfolio that stretches from media and education to precious metals, Chandra has enough cash in the kitty to have a seismic impact on the game.

Chandra also recognises the business opportunities created by the global reach of the Indian diaspora.

Second only to the Chinese, India’s diaspora numbers are upwards of 25 million, with 4.3 million in North America and almost six million in the Gulf States and Arabian Peninsula.

These are largely untapped cricket markets which, if accessed, have the potential to shift the game beyond its traditional boundaries.

His model, if successful, will be an India-centric, Twenty20 product tailored for the South Asian and diaspora markets.

The likes of Warner, Clarke and other Australians – if they sign – will be overpaid bit players, needed because of their popularity on the sub-continent and high profile in the game’s traditional markets.

Has the process already started?

If Chandra’s plans come off, it will be the biggest challenge the game’s administrators have faced.

As Warner suggests, Test cricket will be pushed to the periphery.

Given the demise of the current West Indian Test team, and the comparative popularity of the Caribbean Premier League Twenty20 competition, this process has already begun in some of cricket’s traditional regions.

Chandra’s money will just hasten the process in the rest.

Whether we like it or not, cricket may well be entering a brave new world.

Subhash Chandra and his troupe may end up the winners, but the game will be the poorer if all this is achieved at Test cricket’s expense.

Let’s hope that David Warner has got it wrong – once again.

The rebel league that could end Test cricket