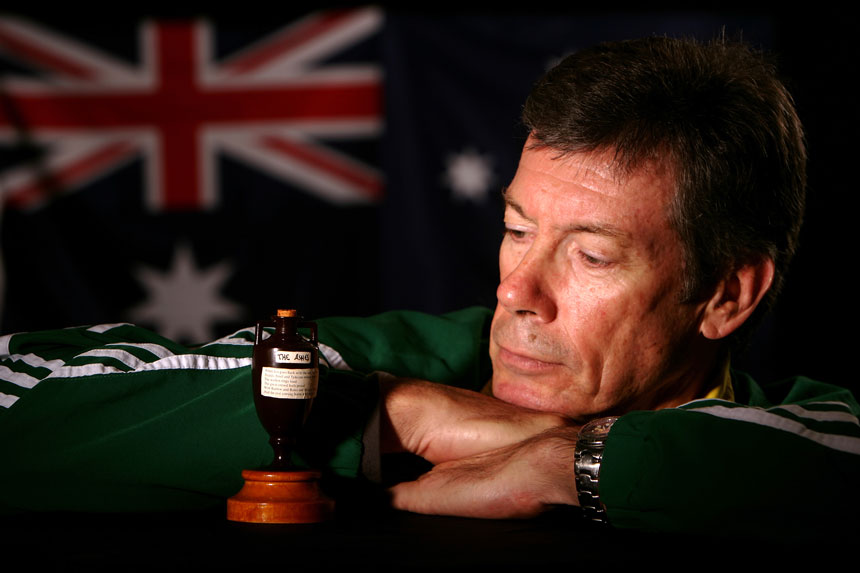 The tough nature of a lengthy Ashes tour means Australia will have to be close to their best to defeat England this winter, former coach John Buchanan believes.

Buchanan is the last man to lead Australia to Ashes success on foreign soil, achieving the feat in 2001.

The ex-coach, who led Australia to two World Cup wins, was also in charge in 2005 when England regained the famous urn for the first time in 16 years.

• Smith top dog in Test batting rankings
• Windies blown away, Australia turns to Ashes
• Why Johnson should be dropped for the Ashes

England won at home in 2009 and 2013 as well, with the swinging Dukes ball and hostile crowds making life tough for the touring Aussies.

A 5-0 thrashing of England in the 2013-14 summer – the second whitewash handed out by Australia in seven years – will be etched into the memory of most cricket fans Down Under.

But a repeat is highly unlikely given the strain put on players during a tour that spans more than two months.

“Winning away from home is never an easy affair, particularly when it’s a five-Test series,” Buchanan told The New Daily.

“That [longevity] can make the task a little bit harder again, because you can win one game but it doesn’t guarantee that you are going to continue to do that over the course of a long series.

“And of course, a long series, when you are away from home, brings in a lot of factors. There’s living and travelling away from home and getting used to new hotels and conditions, virtually every week.

“You are locked together as a group. [But] if you are a very harmonious group, that can really bring you together as well.

“That’s part of the reason why we were very successful in 2001. Everything gelled together and we were pretty well prepared for that tour.”

Buchanan felt in 2005, when England edged Australia 2-1 in a famous series, that his side did not prepare as well as they could have – and that it cost them.

But he feels Australia’s build-up on this occasion has been just right.

“We decided to have a six-week break away from the game and were then going to use the one-day series as a way to get ourselves ready for the Test series.

“Hindsight would show that was probably not the right approach. It might have freshened us up mentally but it certainly wasn’t the right approach in terms of being technically and physically well prepared for a very tough series.

“I think this time, Australia’s preparation will be a significant advantage to them.

“When they get to England, they’ll play a couple of lead-up games, which are long games, nothing to do with the short game, and then they are straight into a Test match.

“That preparation is a real plus.”

Buchanan also offered his view on Australia’s bowling conundrum ahead of the first Test.

Josh Hazlewood and Mitchell Starc are in excellent form, while Ryan Harris is set to return after the birth of his first child.

Where that leaves Mitchell Johnson remains to be seen, although with 37 wickets at 13.97 against England in the 2013-14 summer, Buchanan believes he probably will play.

“It will depend very much on whether the selectors believe they are going to swing the ball and whether the conditions allow them to do that,” he continued.

“Or do they believe that bounce and pace will be their primary tactic?

“If they are swinging the ball then players like Harris, Hazlewood and Starc probably present as your first options.

“If they believe they want to go with pace and bounce, that brings in Johnson as well.

“And I guess at the moment, Johnson is still their lead bowler, so they would expect to take him in either way.”

John Buchanan now runs Buchanan Success Coaching and travels the world offering regular workshops and seminars to top companies, sporting teams and business networks about the lessons he has learned in sport and how they can be applied – both in the boardroom and on the field.

Matildas will be keen to forget 7-0 drubbing by Spain
Upcoming stats will reveal where and how hard rates are hitting economy
Victorian MPs pocket a tidy 2.75 per cent pay raise
Reserve Bank review isn’t a ‘get the governor’ exercise: Jim Chalmers
‘Violence for weeks’ feared after landmark US abortion ruling
Aussie Hannah Green within striking distance of Women’s PGA Championship lead
England finds form ahead of Ashes series
Today's Stories

The Ashes will be tough, but we’ve prepared well