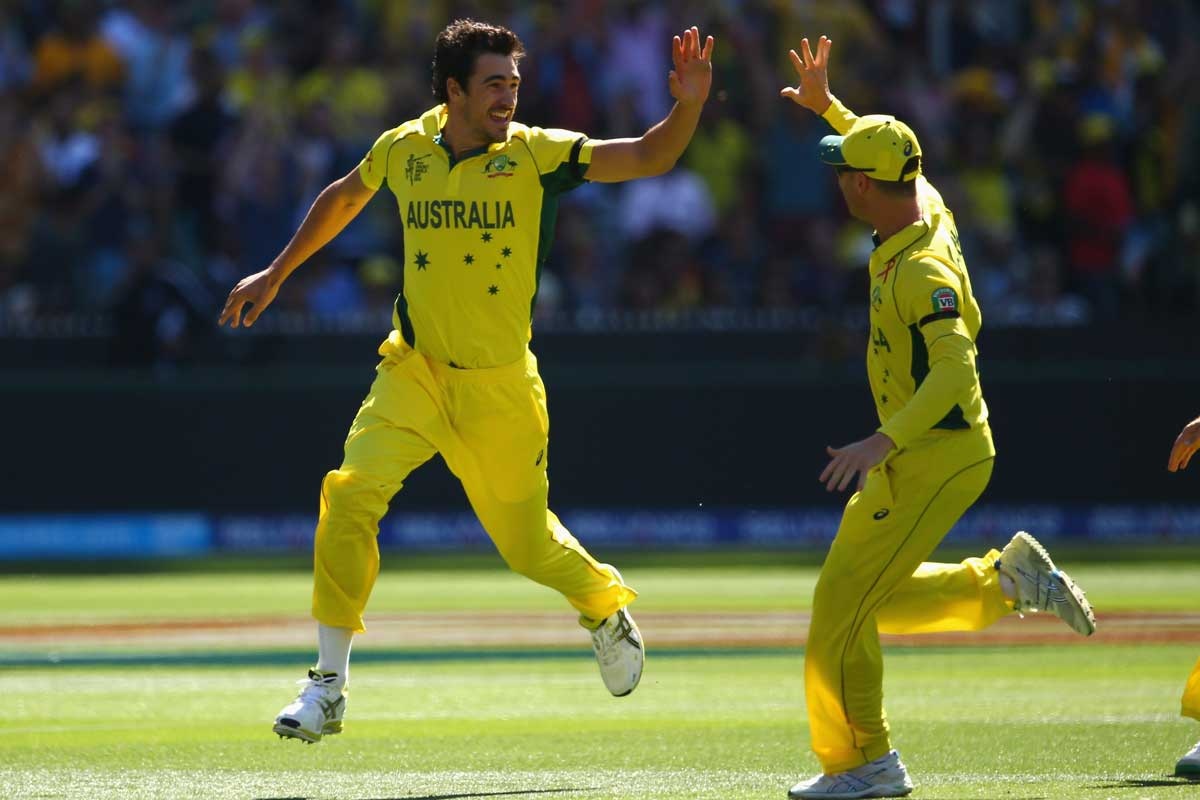 Captain and captain-in-waiting combined as Australia wrapped up a fifth World Cup title with a seven-wicket win over New Zealand in Sunday’s final at the MCG.

Michael Clarke top-scored for Australia with 74 in his 245th and final ODI.

Steve Smith, the man widely tipped to be Clarke’s successor, finished 56 not out and stroked the winning runs with 101 balls remaining.

• Michael Clarke retires from ODIs
• Hoggy: let’s go back to the scene of the crime
• Clarke: trans-Tasman final “extremely special”

The 112-run stand guided Australia to victory after Grant Elliott’s plucky 83 pushed the Blackcaps to a total of 183, their innings ending after 45 overs and a woeful collapse of 7-33.

Clarke dedicated the title to the memory of Phillip Hughes and thanked teammates for supporting him in his bold bid to play the tournament after hamstring surgery.

“We played this World Cup with 16 players and tonight is certainly dedicated to our little brother and teammate Phillip Hughes,” Clarke said.

“Hughesy used to party as good as any of them, so I will make sure we drink two at a time – one for Hughesy and one for us.”

“I couldn’t have asked for anything more,” Clarke added.

“The support I have received since coming back into the team (has been fantastic).

“They certainly deserve to stand here tonight and hold that trophy up.”

From the moment Brendon McCullum was dismissed for a duck in the opening over at the MCG, the trans-Tasman tussle was on Australia’s terms.

But the visitors simply didn’t have anywhere near enough runs to play with.

Clarke and Smith were in the middle when the hosts eased past the halfway mark of their chase in the 19th over.

The pair remained there until Clarke was bowled by Matt Henry when the victory equation was nine runs from 19 overs.

“He’s been a terrific ODI player for a long time,” Smith said of Clarke.

“I just wish he was out there with me until the end. I was just saying `Pup, Pup – stay with me!’. Unfortunately he got out.”

Smith brought up the winning runs by pulling Henry to the fence, with his teammates charging onto the field in celebration and a record crowd of 93,013 getting to their feet.

“The bowlers really set it up for us on a great wicket,” Smith said, having starred in every knockout game the Australians played.

The result means Australia have won four of the past five World Cups, with a quarter-final exit in 2011 the only blemish in the stretch.

McCullum won the toss but fell victim to a superb in-dipper from Mitchell Starc, who finished with two scalps and was named man of the tournament.

New Zealand stumbled to 3-39 in the 13th over, with dangermen Martin Guptill and Kane Williamson back in the sheds after tame dismissals to Glenn Maxwell and Mitchell Johnson respectively.

Elliott shared a 111-run stand with Ross Taylor, the pair knuckling down particularly well in a two-over spell from Starc.

Taylor’s dismissal, engineered by James Faulkner but completed thanks to a diving one-handed catch from Brad Haddin, was the beginning of the end.

Faulkner, with three wickets, was named man of the match.

McCullum, Corey Anderson, Luke Ronchi and Henry all failed to get off the mark – thanks to a mix of poor batting and potent bowling.